Companies have a number of ways they can spend their excess cash, including acquiring companies, paying dividends, and repurchasing shares. Tech giant Apple (NASDAQ:AAPL) does all of these. But it spends far more repurchasing shares than it does making acquisitions or paying cash to shareholders. Indeed, since the company initiated a dividend and share-repurchase program in 2012, it has bought back a whopping $127 billion worth of Apple stock.

With $48 billion of its $175 billion authorized for share repurchases left after the end of its fiscal third quarter, how many shares could Apple repurchase in fiscal Q4?

The best way to guess how many shares Apple could repurchase this quarter is to look back at how much Apple has been spending on repurchases recently.

In fiscal Q3, Apple repurchased about $10 billion worth of its own shares. While this is a huge sum, it's notably about in line with the company's average spending on repurchases since April 2013, when Apple gave its capital return program its first of four significant annual boosts to date. And repurchases haven't cooled off recently; in the four quarters leading up to Apple's most recent quarter, the company averaged about $9 billion on share buybacks each quarter. 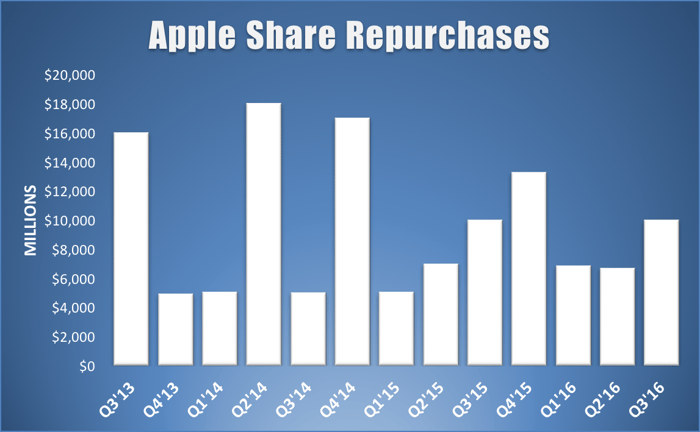 Going forward, Apple's quarter-to-quarter spending on repurchases is likely to vary, but money spent on share repurchases should continue to average around $9 billion each quarter. Apple's share repurchases in Q4, therefore, will fall somewhere around a range of $7 billion to $12 billion.

Apple's announcement earlier this year that it was increasing its share-repurchase authorization from $140 billion to $175 billion highlights the company's ongoing commitment to continue repurchasing shares, and it further supports a forecast for more of the same when it comes to repurchases.

But is Apple stock getting too expensive?

Despite the Apple board's recent boost to the company's share-repurchase authorization, some investors may wonder if management might limit stock buybacks since shares have rebounded recently from around $90 per share in May to about $106 today. After all, share repurchases make more sense when the stock can be bought at a discount to fair value. And a higher price means Apple's money spent on repurchases doesn't go as far.

But there are two key reasons Apple will probably continue to buy back shares aggressively, even with shares trading around $106.

First, in calendar 2015, when Apple stock was trading mostly between $110 and $130, Apple averaged $9.3 billion per quarter on share repurchases. This suggests management believes Apple stock is still a solid value at prices above $105. 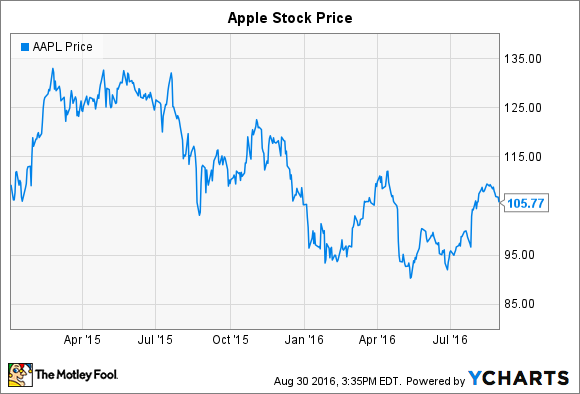 Second, despite Apple stock's recent run-up, the stock still has a surprisingly low price-to-earnings ratio of 12. It's difficult to argue that Apple is overvalued with a valuation like this.

With Apple stock trading around $106, there's no reason for management to rethink its share-repurchase program. Investors, therefore, should expect Apple to continue prioritizing share repurchases as the company decides how to allocate its excess cash.

How Much Will Apple, Inc. Spend Repurchasing Its Stock This Quarter? @themotleyfool #stocks $AAPL Next Article
Current