Canadian miner Teck Resources Ltd (NYSE:TECK) has been hit, like all miners, by the commodity downturn. But entering 2016, it was facing a big headwind -- debt -- and at a time when it was still spending heavily to build a new oil sands project. This is why Teck Resources Ltd's best moves in 2016 so far have been all about dealing with that debt, but maybe not in the way you may think.

When Teck started out the year, its debt amounted to about $7.7 billion. At the time, that was around 37% of the capital structure. That's a little bit high for the company, since debt was around 29% of the capital structure at the end of 2013 and totaled roughly $5 billion. A big part of the debt problem has come from the company's late-2013 decision to go ahead with the Fort Hills oil sands project, a multibillion-dollar expense, at the same time that commodity weakness has been pressuring revenues.

But Teck did something about the debt overhang it was facing through a series of key capital markets transactions. And, at the end of the second quarter, following those vital moves, debt stood at about $7.7 billion, basically unchanged, and accounting for around 35% of the capital structure -- a slight improvement, but not a material one.

In other words, Teck's debt levels didn't really change much. So, what did the company do?

It's the due date

There are two things to consider when it comes to Teck's debt: How much is there, and when is it due? There's no doubt that, long term, Teck would like to bring its debt load down, but it's making a big investment in a new business, the Fort Hills oil sands project. Fort Hills won't come online until late 2017 at the earliest, and it won't hit full production until a year after first oil. So, there's big up-front spending, and the payday comes later -- that's how most mining projects work. Once Fort Hills is up and running, look for Teck to start reducing its debt balances.

For now, Teck just has to live with a little more debt than it may like. The bigger issue is getting to the payday at Fort Hills, which is where due dates come into play. When 2016 began, a big chunk of Teck's debt was coming due in 2017, 2018, and 2019. At the same time, Teck was still facing at least another billion dollars in expenses for Fort Hills. That's just bad timing.

In response, Teck did two very important things. First, the company initiated a tender offer for up to $1.25 billion worth of debt coming due between 2017 and 2019. Second, the company issued $650 million of five-year notes and $600 million worth of eight-year notes. These two moves, along with an extension of the company's credit facility from June 2017 to June 2019, changed the game in a big way. 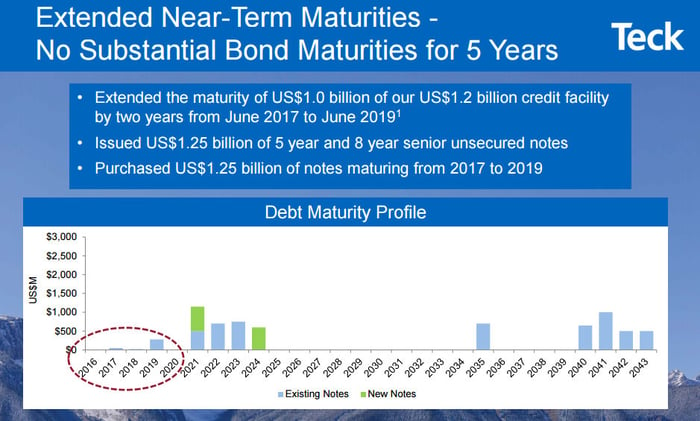 Essentially, Teck bought itself time by pushing out the due dates for its debt. Its debt levels didn't change much, but now it doesn't have to worry about paying its debt balances off until 2021 or so, after the Fort Hills project is expected to come online. With any luck, commodity prices will be higher by that point, too.

It isn't always the number

By far, Teck Resources Ltd's best moves in 2016 are all about debt. But it has nothing to do with how much debt the miner has, and everything to do with when it has to pay. Essentially, the company created some breathing room so it can build Fort Hills and wait out the commodity downturn. Teck will worry about the debt balance some other day.