Stocks spent nearly all of Tuesday's trading session in negative territory and ended the day with losses. However, continuing a trend of remarkably low volatility this summer, the Dow Jones Industrial Average (DJINDICES:^DJI) and the S&P 500 (SNPINDEX:^GSPC) indexes each fell by less than half of a percentage point.

In economic news, consumer confidence rose to a one-year high as people reported improved readings and expectations on the job market and on general business conditions, according to the Conference Board. The surprise uptick points to potentially faster growth this quarter and could factor into the Federal Reserve's debate on whether or not to raise interest rates in late September. Featuring more prominently in that discussion will be this week's job report, due out before the market opens on Friday. 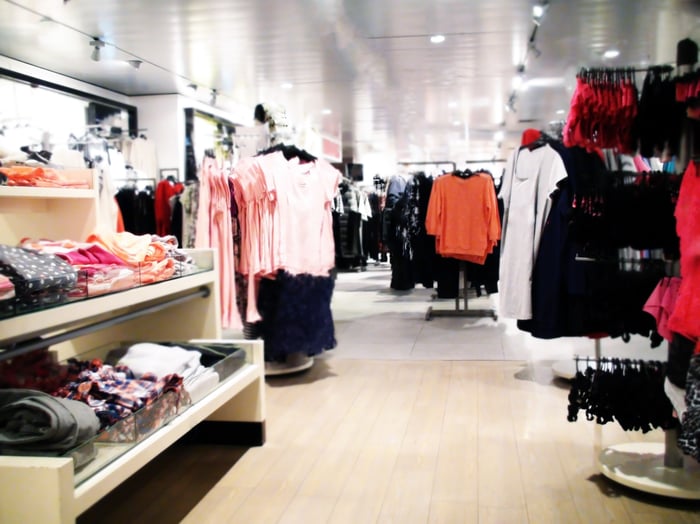 Teen retailer Abercrombie & Fitch's stock plunged 22% on over 10 times its normal trading volume after the company posted steady fiscal second-quarter earnings results while cutting its 2016 outlook. Revenue and profits held up relatively well, with comparable-store sales falling by 4% -- just as they did in the prior quarter.

The Hollister brand was flat, and the Abercrombie brand's comps pace improved to a 7% drop from an 8% drop in the prior quarter. Gross profit margin didn't budge at 62%, indicating solid expense management. "Our results for the quarter were largely in line with the expectations we set on last quarter's earnings call," executives said in a press release, while noting that customer traffic was a "significant headwind."

Meanwhile, the retailer downgraded its outlook significantly. Rather than projecting improving sales trends in the second half of the year, as management forecast in late May, ANF now expects the current negative growth pace to continue at least through the next six months as foreign tourists hold back their spending at major U.S. locations. That sour reading contrasts with other retailers, like Macy's (NYSE: M), who have seen improving tourist shopping trends lately. Abercrombie's persistently weak customer traffic suggests the company needs to take a hard look at its product, marketing, and promotion strategies to find opportunities to defend market-share loses.

Hershey dropped 10% after Mondelez (NASDAQ:MDLZ) officially gave up its efforts to purchase the chocolate specialist. After two months of discussions -- and multiple offers that began at $23 billion -- the company ultimately couldn't convince Hershey to join forces. "We determined that there is no actionable path forward toward an agreement," Mondelez executives explained in a press release.

It appears Hershey Trust, an independent entity that holds voting control over Hershey, was a significant roadblock to engineering a deal. The company's management also saw Mondelez's $107 per share offer as far too low, according to The Wall Street Journal.

That said, it makes sense that Mondelez shares rose following the break-up news; $23 billion was a steep price to pay for a company that's struggling with declining revenue -- even one that controls several of the most iconic brands in candy.

Meanwhile, Hershey shareholders should shelve the idea that their business will be an acquisition target any time soon. That's a shaky investment thesis in any case, but it's even less advisable here, where a third party has veto power over any potential deal and has used that power to scuttle several potential buyouts over the years.