In America, death rates have been dropping for nearly all leading causes of death, according to a government report. That means you could easily have several decades to think of fun things to do during your retirement. Unfortunately, a longer life also means more opportunities for an ugly stock market downturn that could torpedo your portfolio.Your goal for retirement may be to join a punk rock band, climb Mount Everest, or just watch a lot more TV. But whatever your plans may be, you'll have a lot more fun if your investments provide steady, growing income.

So how can you protect yourself? One approach is to focus on less volatile stocks that will pay you a growing dividend.

In addition, the healthcare sector is a terrific place to look for retirement stocks.The sector tends to outperform the broader market: As measured by the Health Care Sector SPDR ETF (NYSEMKT:XLV), healthcare has gained 126% over the past 10 years, whereas the S&P 500 has gained 68%.

With the exception of biotechs, healthcare stocks also tend to hold up better in bear markets. During the 2007-2009 bear market, the S&P 500 lost 50% of its value, while the Health Care SPDR ETF took only a 39% dip. Sweetening the pot further, two major trends will likely keep this sector pumping for a long time. As people age, they need more healthcare, and the number of those aged 65 and over is forecast to nearly double to 83.7 million by 2050. In addition, the rise of the middle class around the world, particularly in Asia, means the demand for healthcare should grow abroad as well.

While the healthcare sector is rife with opportunity, you might start your search with the following three stocks.

Johnson & Johnson: solid as they come

Few stocks can match global healthcare titan Johnson & Johnson's (NYSE:JNJ) epic performance. It has increased its dividend for 54 straight years, and it has been soundly beating the market for decades. Here's how it stacks up to the S&P 500 over the past 30 years: 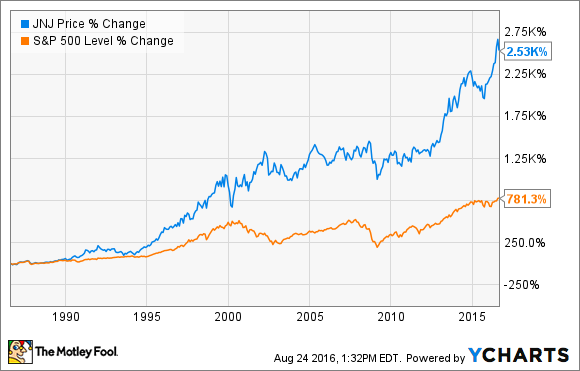 And that's not even including reinvested dividends, which would have doubled Johnson & Johnson's return over that period.

One of the greatest things going for J&J is its growth consistency. The company has achieved solid earnings increases for 32 straight years. Its earnings growth consistency owes largely to the fact that the company has over 250 subsidiaries covering three divisions: consumer health, medical devices, and pharmaceuticals. That kind of diversity means the business can put up great numbers overall, even if a particular subsidiary is lagging.

While J&J's consumer health and medical-device segments are generally lower-margin and tend to be slow or flat in growth, J&J's high-margin pharmaceutical sector has been lighting a fire under this stock. The company has seen great commercial success with drugs such as Imbruvica, which it's marketing in partnership with AbbVie. Imbruvica's first-half 2016 sales doubled year over year to $556 million, and annual revenue is expected to peak at more than $5 billion before long. Invokana, another fast-growing drug, could potentially bring in more than $1 billion annually. J&J's pipeline should bear fruit as well: The company has announced plans for 10 new large-scale drugs to reach the market by 2019.

There is one caveat to all this: J&J currently trades at nearly 23 times its trailing-12-month earnings. That's a hefty ratio, even considering this company's history of commanding a premium. Further, it's yield of 2.7% is slightly below its five-year average yield of 3%. I've owned J&J a long time, and I consider it a "forever" stock. However, I think it may be due for a pause, or perhaps even a temporary pullback, which would allow investors to get in at a better price point.

Don't get me wrong -- J&J is still one of the best names retirees can buy long-term. With a perfect "AAA" credit rating and plenty of cash on hand, this company epitomizes a safe long-term bet.

Pfizer: thrown off track but coming back

While J&J's stock has been on a tear, the second-largest drug manufacturer in the world, Pfizer, Inc. (NYSE:PFE), has been a laggard until recently. That's good news for investors, because it means the stock has some room to catch up.

Pfizer has been suffering from patent losses, but last quarter, overall revenue grew 11% from the second quarter of last year. That's amazing, considering what the drugmaker rakes in on a quarterly basis. Revenues totaled $13.1 billion in Q2, an increase of $1.3 billion from the year-ago quarter. While some of that bump was due to the consolidation of its Hospira acquisition, Pfizer has a key growth-driver going forward in the oncology segment, beginning with the newly approved breast cancer drug Ibrance.

Pfizer also has a strong free cash flow, which rang in at $13.8 billion over the last four quarters. That comfortably covers the $7.1 billion the company paid out in dividends. The giant pharma has also been making some smart acquisitions recently, including Anacor Pharmaceuticals and Medivation. Both deals will add some needed zip to the pharma's pipeline. In addition, Medivation's already marketed prostate drug Xtandi is projected to be one of the top-selling oncology drugs by 2021. The drug could achieve $7 billion in sales, which would really bulk up Pfizer's branded-drug portfolio.

What about the dividend? It was recently raised 7.7% to $1.12, which lifts the yield to 3.4%, well above the S&P 500 average of 2.1%. Over time, that dividend looks set to keep growing. Assuming Pfizer's share price also moves up, buying this pharma now could lead to a sweet cost-basis yield in your retirement.

The healthcare sector contains much more than drugmakers. Some of the most lucrative and defensive stocks available are healthcare insurance providers. Despite worries that Obamacare would spell disaster for this sector, the industry has posted growth since the bill passed. Among the companies raking it in, UnitedHealth Group, Inc. (NYSE:UNH) stands out as offering the best of both worlds: dividend income and earnings growth.

While United Health currently offers a modest dividend of 1.75%, that's higher than the current yield from competitors Humana, Cigna, and Aetna. In addition, United has a commitment to returning value to shareholders: It raised its dividend by 25% this year and by 33% in 2015.

Powered by its health-services arm, Optum, which showed revenue jumping 51% to $20.6 billion, the company posted a strong earnings beat last quarter and lifted the low end of its guidance for 2016. Better yet, to axe any losses related to Obamacare that could pull down overall earnings going forward, United has said it will exit a number of unprofitable exchanges.

All three of these stocks should keep paying out growing dividends that will make your retirement sweeter. That just leaves one big question unanswered: What will you do with all that free time and all that dividend income?

Well, how about joining that punk rock band? Here's what Jodina, the lead vocalist for Arizona punk band One Foot in the Grave, had to say: "Just 'cause you're old doesn't mean you can't get up and do something different."