Warren Buffett-led Berkshire Hathaway (NYSE:BRK.A) (NYSE:BRK.B) is renowned as one of the most diverse and well-run businesses in the United States. However, no stock is without downside risk, and Berkshire is no exception. Here are three things that could cause Berkshire's shares to drop, and whether you should be worried about them.

A crash or correction in the overall stock market would almost certainly cause Berkshire Hathaway's stock to fall. And while the stock generally does better than the market during downturns, it isn't immune to dropping. During tough economic times, Berkshire has shed more than half of its value from its high point. It's happened three times before, and it could easily happen again.

Warren Buffett has warned shareholders not to expect Berkshire to perform well over any short time period. In his 2014 letter to shareholders, Buffett had this to say when discussing his predictions for Berkshire's next 50 years:

"Since I know of no way to reliably predict market movements, I recommend that you purchase Berkshire shares only if you expect to hold them for at least five years. Those who seek short-term profits should look elsewhere."

In other words, Berkshire has its share of ups and downs, just like virtually every other stock. However, there have rarely been periods of five years or more where the stock would have produced a loss. And it's also important to point out that there has never been a 10-year period where Berkshire Hathaway finished lower than where it started. 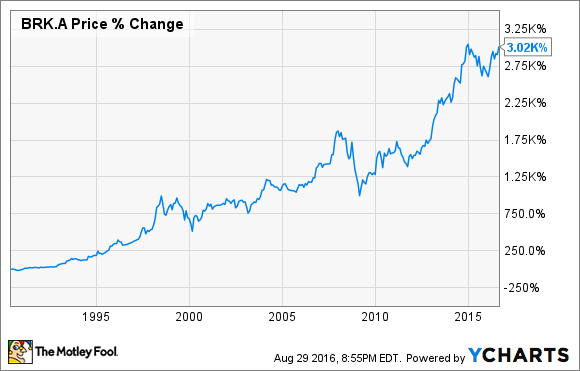 2. When Warren Buffett steps down

Warren Buffett turned 86 years old on April 30, and while we wish the Oracle of Omaha many more years of health and happiness, the reality is that he will not be at the helm of Berkshire forever. For all we know, he could decide to step down and let others take the helm while he's still around to watch and offer his guidance.

To be clear: Berkshire Hathaway has stated many times that it has a post-Buffett plan in place, including having a tentative CEO picked out. Buffett even went so far as to say that "Berkshire is ideally positioned for life after Charlie (Munger) and I leave the scene." It's an internal candidate, and while there has been speculation over who it may be, Buffett has said that "In certain respects, this person will do a better job than I'm doing."

Buffett also plans to have several safety nets in place after he's gone, including recommending his son Howard as non-executive chairman, so in the unlikely event the wrong person is made CEO, the person could be removed relatively easily. Buffett has also been giving his two stock-pickers, Ted Weschler and Todd Combs, more and more independence to make investment decisions with Berkshire's capital.

The point is that Berkshire as a business will be just fine in the post-Buffett era, although there will undoubtedly be some selling pressure on the stock when Buffett leaves the CEO's office.

However, there's a strong case to be made that low interest rates do Berkshire much more harm than good. For starters, Berkshire's insurance businesses, such as GEICO, earn money by investing the premiums collected that haven't been paid out yet. And Berkshire has more than $72 billion in cash on its balance sheet, currently earning minuscule interest rates.

In addition, Berkshire's stock portfolio has lots of financial stocks, which could see profits climb tremendously if interest rates begin to normalize. In addition to its massive stake in Wells Fargo, Berkshire also owns shares of US Bancorp, American Express, Bank of New York Mellon, and Goldman Sachs, not to mention billions of dollars' worth of Bank of America warrants.

The market expects interest rates to rise, and the consensus on when the Federal Reserve will raise rates next keeps changing. However, the point is that the prospect of future rate hikes is likely priced into Berkshire -- at least to some degree. If economic data starts turning sour and the Fed decides to hold off for longer than experts predict, it could cause Berkshire to drop.

Market volatility will certainly happen, and interest rates could potentially stay near record lows for several more years. And, while Buffett could theoretically step down tomorrow -- I'm writing this the day before his birthday -- I don't see it happening for another few years at least, but it's going to happen at some point.

The bottom line is that there are several things that could cause Berkshire's stock to drop, but virtually any reason I can think of would be nothing more than temporary weakness in an otherwise rock-solid business. If you noticed, not one of the three reasons I discussed has anything to do with Berkshire as a business. So any short-term weakness should be looked at as a buying opportunity. Over long periods of time, Berkshire shareholders should be extremely happy with their investment.