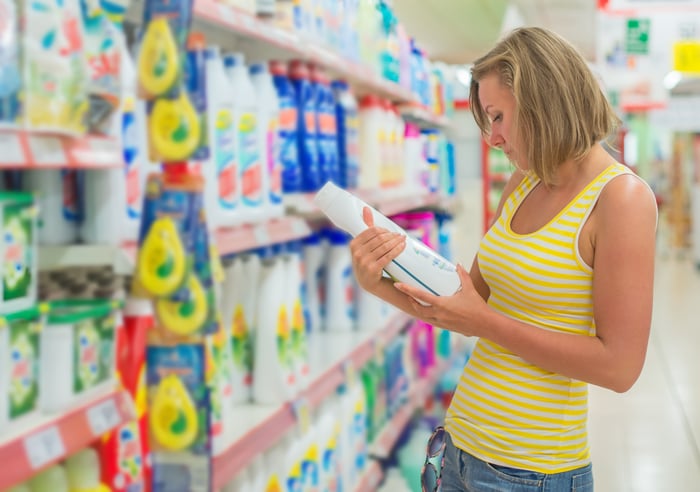 Procter & Gamble (NYSE:PG) owns some of the world's most recognizable consumer products brands, including Crest, Gillette, Pampers, Tide. With more than $65 billion in annual sales, it's one of the largest and most diversified companies in the market.

Because it's such a large, established business, investors shouldn't expect massive gains in revenue or earnings in the short term. However, the company's ongoing investments in long-term growth, its dividend history, and its overall stability make it a prime buy-and-hold candidate. Let's break down three reasons why you should consider it for your portfolio.

In 2014, P&G implemented a new strategy to drive growth by divesting itself of any sub-brands that were not helping the company to grow earnings. This streamlining strategy led it to sell off 100 brands and focus on the remaining 65, which accounted for 95% of the company's profits. Management stated that this would make P&G "a much simpler, much less complex company of leading brands that's easier to manage and operate."

So far, the strategy seems to be working: Sales for the fiscal year that ended June 30 dropped from $70 billion to $65 billion as some brands were discontinued, but net income increased 50% year over year. P&G management has said that they plan for another $10 billion in cost cuts over the next five years as they focus more on the highest-performing segments, which should help to drive even more earnings growth for years to come.

Some of the many well-known brands under the P&G umbrella. Image source: Procter & Gamble

Another reason to have P&G as part of your long term portfolio is the company's proven track record of dividend growth. P&G has raised its payout consistently in each of the last 60 years, and most recently did so again in April, boosting it to $2.68 annually -- a more than 3% yield at current share prices. The following chart shows the quarterly payout over the last few decades. 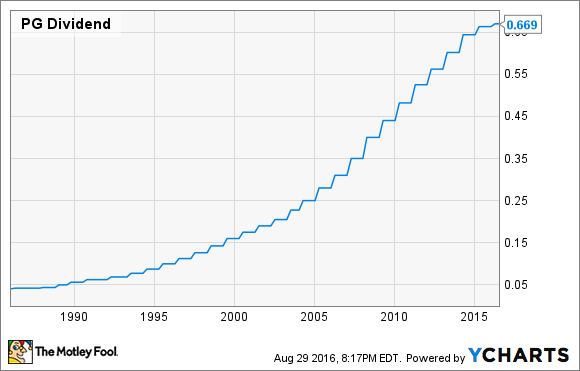 Because its success with its new streamlining strategy has helped to cut costs without affecting earnings, it's likely that P&G's pattern of dividend payout growth will continue in the years to come.

3. Stability even during market corrections

With earnings likely to continue growing, and a clear track record of dividend growth, the final reason to add this stock to your portfolio is the safety it offers during bear markets. Downturns are not an "if," but a "when." While those drops tend to affect most companies, some are better able to weather the storms than others.

Many of P&G's products are non-cyclical, such as diapers and soap, and consumers will continue purchasing them consistently even in a recession. P&G stock held relatively steady through market turmoil in 2000 and again in 2008 -- both examples of market corrections when the stock lost some ground, but effectively regained shortly thereafter. 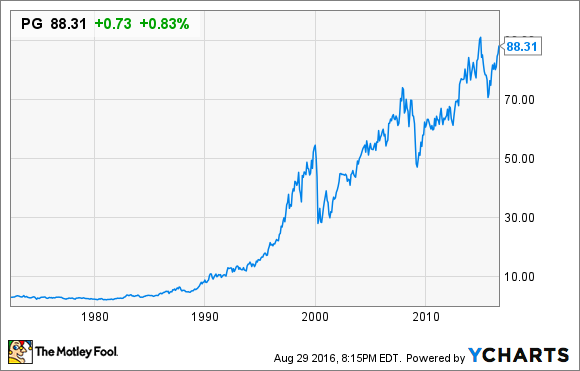 P&G has been around for more than 100 years, and has accumulated a market cap over $235 billion. As such, you wouldn't expect it to be a high-growth company anymore. What you can expect is that it will grow earnings steadily in the coming years, continue increasing its dividend, and stay relatively stable in the certain event of a market correction.

The shares are not exactly cheap, trading at around 23 times earnings following the stock's 25% rise over the last year. Yet trying to time the market is usually a fool's game (lowercase "f"). For investors seeking well-performing companies with proven strategies for growth, P&G looks like a great addition to a long-term focused portfolio.