Shopify (NYSE:SHOP) investors have had plenty of reasons to cheer since its IPO in May 2015. Shares are up over 58% in just 15 months, albeit with a heavy dose of volatility. 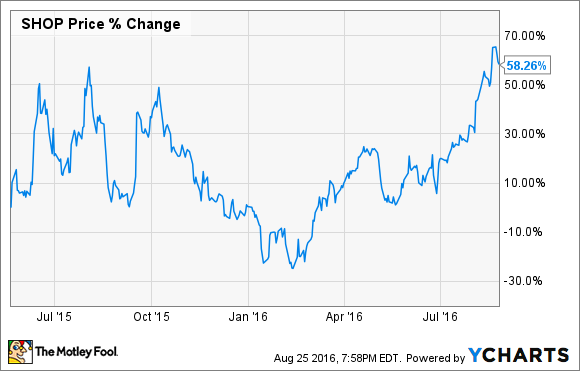 Shopify's main focus is on small and medium businesses, which it charges anywhere between $9 and $299 per month. With rapid growth and demand for e-commerce, it's not surprising that Shopify isn't the only game in town. Companies like Demandware, Bigcommerce, and Magento are a few of the providers that offer similar solutions. However, Shopify has proven itself to be the cream of the crop

In its most recent quarter, year-over-year total revenue and gross merchandising value grew 93% and 106%, respectively. The Shopify platform has processed over $20 billion in sales through 300,000 stores.

While its tremendous growth and early success as a publicly traded company have helped fatten the pockets of early investors, those waiting on the sideline may feel that they have missed out on the growth. Trading at 12.5 times sales, the stock is not cheap. However, there are still reasons to believe the future is as bright for Shopify as its past. Let's take a closer look at three of them.

Tobias Luetke isn't exactly a household name like Steve Jobs, Jeff Bezos, or Mark Zuckerberg. Yet much like the popular founders who continued to lead their companies, he's proving himself to be an ambitious, customer-focused leader.

According to his Wikipedia page, Tobias Luetke began rewriting code of the games he played at the age of 11 or 12. Instead of going to college, Luetke attended a German apprenticeship aimed at producing computer programmers. By his mid-20s, he had decided to sell high-end snowboards online, which is where he found a need for a better e-commerce platform.

It is often difficult for computer geeks to make the transition to business leaders, but Luetke appears to be doing just that. Trevor Oelschig, a venture capitalist for Silicon Valley Partners, spoke very highly of Luetke:

Tobi had built a culture, a product, and had a vision that rivaled anything that could be found 2,500 miles away in Silicon Valley. (Spotify is headquartered in Ottawa, Ontario)

Venture capitalists aren't the only ones singing Luetke's praises. Daniel Weinand, a friend and partner, said, "it feels like he is going a few years into the future and is coming back with positive information and sharing it with us."

According to Glassdoor employer reviews, 88% of current and former Shopify employees would recommend the company to their friends, and 94% approve of Tobias Luetke. So although Luetke isn't in the same league as Zuckerberg and Bezos, investors should feel good about a talented founder-leader at the helm.

A study by Harvard Business Review found that returns to shareholders of companies that are currently led by their founders are three times higher than those of other companies. At only 35 years old, Luetke has plenty of time to continue to lead his company to higher levels.

In 2010, Amazon.com (NASDAQ:AMZN) launched Webstore, a platform that allowed SMB retailers to create their own custom e-stores to help them sell on Amazon. Just six years later, it will be shutting down and using Shopify as its partner for third-party merchants. The move was a huge validation that Shopify offers a superior product.

Amazon isn't the only large internet player partnering with Shopify to take advantage of the enormous e-commerce opportunity. Shopify is also the platform behind the "Buy" button on Facebook, Twitter, and Pinterest. Merchants can now also utilize Facebook Messenger to communicate with its customers.

Furthermore, last May, Shopify revealed that developers can start building sales channels for popular apps and sites, Ebates, Houzz, and Wanelo. To reduce the friction of repeatedly entering credit card and shipping information, Shopify announced that Apple Pay and Android Pay will be available on all Shopify stores this fall.

Expanding its partner program is a key component of Shopify's growth strategy. Its recent moves make it easier for merchants and shoppers to have a seamless, well-integrated shopping experience -- which, of course, leads to higher retention rates and the expansion of Shopify's overall merchant base.

As mentioned earlier, Shopify does not appear cheap. However, with a market capitalization of $3.5 billion and trailing 12-month revenue of just under $300 million, the company has plenty of room to run. According to Gartner, worldwide spending on digital commerce platforms is expected to grow at over 14% annually, reaching $8.544 billion by 2020. Shopify estimates its global total addressable market at $46 billion. I'm usually wary of company estimates of its addressable markets, but with 2016 global online sales estimated at $1.9 trillion, Shopify's figures don't appear to be far-fetched.

Salesforce.com saw the enormous opportunity in digital commerce platforms when it spent $2.8 billion to acquire Demandware, a previously publicly traded Shopify competitor. Shopify is currently trading at a 25% premium to Salesforce's acquisition price, but its business performance relative to Demandware shows that it may still be a bargain

In its final quarter reporting quarterly results, Demandware expected 2016 revenue of $308 million and gross merchandising value (GMV) growth of 19%. Shopify expects to finish 2016 with $367 million in revenue, and grew GMV an astounding 106% in its latest quarter.

Like many technology companies in the early stages of high growth, Shopify is not yet profitable. Therefore, investors can expect a lot of gut-wrenching gyrations in the stock price -- much like they've seen over the past 15 months. Shopify stock isn't for everyone, but long-term investors should have a lot to look forward to if they're willing to ride out the volatility.