Oil and gas is a cyclical business that can wreak havoc on a company's income statement. Just look at the past two years to see what kind of damage can be done. The issue for investors is that it's impossible to time the market just right. For anyone looking to invest in this industry, the key is to find well-run companies with great management teams and ride them through the ups and downs of the industry.

So we asked three of our energy contributors to each highlight a company they see as having a great management team that has steered its respective company through the thick and thin of the industry. Here's what they had to say.

Jason Hall: Phillips 66 (NYSE:PSX) is one of my favorite companies in the oil and gas industry, largely because CEO Greg Garland has done an admirable job running the company -- and allocating capital wisely -- since it was spun out of ConocoPhillips in 2012.

Phillips 66 is known for its refining and marketing business, which produces the lion's share of the company's cash flow and profits. But at the same time, the growth prospects in refining are minimal, and can eat up huge amounts of capital while taking a very long time to pay off.

But the refining business also gives the company a big advantage over its integrated and producer peers. They have felt the brunt of low oil and gas prices on their bottom lines, while Phillips 66 has continued to generate big cash flows. And it's how Garland and team treat those cash flows -- and what they don't do with them -- that emphasizes how well-run the company is.

Garland has so far allocated capital to growth projects in the midstream and petrochemicals space, expanding the company's own capacity instead of making splashy acquisitions that often don't generate the promised returns. By staying focused on internal growth, the company avoids a lot of the pitfalls that come with big acquisitions. Management has also steadily increased the dividend (though well within sustainable levels) and aggressively repurchased shares with excess cash.

Historically speaking, this kind of strategy often yields the best returns for investors. If Garland and team continue running Phillips 66 in this manner, the odds seem good that history will repeat itself.

This company has seen it before, and will be around to see it again

Tyler Crowe: A key characteristic you want to look for in a well-run company in the oil and gas industry is the capability to handle the cyclical nature of the business. As much as companies want to control their own destiny, it is an industry of price takers, where even small changes of supply and demand can radically change the price of oil and gas, or even service and equipment, contracts. To handle these ups and downs, you need to be prepared as a company to handle a downturn at any given moment, and National Oilwell Varco (NYSE:NOV) is one of the best in the industry at managing its business throughout the cycle.

National Oilwell Varco's bread and butter is the sales of rig equipment, and the company has generated a considerable market share: More than 80% of drilling-related equipment on an offshore rig today is National Oilwell Varco-branded equipment. This means that the company has a pretty large customer base for replacement and disposable parts. This comes in handy considering that its aftermarket rig part business segment has the highest margins within the company. While overall demand for equipment and services is very weak today, having segments that generate some recurring revenue has helped keep the company going in this tough time.

It also helps that, unlike so many other companies in this business, National Oilwell Varco's management team has kept a pretty conservative balance sheet. With $1.6 billion in cash still on the books and total debt load of $3.2 billion -- 15% of total capital for the company -- there is plenty of cushion to help get it through the tough times. It's things like this that have allowed the company to be around for more than a century.

Shares of National Oilwell Varco haven't performed well over the past couple of years, but that is more a product of the broader market than a reflection of management's handling of the situation. If you want to put your investment dollars in the good hands of an oil and gas company, you'll be hard-pressed to find one better than National Oilwell Varco.

Reuben Gregg Brewer: When it comes to oil and gas, there's one business that you simply can't do without: midstream. That's the name for the network of pipes and storage that gets fuels from where they are brought out of the ground to where they are eventually processed and used. Midstream companies like giant Enterprise Products Partners (NYSE:EPD) tend to get paid for the volume that goes through their system -- like a toll booth. So low oil and gas prices aren't as big a deal to Enterprise, which currently gets over 90% of its gross operating margin from fee-based businesses (up from around 70% in 2011).

But the midstream label can give investors a false sense of security. For example, Kinder Morgan is a midstream giant, but it had to cut its dividend in 2015 so it could self-fund its growth at a time when capital markets were leery of the oil and gas sectors. Enterprise, on the other hand, has increased its distribution each quarter for 48 consecutive quarters -- right through the oil downturn. It's managed such an impressive feat because it's conservative. Perhaps the best example of this is its coverage ratio, which through the first half of this year was around 1.3. There's plenty of room for adversity before the company's distribution is at risk. 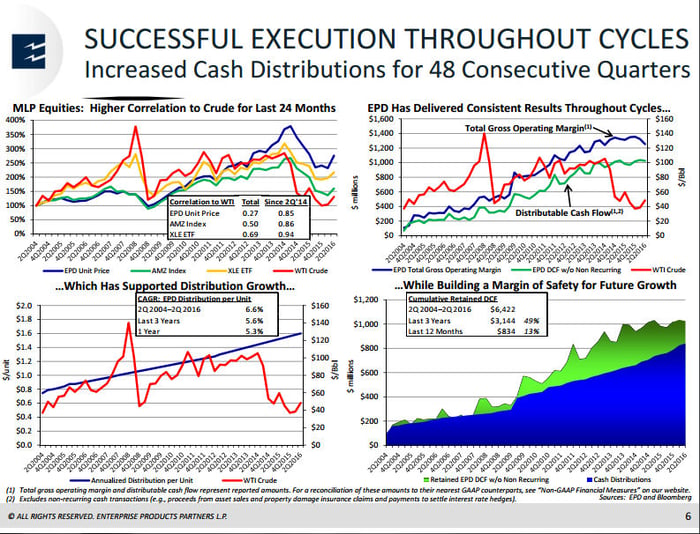 Meanwhile, with an investment-grade credit rating, a conservative financial culture, and a successful history of bringing new projects to market ($35 billion worth since its 1998 IPO), Enterprise hasn't had any problems funding its growth. It has around $5.6 billion worth of additional growth projects underway right now, too, which should help keep that impressive dividend streak alive.

No company is immune to risk, but Enterprise has proven it can handle difficult markets better than some of its largest competitors. The distribution is just one impressive example of that. If you are looking for an oil and gas play that's a bit different from the norm, you might find that Enterprise Products Partners has a place in your portfolio.