Magellan's stock has been stuck in a rut for a while, but there are three big reasons to think shares will be headed higher.

Investors in Magellan Midstream Partners (MMP 0.52%) have to be shaking their heads right now. Even though the company has continued to produce solid results over the past year, the stock has gone absolutely nowhere.

As discouraging as this has been, however, there is good reason to believe this malaise won't last much longer. Here are three reasons why investors should be confident that the company's stock will rise. 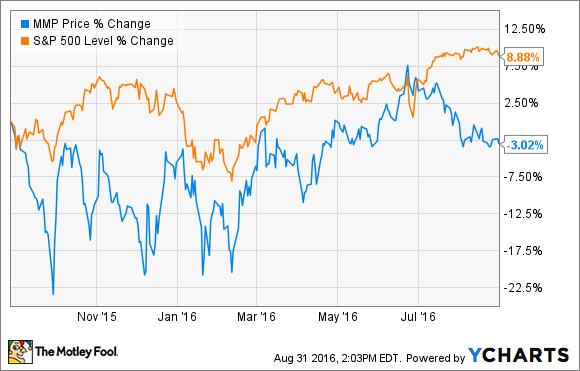 One of the things about Magellan Midstream's results on a quarterly basis is incredibly predictable. More than 85% of the company's revenue comes from long-term take-or-pay contracts that are set at a fixed fee no matter the price of the oil or refined products that move through its pipelines or storage terminals. The benefit for investors is that investors need not worry about watching revenue fall off a cliff when commodity prices drop, but also means that there is little upside from rising prices, either.

The only way that the company can increase its profits and cash flows is to add pipes, tanks, or other midstream assets to the system. Luckily for its investors, Magellan is in the completion phase of several large projects that are slated to significantly bring more cash in the door each quarter. While there isn't one single project that stands out as the project to watch, its three largest projects -- the Little Rock refined product pipeline extension, the Saddlehorn crude oil pipeline, and the Corpus Christi condensate splitter -- are all investments greater than $200 million that are expected to become operational by the end of 2016 and should be major contributors to distributable cash flow growth.

The real big project to watch in the future, though, is Magellan's Pasadena marine storage and export terminal in Texas. The first phase of the project is expected to cost $335 million, but the company has bigger plans to spend a total of $1 billion in developing this asset. It will likely take several years to develop and come on line in several phases, but this is a real needle mover for the company long term.

For many years, Magellan has mostly balanced its growth between organic investment and strategic acquisitions. Over the past few years, though, there has been a larger shift toward organic investment. If you step back and take a look at the oil and gas industry over the past several years, this does make a bit of sense. Thanks to the development of shale resources, there was an immense appetite for new energy infrastructure, and any existing infrastructure was selling at a huge premium.

Now that the shale boom has cooled off and production levels are slightly declining, that dynamic is starting to shift back to the point where it may be more cost effective to make an acquisition. According to Magellan CEO Michael Mears. acquisitions are definitely on the company's radar today. Here's what Mears had to say on the most recent conference call:

Concerning the acquisition market, there are a number of attractive assets currently being marketed. As always, we remain active in analyzing these opportunities, and we'll do our best to negotiate offers we believe are reasonable and will benefit Magellan investors over the long term.

Wall Street can be fickle sometimes when companies add assets via acquisition depending on the asset and the price paid, but Magellan's management does have a reputation as being ones that only make acquisitions that generate high rates of return and are just "accretive" that so many other companies claim.

Giving more cash back to shareholders

Adding new assets and increasing profitability will always be a welcome sight for investors, but what they all really care about is putting more cash in their wallets. So the fastest way for Magellan's stock to rise is to increase the company's payout. After the company raised guidance earlier this year, the company was able to announce that it's distribution growth for the next couple of years will be strong. Here's Mears again from the conference call:

[W]e reaffirm our $910 million annual DCF guidance for 2016 and remain committed to our goal of increasing cash distributions by 10% in 2016 and at least 8% in 2017, all while maintaining distribution coverage of 1.2x.

Magellan has been able to raise its distribution every quarter since it IPOd back in 2001, and those distribution growth projections should do something to its stock price.

Predicting what a stock will do over the short term is impossible. By most accounts, Magellan's stock should have risen as the company continues to produce solid earnings results despite the tough market for oil and gas companies. That hasn't been the case so far.

Eventually, though, the fundamentals of Magellan's will start to have a greater impact on the bottom line. Increased assets bringing new cash in the door, a couple of smart acquisitions while the market is still weak, and maintaining consistent dividend increases should be more than enough to push Magellan's stock higher over time.

Tyler Crowe owns shares of Magellan Midstream Partners. You can follow him at Fool.com or on Twitter @TylerCroweFool.