HiMax Technologies (NASDAQ:HIMX)has popped about 24% this year on a solid quarterly revenue growth and future prospects for emerging technologies like augmented reality. But if investors pan out and look at the broader picture they'll see the company suffering from slowing tablet and smartphone markets and a volatile stock price over the past three years.

For investors wondering whether to park their money in HiMax (or take their current gains and head elsewhere) here are three charts showing the company's current revenue instability, one potential area for growth, and the overall volatility of HiMax Technologies' stock.

The company's small and medium driver business saw the least amount of growth, at just 9%. Though not bad, it's not exactly reassuring that the company's most important revenue segment, which accounts for 45% total revenue, is growing the slowest.

Here's a look at HiMax's revenue instability over the past few years: 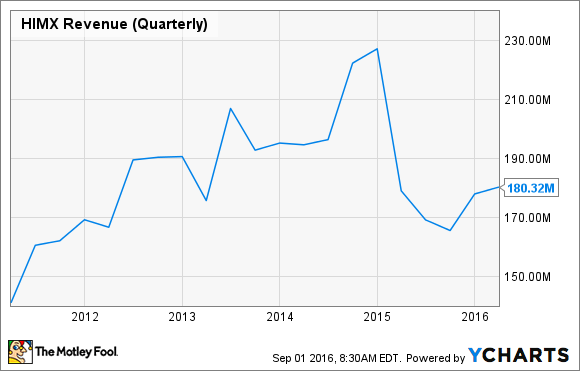 The previous revenue run-up through 2015 was offset this year by falling demand for small and medium display panel components for smartphones and tablets.

As those two markets have slowed down they've weighed on HiMax's biggest revenues and profits. With increased competition in the space, it's doubtful we'll see the company's revenues return to those highs any time soon.

HiMax President and CEO Jordan Wu said on the latest earnings call that he expects augmented reality (AR) to take off, particularly after the release of Pokemon Go.

Wu said his company is in a unique position to benefit because it already works with 30 customers in the AR industry and has been working on AR-related technologies for the past 15 years.

His optimism could certainly pan out for HiMax. Here's how much the mobile AR installed base is expected to grow over the next few years: 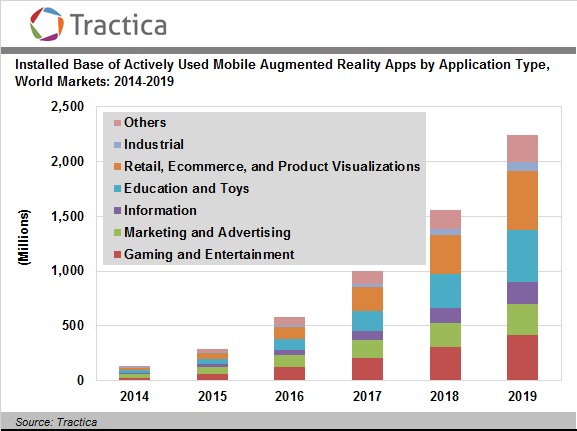 Wu noted that HiMax is the "provider of choice" for microdisplay and related optics for AR technology. That should help increase sales of the company's LCOS and WLO technologies as soon as the second half of this year, and "...is just the beginning of a very long-term growth story," according to Wu.

While tracking a company's stock price isn't an effective way to pick a stock by itself, it can be a good indicator of what investors should expect if they invest in a company. And in the case of HiMax Technologies, investors can expect a hefty dose of volatility.

Here's what HiMax's stock price has looked like over the past three years: 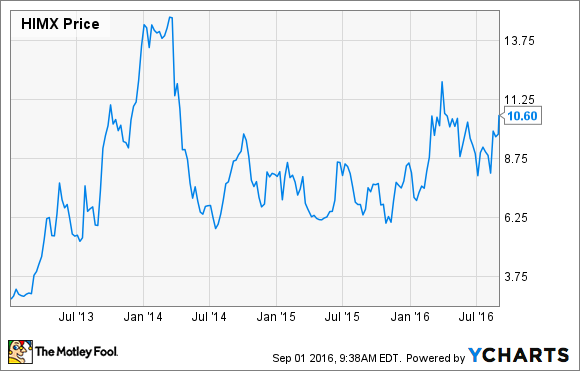 It's unlikely that the near-term future of HiMax will look much different than the chart above. The company is still highly dependent on its small and medium sized display drivers, even as new business from augmented and virtual reality grows.

As tablet and smartphone growth continues to slow HiMax will have to continue investing in new technologies to build out new growth. That's good, but it means it could take a long time for the company to enjoy the same profitability it had years ago.

Investors have already pushed up HiMax's stock price more than 24% this year on some of the company's positive news. That makes me think that HiMax's legitimate stock price increase has already occurred and anything after this might be unwarranted. HiMax trades at about 24 times its earnings right now, which is around the tech industry average of less than 25. That being said with much of the current price spike stemming from potential markets like AR as opposed to concrete revenues -- I'd be very comfortable staying away from HiMax's stock right now.