Please ensure Javascript is enabled for purposes of website accessibility
Log In Help Join The Motley Fool
Free Article Join Over 1 Million Premium Members And Get More In-Depth Stock Guidance and Research
By Chuck Saletta - Sep 1, 2016 at 9:05AM

Pipeline giant Kinder Morgan roiled investors over the last year as it slashed its dividend and cut its growth prospects, but those moves helped Kinder Morgan better position itself for the future. 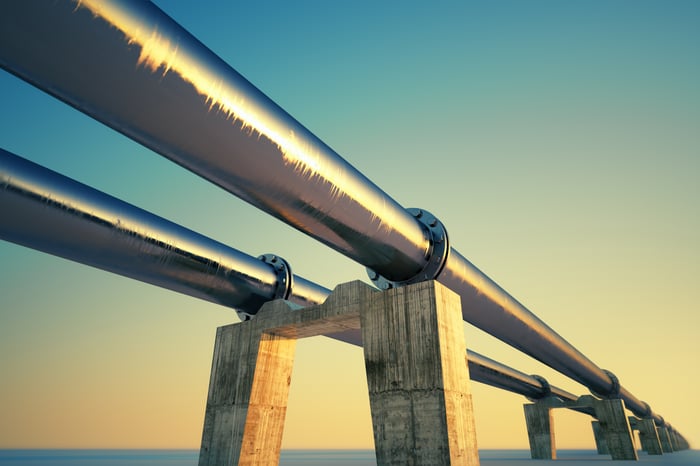 Shares of pipeline giant Kinder Morgan (KMI 1.45%) are up nearly 50% so far this year, but they're still down around a third of their value from their 52-week high. That earlier crash was driven by a Moody's warning of a potential debt downgrade, which led to Kinder Morgan slashing its dividend.

The subsequent rebound came as Kinder Morgan showed the market that it really could cover its costs and fund its key expansion projects without abusing the debt market. The past is the past, and the key question facing Kinder Morgan's investors today is: What version of the company will we see in the future? The one with a proven track record of rewarding shareholders with increasing dividends as it grows, or the one that had to slash those rewards to keep its investment grade debt rating?

The Sept. 2015 quarter was the last prior to Moody's warning of a potential debt downgrade. Last September, Kinder Morgan sported about $44.6 billion in debt. As of June 2016, it had dropped by around $1 billion, to around $43.6 billion. That debt reduction is a product  of Kinder Morgan's willingness to sell expensive assets to bolster its balance sheet as well as the fact that its business does generate billions of operating cash each year.

Speaking of that cash flow, Kinder Morgan generated nearly $1.3 billion in operating cash flow last quarter, on top of more than $1 billion the quarter just before that. And despite the divestitures, it's still investing hundreds of millions of dollars in capital expenditures to maintain and build its core infrastructure. That's the sign of a company that's doing what it takes to protect its long-term future, even as it works through a short-term potential problem driven by its financial condition.

While Kinder Morgan's adjustments to be more prudent with debt is helping it with Moody's, which now views Kinder Morgan's debt rating as stable, it is limiting the pipeline giant's growth prospects. Its project backlog is down, which represents a decline in its potential future expansion. For investors, slower growth translates directly to a lower valuation for the company, which largely explains why the stock remains so far off its previous highs, despite the recovery from its recent lows.

As Kinder Morgan improves its balance sheet strength and regains its trust with the ratings agencies, it may once again have the ability to issue new, incremental debt to fund its expansion plans. Alternatively, as it sheds underperforming assets and invests the sales proceeds in pipelines with higher potential returns, it might be able to more rapidly improve its cash flow to self-fund its expansion faster. Either option provides a potential path forward to a restored, higher valuation estimate.

So, just how risky is Kinder Morgan?

The good news is that, thanks to its newfound austerity, Kinder Morgan is less risky than it was this time last year. Despite fairly low natural gas prices, it can still self-fund its base operations and make billions in operating cash flow without tapping the credit market. This on its own showcases how Kinder Morgan remains a reliable "toll booth" operator in energy transportation.

In addition, while Kinder Morgan does still have debt on its balance sheet, its current debt-to-equity ratio is below 1.3. That's a fairly reasonable debt load even for a company that isn't in a very capital-intensive business. For a company like Kinder Morgan that has to shoulder the costs of building and operating thousands of miles of infrastructure, that debt level shouldn't be cause for concern at all.

Also, Kinder Morgan's decision to slash its dividend late last year means that it is able to internally direct more of those billions in operating cash flow that it generates. Between that healthier balance sheet and greater control of where its cash flow is going, Kinder Morgan has done a heck of a job lowering its risk. Unfortunately, that reduced risk did come with a lower potential growth rate, which is why its shares are below their year-ago highs.

Still, I remain a shareholder of Kinder Morgan, and if its shares continue to be available for below my $22 fair value estimate, I might even be willing to buy more. As it regains its footing, I'm looking forward to the day when it can resume increasing its dividend and sharing more of its operational strength with its shareholders.

Chuck Saletta owns shares of Kinder Morgan and has the following open options position in it: synthetic long Jan 2018 $17.50 and short strangle Jan 2017 $20/$24. The Motley Fool owns shares of and recommends Kinder Morgan. Try any of our Foolish newsletter services free for 30 days. We Fools may not all hold the same opinions, but we all believe that considering a diverse range of insights makes us better investors. The Motley Fool has a disclosure policy.