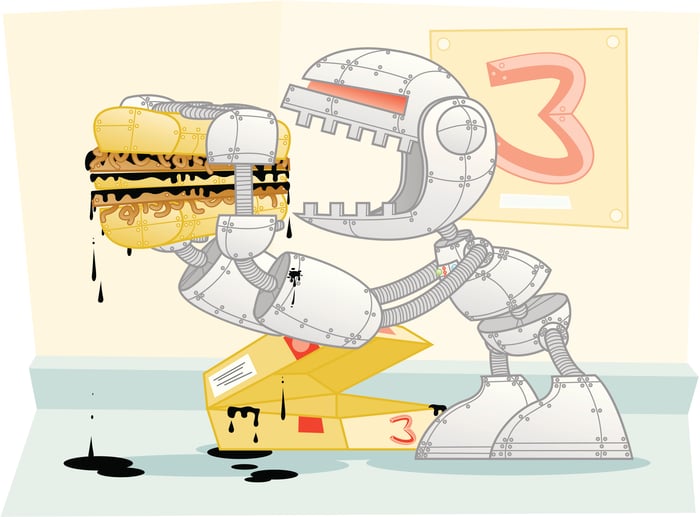 The robots in movies and science fiction books that rise up to take over the world generally are able to do so because we have placed them in charge of missiles, defense systems, and other military technology.

We never see a disgruntled, order-taking bot working at McDonald's (NYSE:MCD) or Domino's (NYSE:DPZ) cast off its virtual hairnet to gain sentience and overthrow its fast-food overlord. But fast food, along with shipping warehouses, has become a hotbed for robots and other automated technology.

McDonald's has been testing ordering kiosks, Domino's has numerous ways to place an order that do not involve talking with a human being, and Starbucks (NASDAQ:SBUX) has used technology to shift employees away from order taking to put them into production. It may not be a fantastic utopia where Rosie from The Jetsons does our laundry, but robot/automated technology has clearly infiltrated fast food.

It's not a question of whether automation will come; it's one of whether it will make stores more efficient or allow them to get rid of human workers. Starbucks, for example, has used automation to allow it to move workers into making drinks rather than taking orders, but it has not yet cut its workforce in any meaningful way.

CollegeRecruiter.com's Steven Rothberg, whose company works to find jobs for students and college graduates, believes that fast-food robots are coming, but he does not think they will supplant traditional workers. 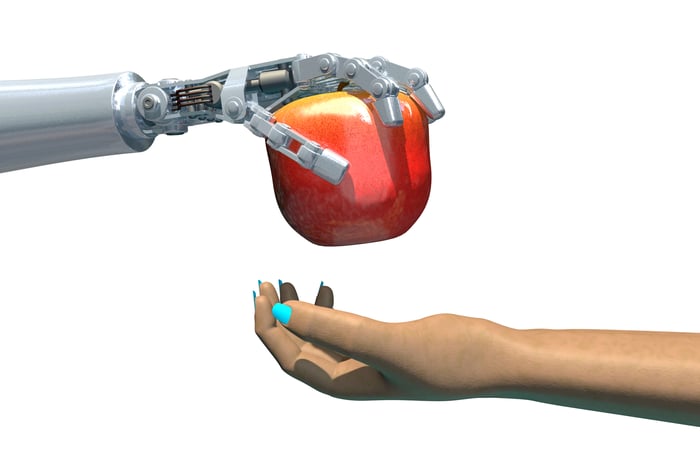 Timothy Carone a teaching professor in the Department of IT, Analytics, and Operations at the University of Notre Dame's Mendoza College of Business, believes that automation will happen in restaurants, but not quickly or necessarily to the detriment of flesh-and-blood workers. The professor, who wrote the forthcoming book Future Automation -- Changes to Lives and to Businesses, does believe that the path toward robot workers (or at least automated workflow) will be a slow one.

"Automated services in restaurants has started and will continue for many years even while many restaurants maintain their level of manual service," he wrote in an email to The Motley Fool. "Some fast food companies will be all-in and others are taking a wait-and-see attitude. It will take years for fast food franchises to recognize a return on their automation investment though at some point an automated operation will be much cheaper than a manual operation."

Carone said that the idea that restaurants are automating due to labor costs is only partially true.

"Automation would occur at much lower labor costs than exist today or in the future but automation costs money," he said, noting that the expense will lower over time. "Whether a restaurant becomes partially or fully automated should depend on its customers and locations. Fast-food franchises located anywhere are finding its customers value automation. Restaurants at airports or similar locations that provide a captive audience but no loyalty except for brand loyalty will find automation necessary and valued by customers -- faster is better."

Donald Mazzela, a board member of the non-profit National Robotics Education Foundation, said his group has been looking at the issue of robots in restaurants for three years, noting that robotic interaction is being taught in culinary and hospitality courses throughout the world.

"In our latest study, we estimate average fast food establishment will switch 1.2 workers from counter service to other tasks as remote order taking, delivery by robotic applications grow," he wrote.

He expects the tipping point will be by 2020 and pointed out that ATMs have lessened the needed for bank tellers. The industry, he explained, needs time to educate customers, but that will happen, he said, because the benefits are simply too strong. He cited machines counting change, sensors, and other tools making inventory more precise and the ability to relay orders directly to the prep area as a way to decrease waste. 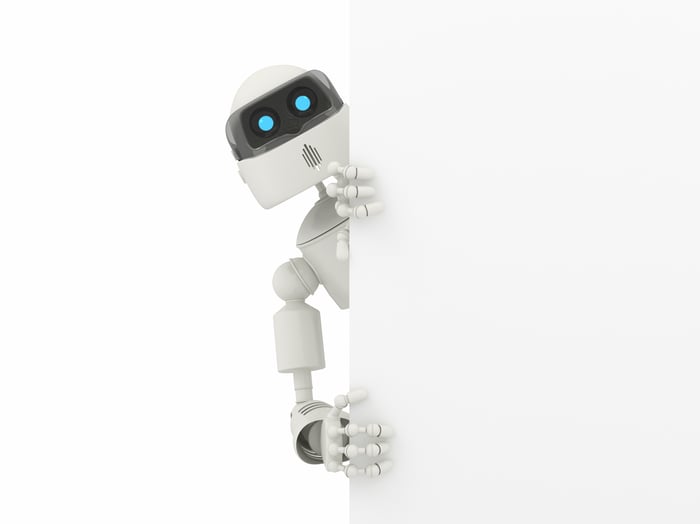 A change is coming and Fred Goff, CEO of Jobcase, a social media platform helping workers without college degrees find meaningful jobs, believes workers should embrace it. He told The Motley Fool that robots will perform some jobs typically done by humans, but that will also create opportunity for flesh-and-blood workers.

"Concerns about technology displacing jobs has been a constant Luddite theme throughout the Information Revolution, and in fact since the Industrial Revolution," he wrote. Goff explained in his email that in a broad sense technology tends to create more opportunity than it displaces.

"It is not to be feared, but it must be managed," he wrote. "The challenge -- and opportunity -- for workers is for people to take control of their own work-life and navigate the positive impacts (easier access to education/training, new job creation, etc.) so that they aren't overwhelmed by the negative impacts of technological progress. Keep open to change and keep moving forward."

What does this mean for business?

Robots or automated workers come with benefits -- they don't show up late, don't steal, and never ask for raises -- but they also have a downside. So far, companies like Starbucks have balanced automating with maintaining a human touch. A robot/app may take your order, but a person makes it and hands it to you.

As that balance is lost and human interaction disappears, chains need to be worried about losing a personal connection with their customers, which could remove a reason people come back. This technology is inevitable, but it does not necessarily mean soulless eateries staffed by automatons.