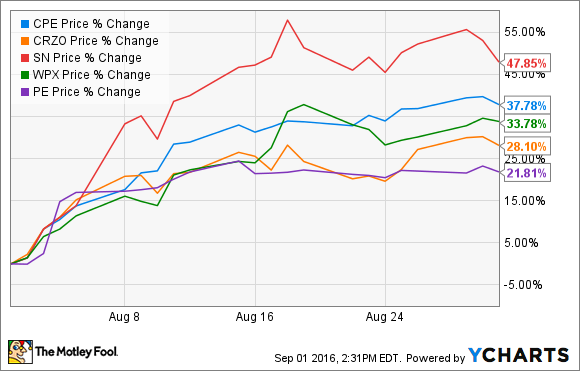 That said, crude was not the only catalyst driving these five oil stocks higher last month.

Sanchez Energy led the charge last month initially due to its excellent second-quarter production results. During the quarter its production averaged 55,900 barrels of oil equivalent per day (BOE/d), which exceeded the high-end of the company's guidance range by over 7%. Driving that result were the continued strong results of the company's South-Central Catarina wells. Because of those strong results, as well as the company's improved liquidity, Sanchez Energy boosted its capex budget by $50 million. Further, according to reports, its liquidity could be getting another boost, with the company reportedly looking for buyers for some of its Eagle Ford assets.

Callon Petroleum also reported strong second-quarter production results, which were up 8% sequentially. Likewise, it boosted its capex budget, adding $40 million in capital to start running another rig. Further, the company closed two transactions during the quarter for a total of $362.6 million while signing a purchase agreement to boost its working interest in its Casselman and Bohannon fields by 4%. These moves set Callon Petroleum up for robust growth in 2017.

WPX Energy's surge last month was also due to its second-quarter results, with its production up 34% year over year. Driving that growth was the company's Delaware Basin assets, which delivered 15% oil volume growth over just the prior quarter. WPX Energy also announced that it increased its acreage in that core basin to 100,000 after completing a bolt-on transaction. Further, with oil prices improving the company will resume completion activities in the Bakken shale formation, with a plan to complete three to four wells per month through the end of the year.

Strong second-quarter production was also the key driver of Carrizo Oil & Gas last month. The company reported that total production was up 15% year over year thanks to strong results from its Eagle Ford shale assets. Because of those strong results, the company boosted its full-year oil production growth target to 10%. Further, Carrizo Oil & Gas expanded its capex budget to put it in the position to deliver double-digit oil production growth next year, with it poised to deliver that result while spending within cash flow in a $55 oil environment.

Parsley Energy, likewise, reported excellent second-quarter production results. The Permian Basin driller's oil production was up 82% year over year and 25% from just last quarter. Like most of its peers on this list, the company boosted its full-year production guidance as a result of its strong performance thus far. Further, Parsley Energy has been very active in mergers and acquisitions. During the quarter it closed transactions consisting of 14,200 acres in the Southern Delaware Basin and 8,700 acres in the Midland Basin while announcing another 30,000-acre acquisition in the Southern Delaware Basin and an 11,672-acre Midland Basin deal after the quarter's end.

The oil market might be in the doldrums, but that is not stopping these five shale drillers from driving robust production growth. That is because all have prime positions in the core of America's best shale plays, enabling them to earn compelling drilling returns at today's prices. All five remain very bullish on growth going forward, which is why each is boosting investment spending to either add more rigs or acquire additional acreage to drive growth in the years ahead.