Best Buy (NYSE:BBY) reported earnings last week and the stock surged on the surprise positive results. What happened during the quarter, and is the exuberance warranted?

Best Buy reported an earnings per share increase of 22% over the same period last year. The big news was that online sales grew 23.7%, a large increase on top of similar numbers the previous quarter.

The e-sales figures were a good sign, but that's not what drove the stock higher in the last week. Profits were higher, not because of an uptick in sales, but because the company reduced selling and administrative expenses by $38 million, recorded gains from discontinued operations, and recorded other one-time items not directly related to sales.

Business was also helped by better than expected performance in the Canadian and Mexican stores. Although revenue was down 1%, expenses decreased for the segment after Best Buy closed down locations last year, especially in Canada. As part of the restructuring, Best Buy ended up having a smaller tax bill than last year's comparable period, down $97 million from $108 million. 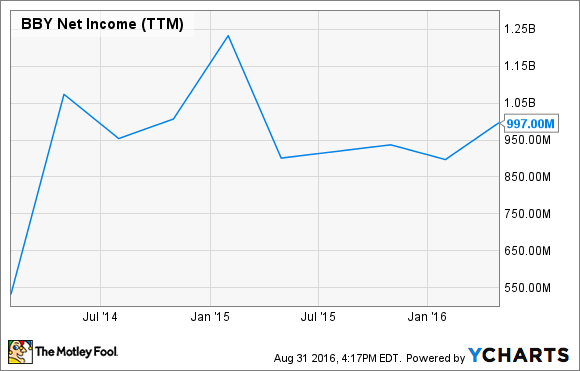 The profit gain was a pleasant surprise for shareholders, especially after the year-long slide during 2015. But is the higher profit sustainable?

The problem with Best Buy's business

Despite the robust growth online as well as the stabilizing of the international stores, year-over-year revenue is still flat. Outside of e-sales, underperforming physical store locations continue to get closed down. Thus, the online and physical stores offset each other, leaving Best Buy with a stagnant business overall.

The company is starting to see some success, though. Last year's online sales growth was 13.5%, not enough to prevent actual declines in overall revenue. As online sales have ramped up, those declines have now flattened. 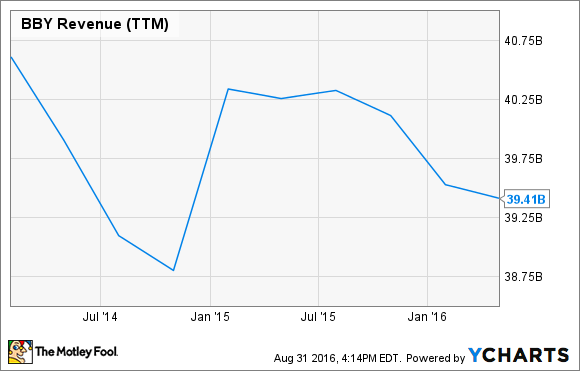 Best Buy launched a new mobile app and other online features last year to drive interest in its e-commerce capabilities. CEO Hubert Joly has said this year is one of "exploration and experimentation" as the company tests several new concepts to see what works.

Recently announced is an in-home advisor program in select markets, which involves a consultation with a technology advisor to help clients identify needs. Also in the works are in-store classes on topics spanning digital photography to home automation. Last year also saw the relaunch of the Geek Squad app, so Best Buy is leveraging that and offering on-demand services, including same-day service for those who need quick help.

After back-to-back quarters of 20%-plus online growth, comments during this most recent report seem to indicate a refocus on the traditional store format. Even though the retailer of all things technology got a much-needed reprieve last quarter, it seems that the business is still looking for the right recipe to grow both online sales and stop the bleeding at physical locations.

The way I see it, the pop in its share price in the last week is due to a few one-time gains for Best Buy and is not an indication of a lasting change in the business. It appears that not even strong online sales growth is enough to get things moving forward again for the company.

Profit growth through cost-cutting and closing of underperforming stores doesn't exactly inspire any confidence. Until there is some indication Best Buy has found a way to grow sales once again, I'm not interested in the stock.