Most investors need to wait a decade for a stock they own to double in value. However, investors who took a flier on silver mining stocks at the beginning of this year achieved that in a matter of months. In fact, those who bought Hecla Mining (HL 2.20%), First Majestic Silver (AG 2.37%), or Coeur Mining (CDE) at the beginning of this year have seen their investment go up more than 200% in just eight months: 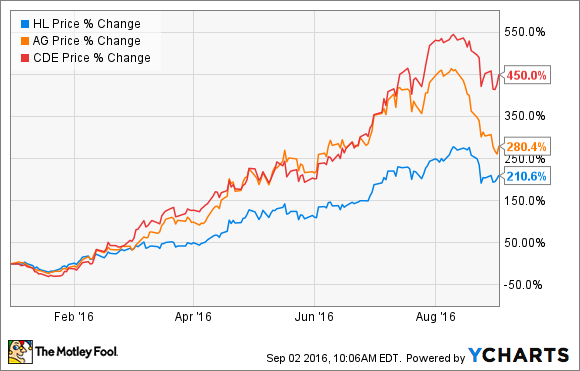 While the primary driver of these massive gains is the more than 40% increase in the price of silver since the start of the year, that is only part of the story.

It may come as a surprise to some that silver is not up all that much over the past year. For example, during the second quarter, Hecla Mining's average realized silver price was $17.26 per ounce, which was just 6% higher than the $16.32 it realized in the prior-year's second quarter. That said, Hecla Mining's sales were up a remarkable 64% while cash provided by operating activities more than doubled. Driving these gains was the fact that Hecla Mining's silver production was up 71% while its cash costs were down 32%. It was that combination of higher volumes of lower-cost silver that's driving the company's remarkable earnings growth.

It was a similar story for First Majestic Silver. Its average realized silver price was $17.01 per ounce last quarter, which was relatively unchanged from the $16.99 per ounce it captured in the year-ago quarter. However, revenue jumped 22% while the company reversed its year-ago loss. Again, driving the company's results was an increase in production, which was up 23%, to go along with a 24% drop in costs.

Unsurprisingly, Coeur Mining's average silver price realization was not up all that much year over year, increasing by just 7.1%. However, it delivered a remarkable 258.8% surge in free cash flow due in part to 5.5% growth in silver equivalent ounces sold and a 10.4% decrease in costs per ounce of silver equivalent.

While these silver producers had a great first half, all three are in the position to deliver stronger results in the second half of the year even if silver does not budge. Hecla Mining, for example, recently increased its full-year production forecast from 41 million ounces of silver to 44 million. Even better, it pushed down its cost projection, with the company now anticipating that full-year cash costs will average $4.75 per ounce of silver, down from its prior estimate of $5.00 per ounce.

First Majestic, on the other hand, actually projects that its production will come in 11% below forecast due to lower production rates at two of its mines. That said, it plans to offset that shortfall by pushing costs lower, with its full-year cash costs projected to be 23% below its previous guidance.

Finally, while Coeur Mining is maintaining its production and cost guidance, the company announced two significant developments that set it up for stronger cash flow in 2016 and beyond. First, the company finally satisfied the minimum ounce obligation on the Franco-Nevada (FNV 0.65%) royalty at its Palmarejo mine. That triggers a shift in terms, which should drive a significant increase in that mine's cash flow. Further, the company used its growing cash flow and a recent equity issuance to repay a $99 million term loan. That not only cut debt by 20% but reduced its annual interest expense by $9 million.

Silver, having started the year with a surge, just got its price back to where it was a year ago. While that certainly helped producer profits, many helped themselves by pushing down costs and increasing production. Those two factors are the primary reason their profits are soaring and have the potential to continue driving profit growth even if silver takes a breather.