More often than not when energy stocks move, they all go in the same direction, which is largely due to their correlation to energy prices. This week, however, the movers were all over the map -- despite the fact that oil tallied its worst week since July, slumping roughly 7%.

Instead, this week's biggest stock-price movers in the energy sector had zero correlation to oil prices -- or to anything else, for that matter, as we'll learn by drilling into what drove the moves of these five stocks. 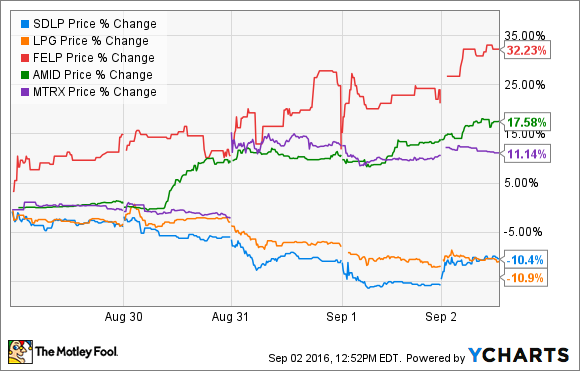 The coal-mining MLP Foresight Energy jumped this week after completing an out-of-court restructuring of more than $1.4 billion in debt. That was a big win for the company, especially after most of its peers failed in their out-of-court pursuits, and instead filed for bankruptcy protection. The move also won Foresight Energy a credit rating upgrade from Moody's, though the company still has a very speculative rating and could be downgraded again if its leverage metrics weaken.

American Midstream jumped this week despite a complete lack of news-driven catalysts. That said, there was a big block trade in the company, with 2.57 million units, or 15 times the normal volume, changing hands at $12 on Wednesday. This drove additional buying, sending units of American Midstream much higher on the week.

Energy-engineering company Matrix Service jumped after reporting solid results in its fiscal fourth quarter. While revenue was down 1.3% to $359.6 million, and earnings declined to $9.1 million, or $0.34 per share, both results exceeded analysts' expectations. Furthermore, Matrix Service put out strong guidance for 2017, driven both by several projects currently under construction and by the expectation of additional project awards by the end of this calendar year.

Meanwhile, offshore drilling MLP Seadrill Partners slipped, mainly due to continued fallout from its disappointing second-quarter report the prior week. Revenue slumped 5.7% over the previous quarter due to a day-rate reduction on one rig and the contract termination of another. Furthermore, Seadrill Partners noted that the offshore drilling industry remains "highly challenging." That is not giving investors much confidence that the company's results will improve anytime soon.

Finally, the decline this week of Dorian LPG, a liquefied petroleum gas (LPG) shipping company, was primarily due to the overall dour outlook for the shipping sector. This was something Dorian LPG noted in its fiscal first-quarter results about a month ago, saying that it was facing "an increasingly challenging freight market." While it was optimistic that LPG trade fundamentals would improve, the market is not buying that outlook until it sees tangible proof.

There wasn't any underlying trend driving this week's movers. Instead, the stocks of companies that reported good news went up, while those in industries with weak fundamentals sank.