Shares of footwear-maker Crocs (NASDAQ:CROX) tumbled in August, falling 24% according to data from S&P Global Market Intelligence. As you can see in the chart below, the sharp downturn came entirely on Aug. 3 after the company released its second quarter results. 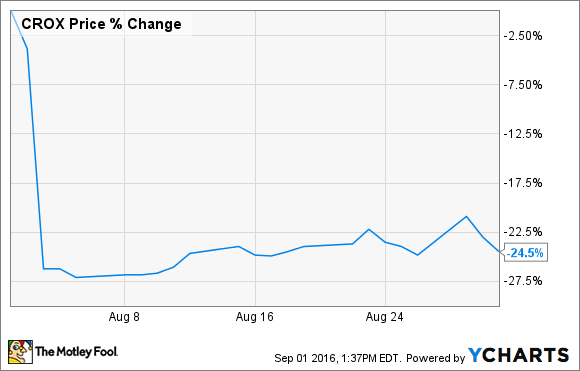 Crocs missed analyst estimates on both the top and bottom lines, posting per-share profit of $0.13 against expectations of $0.16, while revenue fell 6.3% to $323.8 million, well below the $347.8 million consensus. Profits actually went up $0.02 from $0.11 per share in the year-ago quarter as management cut back on SG&A expenses.

CEO Gregg Ribatt noted that the retail environment has been challenging as several other mall-based peers struggled as well.

Guidance for the current quarter was similarly discouraging as management sees revenue falling 7% to 11% to $245 to $255 million. For the full year, management projected a revenue decline in the low-single digits, citing a cautious retail environment and slower turnaround in China.

Since breaking through in the pre-recession era with its trademark plastic clog, Crocs has struggled to deliver consistent growth. The stock today is at its lowest point since 2010, and revenue has been flat or falling since 2013. With industry-wide challenges to tackle, this is one stock I'd stay away from.