From an investor's perspective, General Electric's (NYSE:GE) business is under heavy construction. The company is in the midst of exiting the traditional financial services business, which entails selling off about $200 billion in assets owned by its GE Capital subsidiary. At the same time, GE made its largest industrial acquisition in history, Alstom, which the company purchased for $10.1 billion in November and is currently in the process of integrating.

Consequently, there's a lot of noise showing up in GE's earnings statements, and it's making it difficult to assess the safety of its business and dividend.

To determine the sustainability of a dividend, investors often look at the business' underlying profitability and cash flow, which can be found on the income and cash flow statement, respectively. From there, the health of the company's balance sheet and longer-term business prospects are usually taken into account.

While determining the sustainability of a dividend is usually a fairly straightforward process, GE's financial statements are currently riddled with numerous one-time gains and losses that won't reoccur during the normal course of business. Instead of trying to adjust for these charges, which complicates matters, investors can start with management's 2016 outlook and operating framework:

During the first half of 2016, GE generated $0.71 per share in adjusted operating earnings and $10.7 billion in operating cash flow, while it paid out $4.5 billion in dividends and spent $14.3 billion buying back shares. On GE's second-quarter earnings call, CEO Jeff Immelt reaffirmed the company's outlook and said that GE remains on track to reach its operating cash flow goal for the year.

Using the low end of the range, investors can expect GE to generate an additional $20 billion in operating cash flow this year, and it has about $7.2 billion in combined dividend payments and buybacks remaining to reach $26 billion in capital returned to shareholders this year.

Year to date, GE has spent about $3.1 billion in capital expenditures -- money spent on expanding and upgrading its plants, property, and equipment. If GE spends about the same on capital expenditures during the second half as it did in the first half, GE will have about $16.9 billion in cash operating cash flow left over -- more than enough to cover the $7.2 billion it intends on returning to shareholders this year.

As part of its plan to exit the financial services industry outside of supporting its industrial businesses, GE applied to have its systemically important financial institution (SIFI) -- a regulatory designation that essentially considered GE Capital a "too big to fail" bank -- removed. GE's application was approved in June.

With GE Capital no longer considered a "too big to fail" bank in the eyes of regulators, GE's balance sheet is no longer subjected to stricter financial requirements than its industrial peers. In other words, GE now has greater flexibility in terms of how it allocates and sources capital, including taking on more debt.

At its annual outlook meeting in December, CEO Jeff Immelt implied that without SIFI, GE can be run "like a normal industrial and take on more leverage." Immelt introduced the idea of GE taking on $20 billion in additional debt. Excluding GE Capital, GE held $19.4 billion in short-term debt and $70.1 billion in long-term debt on its balance sheet at the end of the second quarter.

While adding $20 billion in new debt sounds like a huge burden, it pales in comparison to GE's massive asset base, meaning it only adds incremental leverage to GE's balance sheet and doesn't put the company out of line compared to its peers. 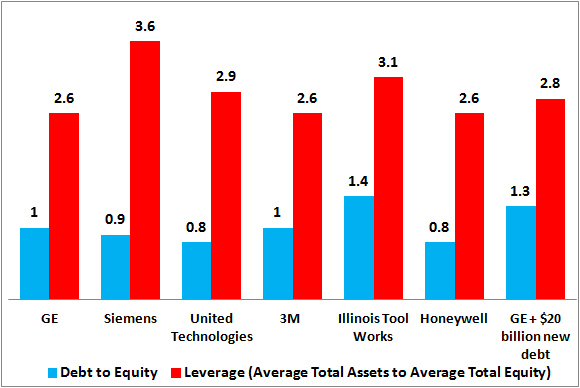 It's worth noting that credit rating specialist Moody's recently warned investors that if GE raises an additional $20 billion in debt, it may pressure the company's credit rating. In April 2015, the credit rating service downgraded GE's unsecured senior debt to A1 -- promptly after the company announced its plan to exit the financial services business. An A1 rating is considered to be upper-medium grade and is subject to low credit risk, but Moody's believes that GE's business is less diversified without GE Capital.

While it's true that GE isn't as diversified as it was with GE Capital intact, the company operates eight industrial segments across geographies and markets, and is currently pursuing several major avenues of new growth. Last quarter, this diversity helped mitigate the impact that weak energy markets have had on its oil and gas and transportation segments.

Of course, if the world experiences a major recession that leads to a fall in industrial production, it's likely to negatively affect GE's entire industrial business. However, the prospect of increasing GE's debt load isn't likely to put it at a major disadvantage to its industrial peers, all of which survived the financial crisis. Arguably, in another recession, GE won't have the added burden of operating a "too big to fail" bank, which may make it easier to navigate choppy waters.

Aside from the risk of a recession, which every industrial company faces, GE's business and dividend appear to be on solid footing.