Please ensure Javascript is enabled for purposes of website accessibility
Log In Help Join The Motley Fool
Free Article Join Over 1 Million Premium Members And Get More In-Depth Stock Guidance and Research
By Matthew DiLallo – Sep 6, 2016 at 11:00AM

The oil and gas company lost a boatload of money in its lower 48 segment this year because of low oil and gas prices.

The oil market downturn is having a dramatic impact on producer profitability. Operating regions that were once huge profit drivers for oil companies are turning into money pits. That is evident at oil giant ConocoPhillips (COP 0.06%), whose lower 48 business segment went from its crown jewel to a major weight on profitability.

Drilling down into ConocoPhillips' segments

As the chart below shows, several of ConocoPhillips' global operating segments are struggling under the weight of the oil market downturn: 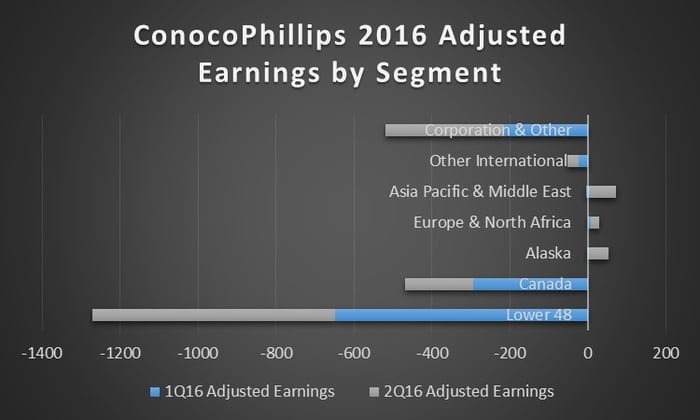 However, its lower 48 segment is by far the biggest weight on profitability. Through the first six months of this year, that segment lost a whopping $1.3 billion. For perspective, just two years ago that same segment earned $950 million over the same timeframe. Needless to say, this is a pretty stunning reversal for what had been the company's biggest profit growth driver.

While weak oil prices in general are one of the greatest drivers of the earnings decline, those prices are having a similar impact on other segments, as well. A more specific impact of oil prices on the lower 48 segment is the company's decision to curtail investments in shale drilling, resulting in its shale production's falling 4% last quarter. The net result is that ConocoPhillips' lower 48 segment is losing ground on both price and volumes.

Furthermore, with its volumes coming down, it is forcing the company to record higher depreciation, depletion, and amortization (DD&A) expenses for this segment. The DD&A expenses are rising mainly because of price-related reserve reductions. In other words, because the company is not drilling enough wells to maintain its production -- let alone grow it -- it is starting to deplete its reserves at a faster rate and needs to account for this change.

Add it all up, and the combination of weak oil prices, lower volumes, and higher DD&A expenses resulted in an abysmal first half of the year in the lower 48.

Is the second-half outlook any better?

Unfortunately, the second-half outlook for the lower 48 is not looking too much better. The company currently plans to run just three rigs during the second half of this year, which is down from 13 at the end of 2015. Because of that, Al Hirshberg, EVP of production, drilling, and projects, expects the "decline in the unconventionals to steepen somewhat in the second half of the year," with Hirshberg estimating that production will drop by around 6% by year-end. That decline in production will add more weight to segment earnings because it will likely lead to high DD&A expenses in the second half.

On a more positive note, oil prices have been on the upswing since diving to start the year. In fact, after averaging roughly $39 per barrel in the first half, oil has been in the mid-$40s for much of the third quarter and could go even higher by the end of the year, according to some analysts. That said, while improving oil prices will help, they will be up against the projected volume decline, which will likely mute the impact unless prices go meaningfully higher.

ConocoPhillips is having a down year, largely because of its lower 48 segment. Not only are weak prices hurting, but declining production and higher DD&A costs are making matters worse. Given the company's production projection, this segment will likely continue to weigh for the rest of the year.