It's hard to blame income-focused investors for coveting CVS Health (NYSE:CVS) stock. The retail pharmacy giant has been sending cash back to shareholders for more than three decades, which is an impressive accomplishment. Better still, the company has a long history of increasing its annual payout, and shares are currently yielding a respectable 1.8%. When paired with the company's aggressive share buyback program, that makes for a solid total shareholder yield.

Still, while CVS Health is a rock-solid company, I think the three stocks listed below are better dividend payers.

Perhaps you've noticed that energy stocks haven't performed so well over the past year, given the unbelievable volatility in commodity prices. That's affording investors a nice chance to buy into Spectra Energy (NYSE:SE), a natural-gas pipeline operator, at a discount.

What sets Spectra apart from other energy companies is that 95% of its profits are derived from fee-based assets. So huge energy-price swings have almost no effect on the company's financial statements, which gives the company's revenue and profits tremendous stability in the most volatile of times. That allows the company to not only survive, but thrive in periods of market turmoil.

At last count, Spectra Energy's backlog of projects is around $10 billion. That's a sizable chunk of future business, and as those projects are completed the company's revenue and profits -- and dividend -- will rise.

Currently the company is projecting dividend increases of $0.14 per share annually between now and 2018. That represents solid growth from today's annual payout of $1.62. And since Spectra has delivered on its dividend growth target for nine years in a row, I believe management when they say they will deliver.

Spectra currently yields 4.5%. Although shares have recovered strongly since the start of the year, I still think this stock is relatively cheap, given its growth projections. That makes Spectra a great dividend stock to consider owning.

Real estate investment trusts, or REITs, are a great hunting ground for income investors. By law REITs must pass at least 90% of taxable income back to investors as dividends, so companies in the space tend to have very high yields.

One of my favorite REITs is STAG Industrial (NYSE:STAG), a fast-growing company focused on acquiring industrial properties that each house only a single occupant. The company focuses on this niche because most other REITS won't touch these properties due to their binary rental risk -- either the property is occupied, or it's not making money. The lack of competition creates inefficiencies and cheap prices, which gives STAG an opportunity to earn strong cash flow for taking on the individual property risk.

STAG's goal is to grow its asset base by 25% annually, and so far the company has had no problem achieving that rate. Given that the company's addressable market is around $250 billion and its current market share is under 1%, I think it stands a good chance of keeping that fast growth going for the foreseeable future.

Income investors will love the fact that STAG's dividend is paid out monthly, and its dividend has been increased by 34% since its IPO. Shares currently yield 5.6%, and with shares currently trading for about about 16 times core funds from operations -- which is REIT-speak for earnings -- right now is a good time to consider buying a few shares.

Very few biotech stocks can be classified as income investments, but Gilead Sciences (NASDAQ:GILD) is one of them. The biotech giant first initiated a payout in 2015 and followed up with an increase this year. Mixing that with its falling share price, its yield has been pushed up to 2.4%.

Gilead's stock has been in the doghouse lately because of declining sales for its hugely profitable hepatitis C franchise. The company generates the bulk of its revenue and profits from the sales of its hep C drugs, so this division's struggles have caused total company sales to actually fall by 5.7% last quarter. And yet, despite that backdrop, I see reasons to be optimistic.

For one, Gilead just won FDA approval for its next-generation hepatitis C drug Epclusa, which treats all six genotypes of the disease. That should help to stem the sales decline in the U.S. I also believe that the drug will be a huge hit overseas, where genotype testing isn't always an option. Since roughly 180.6 million people worldwide are infected with hep C, the addressable market here is still huge.

Beyond hep C, Gilead dominates the HIV/AIDS market, and sales are growing by double digits worldwide thanks to a slew of new drug launches. In addition, the company has an interesting pipeline and a war chest of cash it can use to buy up drugs to complement its current portfolio of products. While we wait for that to happen, Gilead is generating gobs of cash flow that it's pouring into share repurchases, which have drastically dropped the share count over the last few years. 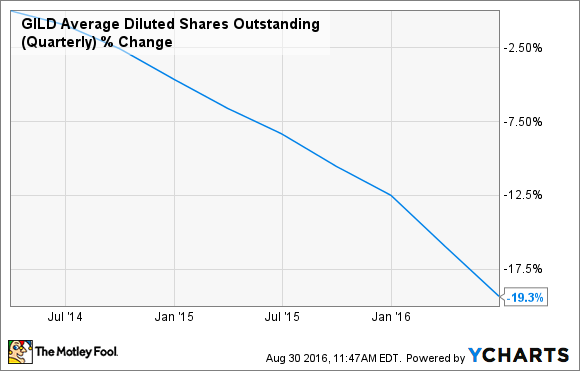 Finally, I like that investors have basically given up on Gilead's stock, having sold it off so hard that it now trades for less than seven times trailing earnings. That means that the bar is so low that any good news from its pipeline or mergers-and-acquisitions activity could cause shares to rally.

You could argue that Gilead is the riskiest stock of this grouping, but I think the combination of an extremely cheap share price and a respectable yield make it a great dividend stock to consider.