August was a wild month for Cobalt International Energy (NYSE: CIE). Shares crashed nearly 40% after the company reported second-quarter results, which not only detailed a costly dry hole but also that the sale of its Angolan assets was about to be terminated. That said, the stock bounced higher after the company's top two executives bought shares. Still, even after that rebound, shares were down double-digits last month: 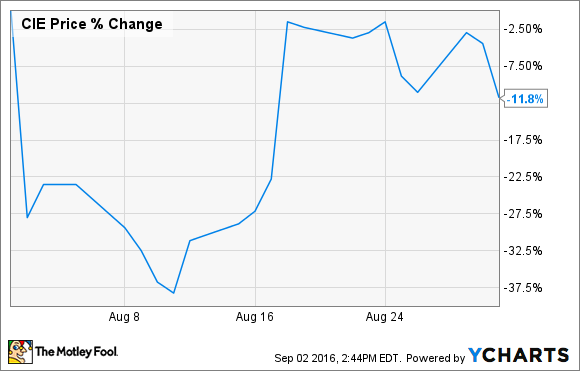 Cobalt International Energy reported a second-quarter loss of $200.4 million, or $0.49 per share, which was much steeper than its year-ago loss of $53.4 million, or $0.13 per share. Driving the decline was the write-off of the company's Goodfellow prospect, which it co-owns with French oil giant Total (NYSE:TTE). The partners started drilling the first Goodfellow well in March, but they did not encounter hydrocarbons upon reaching their target depth last quarter. Because of that, they have to plug and abandon the well. Worse yet, because Cobalt owns a 72.5% working interest in the project, compared to just 27.5% for Total, it is responsible for the bulk of the costs. As a result, Cobalt expensed $107.5 million in costs and $42.4 million for the impairment of the underlying leases during the quarter.

However, that dry hole paled in comparison to the fact that the sale of Cobalt's Angola Blocks 20 and 21 fell through. The company initially signed a deal with Angola's state oil company Sonangol last year, which agreed to purchase the stakes for $1.75 billion. However, the deepening of the oil market downturn made it impossible for Sonangol to get the funding it needed to close the deal. As a result, Cobalt has to find another buyer and likely won't fetch anywhere close to the previous sale price for that asset.

While that was disappointing news, the company's newly hired CEO and COO remain very bullish on its prospects. They showed that during the month, buying 100,000 shares apiece. That insider buying helped pull the stock out of its tailspin, though it was not enough to drive a full recovery.

Offshore drilling is both expensive and risky. That poses a big problem for Cobalt because it does not have the cash flow from legacy producing assets to reinvest in development projects. That forces the company to rely on outside capital, with it hoping that the Angolan asset sale would provide the cash it needs to develop other projects. Given the uncertainty surrounding Cobalt's ability to sell that asset, this is not an oil stock for the faint of heart.