For more than a century, The Coca-Cola Company (NYSE:KO) has given thirsty customers what they want. From its namesake cola drink to its wide line of juices, waters, soft drinks, and sports drinks, Coca-Cola has a long lineup of products, and its brand is known around the world. Along the way, Coca-Cola has built itself into an empire, and longtime investors have earned impressive returns by owning Coca-Cola stock and holding it for the long term. Yet there are many ways to value a company, and many investors wonder if the stock price truly reflects how much Coca-Cola's corporate operations are really worth. Below, we'll take a closer look at the net worth of Coca-Cola by several different measures to see whether the current share price is consistent with the beverage giant's true value.

The simplest measure of Coca-Cola's worth

In the end, a company is worth only as much as investors are willing to pay for it. Coca-Cola currently has about 4.32 billion shares outstanding. With a share price of around $43.50 per share, that puts Coca-Cola's market capitalization at roughly $188 billion. 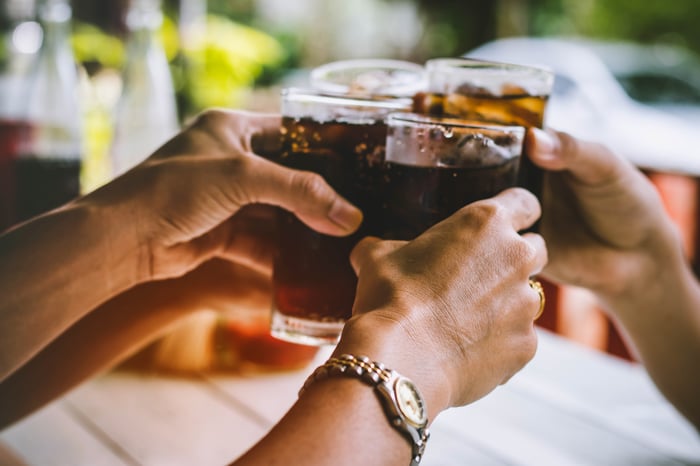 However, market capitalization takes into account the relative amounts of cash and debt that a company has. Some people prefer to look at enterprise value, which ignores the capital structure that a company has chosen and instead focuses on the value of the business that the company generates. When you net out cash and debt, Coca-Cola has an enterprise value of almost $213 billion.

The big premium on Coca-Cola

Often, market participants see value in places where accountants won't necessarily look. When you look at Coca-Cola's balance sheet, you get a much different picture of the value of Coca-Cola.

Coca-Cola's most recent financial statements put a value of $94 billion on its assets. That includes $24 billion in cash and short-term investments, about $5 billion in accounts receivable, and $7 billion in inventory, prepaid expenses, and other current assets. In addition, Coca-Cola's plants, property, and equipment make up almost $13 billion after taking accumulated depreciation into account. Long-term investments account for another $19 billion, including Coca-Cola's stake in Monster Beverage (NASDAQ:MNST) and various bottling operations around the world. When you add in another $26 billion in goodwill, intangible assets, and other long-term assets, you have all of Coca-Cola's balance sheet assets.

Against those assets, Coca-Cola has substantial liabilities. Debt amounts to $48 billion, including $14 billion in short-term borrowings and more than $34 billion in long-term debt. Accounts payable add nearly $10 billion more to Coca-Cola's liabilities, and deferred tax liability and other liabilities bring the total to $67 billion. That gives Coca-Cola total shareholder equity worth $26.8 billion, or roughly $6.17 per share.

Given that the stock trades for roughly seven times its book value, Coca-Cola's true value clearly isn't reflected in its accounting statements. Part of the reason is that it's hard to put an accurate value on the intangible brand that Coca-Cola has created. Late last year, Interbrand did its annual survey of major global brands, and Coca-Cola finished in the No. 3 spot. The rankings put a value of $78.4 billion on Coca-Cola's brand identity, and even though that was down 4% from year-earlier levels, it still recognizes the effort to which the beverage giant has gone in order to sustain its marketing advantage over its beverage rivals.

Finally, you can learn a lot about a company by comparing it to its peers. In some cases, a superior company deserves a premium valuation when you put it side by side with fellow industry rivals. In others, a disparity can reflect short-term factors that can reverse quickly and pull share prices down in the future.

For Coca-Cola, the stock's current valuation puts it in the middle of the pack in terms of trailing price-to-earnings ratios, as you can see below:

However, a couple of things stand out. First, most investors don't see Coca-Cola producing very much growth in the near future, even in comparison to its closest direct peers. Much of the trouble here stems from Coca-Cola's reliance on sugary soft drinks, which have come under fire lately due to concerns about their long-term health impacts. PepsiCo has a more diversified business that includes snack items, and that gives it slightly less risk than Coca-Cola with respect to that particular issue.

Even with tepid growth expectations, Coca-Cola still fetches a substantial earnings multiple in the mid-20s. That likely reflects the high demand for dividend-paying stocks. Coca-Cola has a long history of paying dividends to shareholders, including more than a half-century of annual increases to its dividend. The 3.2% dividend yield isn't that far above PepsiCo's, but Coca-Cola's track record is even longer than what PepsiCo has put together. That could change if low interest rates start to rise, but for now, investors are happy to pay up for Coke shares.

Coca-Cola's net worth puts it among the most valuable stocks in the market. Given its global franchise, well-recognized brand, and ability to face up to challenges in its core industry, Coca-Cola has the ability to keep performing well and justifying its worth to shareholders for years to come.