This industry is having a great year in 2016 -- but the best may be yet to come.

Oclaro got the party started with a strong fourth-quarter earnings report, lifting that stock more than 11% on Aug. 3 alone. Investors didn't see that report as a positive signal for the optical industry, leaving rivals mostly untouched.

That all changed a week later, when Acacia followed suit. The young company, which joined the public markets in May of 2016, doubled its second-quarter sales year over year while driving adjusted earnings 75% higher. Acacia shares soared 41% higher that day, and the momentum carried over into another 11% surge after the weekend.

Acacia's report added another 16% to Oclaro's August returns, and the two component specialists never looked back. Ciena had no big news of its own in August, but managed to gain nearly 12% on the industrywide mojo its component suppliers were sending out. 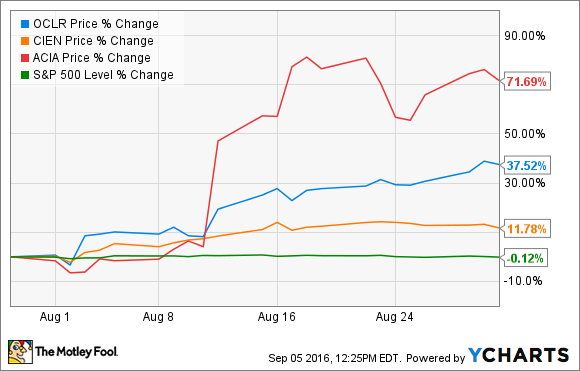 Acacia's report was the biggest driver of optical gains last month. The company crushed its second-quarter targets, and CEO Raj Shanmugaraj followed up with some cheerful comments on the state of his industry:

The market opportunity we are targeting is large and growing. The growth in bandwidth demand has caused an increase in investments across long-haul, metro, and inter-data center networks, with most of that investment focused on speeds of 100G and higher. With the growth of large data centers and content moving closer to the consumer, we are seeing strong demand for our products across metro and inter-data center networks.

The CEO just painted a bright future for all types of high-speed networking tools. Sector rivals with longer operating histories have seen their revenue growth stalling in recent years, and could use a fresh kick-start at this point.

Ciena followed up with its own third-quarter results at the very start of September. That report exceeded Wall Street's bottom-line expectations and inspired several analyst upgrades. The optical hits keep on coming, and every ticker mentioned here has absolutely crushed the market in 2016.

As large telecoms are bidding on another batch of spectrum licenses with a glance toward next-generation 5G networking rollouts, I expect high demand for fiber networking tools for the next few years. Oclaro shares have doubled this year, while Acacia investors have notched more than a triple already -- and this may just be the beginning of a long-lasting industry trend.