Fast-food pioneer McDonald's (NYSE:MCD) has long been the stalwart in its industry, transforming the nature of the restaurant business and creating a trend that has lasted for more than half a century. With more than 36,000 locations around the world, McDonald's has a global presence, and its golden arches are known the world over as an American icon.

At the same time, long-term investors have earned huge returns by owning McDonald's stock and holding it over the decades. Yet there are many methods for coming up with a corporate valuation, and many investors are curious whether McDonald's stock accurately reflects its actual worth. Below, we'll take a closer look at the net worth of McDonald's, using several different measures, to see whether the current share price is consistent with the fast-food giant's true value. 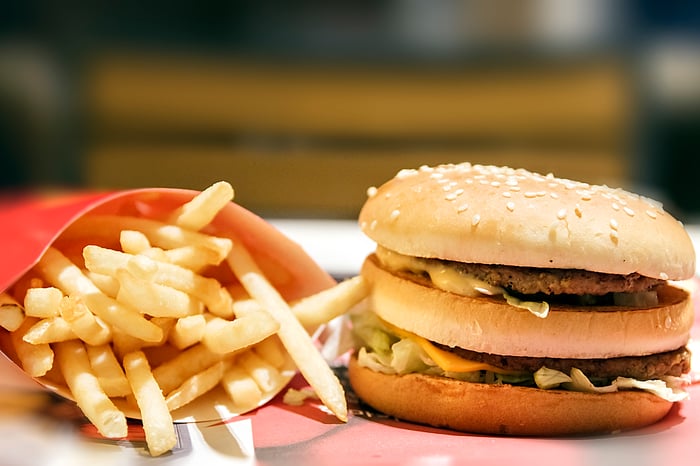 The simplest measure of McDonald's worth

In the end, the market itself puts the best measure of value on a company. McDonald's currently has about 853 million shares outstanding. With a share price of around $117 per share, that puts McDonald's market capitalization at right around $100 billion.

Some investors don't like the fact that market capitalization doesn't take into account how much cash and debt a company has. Instead, they prefer enterprise value, which goes beyond those figures to drill down on the value of the actual business that produces profit for the company. When you account for McDonald's cash and debt, its enterprise value works out to more than $121 billion.

However, you get a much different picture when you look at McDonald's from an accountant's perspective. The company's balance sheet provides a different view of McDonald's, and it's one in which the fast-food company seems to be richly valued by the market.

McDonald's most recent financial statements put a value of $33.1 billion on its assets. That includes $3.1 billion in cash and short-term investments, another $1.3 billion in accounts receivable, and $600 million in inventory, prepaid expenses, and other current assets. In addition, McDonald's plants, property, and equipment make up almost $23 billion after taking accumulated depreciation into account. Long-term investments account for less than $1 billion, and adding in about $4 billion in goodwill and other long-term assets brings you to the total for the restaurant operator.

That leaves a scant $640 million in shareholder equity for McDonald's shares. That works out to a book value of just $0.75 per share, or less than 1% of the company's current share price. Trading at a premium to book value isn't all that unusual for a stock, but the extent of the premium here reflects a gradual deterioration in McDonald's book value in recent years.

For those who believe that investors are rational, it's easy to conclude that McDonald's true value clearly isn't reflected in its accounting statements. For instance, a huge part of McDonald's worth comes from its brand identity, and in its most recent annual survey of major global brands late last year, Interbrand ranked McDonald's No. 9. The report put a value of $39.8 billion on McDonald's brand identity, and even though that was down 6% from year-earlier levels, it still recognizes the lengths to which the fast-food giant has gone to produce a marketing message that puts its competitors to shame.

Finally, you can learn a lot about a company by comparing it to its peers. In some cases, a superior company deserves a premium valuation when you put it side by side with fellow industry rivals. In others, a disparity can reflect short-term factors that can reverse quickly and pull share prices down in the future.

For McDonald's, the stock's current valuation puts it in the middle of the pack in terms of trailing price-to-earnings ratios, as you can see below:

However, a couple of things stand out. First, McDonald's large size makes it harder to produce meaningful growth, especially in comparison to smaller competitors. Yum! Brands (NYSE:YUM) and Wendy's (NASDAQ:WEN) start from smaller bases, so their growth initiatives can produce more visible results.

Yet McDonald's retains its leadership role in dividends. The company has a higher yield than its peers, and it has a long history of annual dividend increases stretching back for 40 years. If the fast-food restaurant chain sticks with its past practices, another hike in its quarterly payout should come before the year is out.

McDonald's net worth reflects the fact that it is one of the best-known brands in the market. Even though the company has gone through ups and downs, its staying power makes McDonald's a stalwart stock that has stood the test of time and should continue to do so in the future.