Shares of Targa Resources (NYSE:TRGP) increased 17.5% in August, mostly on the back of its earnings result on August 3rd. The strange thing is, Targa's results weren't exactly great. So you have to wonder what Wall Street is seeing in this stock 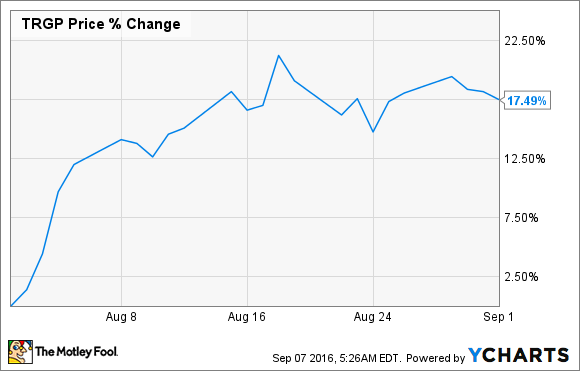 After Targa Resources decided to buy out its subsidiary partnership last year, shares got absolutely pummeled. However, earnings results since that time have helped repair the damage, so it would seem that investors have warmed to the idea of it being a combined company.

It would seem that it doesn't take much to satisfy concerns of investors, though, because Targa's results for the quarter weren't that great. Net income swung into the loss category and distributable cash flow declined 19% compared to this time last year. That second one is pretty remarkable because many investors choose to invest in pipeline and midstream companies such as Targa for their stable cash flows. Targa's revenue stream, however, is tied a little closer to commodity prices than others because about 75% of its revenue comes from fee based contracts, whereas similar companies typically have 85% or more of their contracts structured as fixed fee.

The one good thing to come out of this announcement is that, even though there was such a sharp decline in distributable cash flow, Targa was able to completely cover the payout to both its common and Series A preferred shares. That's a slightly promising sign.

Despite the recent run-up in shares and Targa's near 8% yield, it's hard to get excited about this stock. The company is barely meeting its cash obligations for its payout today, and its capital spending program isn't a very robust one. So there doesn't look to be a whole lot of growth coming down the pipe. Perhaps things could change as its Liquefied Petroleum Gas exports pick back up and Targa's export terminal sees a boost, and increased gas drilling in the Gulf Region leads to greater gathering and processing demand. Until these things happen, though, Targa's results will be hampered and it may be best to wait for better times before jumping into this stock.