Shares of Frontier Communications (OTC:FTR) dropped 11.5% in August 2016, according to data from S&P Global Market Intelligence. The stock simply never recovered from a disappointing second-quarter earnings report at the very start of the month.

Frontier's second-quarter sales were lower than expected, and the adjusted net loss was larger. The recently completed acquisition of Verizon's (NYSE:VZ) wireline services in California, Texas, and Florida weighed heavy on this quarter's results. 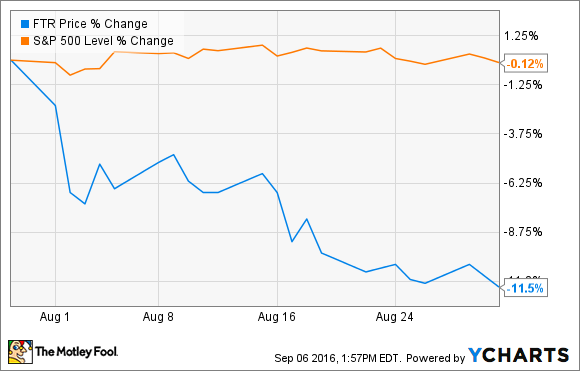 Looking ahead, Frontier sees big benefits from the costly Verizon deal. An earlier estimate of $750 million in annual cost synergies was boosted to $1.25 billion, based on the early going.

If that works out as planned, August's plunging share prices will be remembered as a big mistake and a great buy-in opportunity. That being said, Frontier's cash flow engines are running on fumes these days, and its revenues tend to slide over time unless temporarily boosted by large market buyouts. All things considered, I'm quite satisfied to stay on the sidelines for this regional telecom.