The past year has been a rough one for investors in Williams Companies (NYSE:WMB) and its MLP Williams Partners (NYSE: WPZ). The worsening of the energy market downturn, when combined with Williams' failed mergers and credit concerns for both companies, resulted in their equity values plunging nearly 70% at one point: 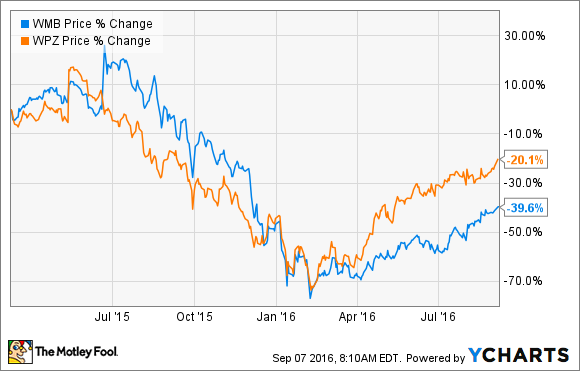 While both companies are pulling out of that tailspin, they still have a long road to recovery ahead of them. That said, they're on a path that should put volatility in the rearview mirror. The two took another crucial step forward this week after announcing that Williams Partners is exploring options for its Geismar olefins plant.

Williams Partners is currently looking into two potential options for its stake in the Geismar plant, which it has owned since 1999. First, it could sell the facility to the highest bidder and use that cash to reduce debt and reinvest in its backlog of fee-based capital projects. That would reduce its needs to tap the capital markets to fund the estimated $2.4 billion shortfall between its current estimated capital resources and its projected growth capex needs over the next two years.

Meanwhile, its other option would be to sign up the plant's capacity under a long-term, fee-based service agreement as opposed to earning a margin on the commodities produced at the plant. That would enable Williams to continue to collect cash flow from the plant while at the same time reducing the overall volatility of its cash flow. 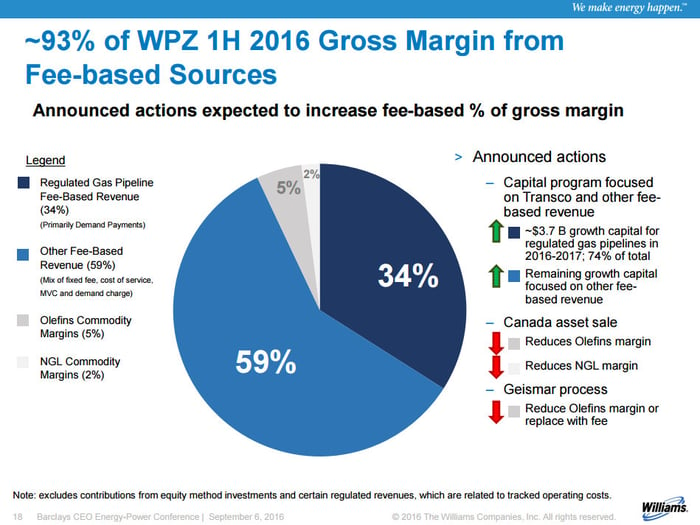 By eliminating or converting that to a fee, Williams Partners would be one step closer to being 100% fee-based, which would lead to very stable cash flow in the future.

Making sense of the margin

Commodity-based margins cut both ways. When times are good, these margins can be pretty lucrative. However, when conditions deteriorate, these margins get squeezed. That results in uneven cash flow, which can be devastating to MLPs like Williams Partners, which rely on steady cash flow to support their generous distributions.

That has certainly been the case at Geismar, as its margin has fluctuated wildly over the past year. For example, its margin in the first quarter of this year was $60 million higher than the prior year because production was intermittent in the first quarter of 2015. Meanwhile, margin in the second quarter of this year was favorable by $12 million, reflecting strong operational production levels that were partially offset by lower ethylene prices. While this volatility has been in Williams' favor over the past several quarters, it has gone against the company in prior quarters.

For most petrochemical companies, commodity price volatility is par for the course. However, the key difference is that these companies typically do not pay out virtually all of their cash flow via distributions. As a result, they have more margin for error than Williams and are therefore better suited to handle the volatility. That is why selling the asset to a company that can manage the volatility or making the switch over to a fee-based arrangement makes sense for Williams.

Williams' investors have had about all the volatility they can handle over the past year. That is why the company is actively taking steps away from things that can lead to instability. It is a move that should result in greater long-term stability in both the equity value of Williams and Williams Partners as well as their distributions to investors.