Please ensure Javascript is enabled for purposes of website accessibility
Log In Help Join The Motley Fool
Free Article Join Over 1 Million Premium Members And Get More In-Depth Stock Guidance and Research
By Brian Feroldi, Sean Williams, and Jason Hall – Sep 8, 2016 at 9:21AM

Looking for stocks that offer 100% upside? Here are three for you to consider. 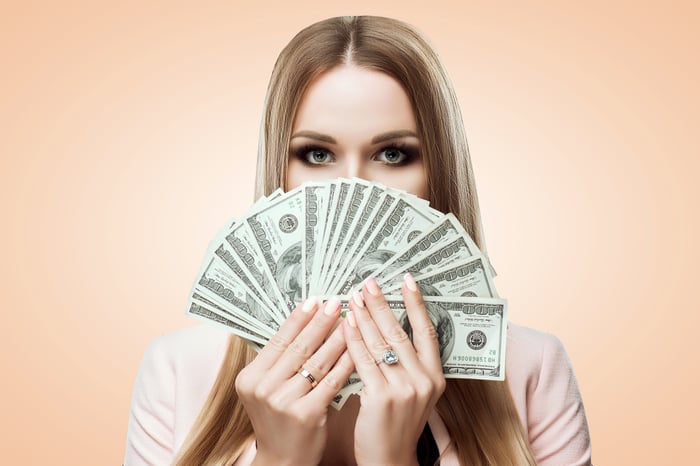 Every growth investor wants to buy a stock that will go on to double in value quickly, but finding those companies before they go on a huge run is both difficult and risky. After all, companies that stand the best chances of doubling are likely to be growing sales and profits at very fast rates, causing the market to reward them with sky-high valuations. That can make them subject to huge momentum swings, which can make them difficult to own.

Despite all of that, we Fools do think that it can make sense to dedicate a small portion of your portfolio to stocks that offer explosive upside potential if everything goes according to plan. Below we discuss three stocks that could do just that: Vertex Pharmaceuticals (VRTX -1.11%), BofI Holding (AX -1.64%), and CalAmp (CAMP -4.95%).

Brian Feroldi: It's rare for a company's stock to double without meaningful growth in revenue or earnings (or both), so stocks that are still in hyper-growth mode are a natural place to look for an investment with 100% upside.

One stock that I think qualifies as a candidate to double is Vertex Pharmaceuticals, the dominant player in treating cystic fibrosis (CF). Vertex is only a few months into launching its newest CF treatment, Orkambi, but management is already guiding for sales to top $1 billion this year. Adding in sales of the company's other CF drug, Kalydeco, sales are expected to grow more than 71% this year to $1.7 billion, and another 38% next year to $2.4 billion.

That's a torrid rate of growth on the top line, but believe it or not, the figures look even better on the bottom line. Analysts are currently projecting earnings to grow more than 53% annually over the next five years, which is crazy-fast for a company that's trading at a forward P/E of 31.

Those growth rates might sound extreme, but I don't think they're completely insane. After all, Vertex plans to widen the labeling for both drugs in the U.S., and to launch the drugs in Europe, Canada, and Australia once reimbursement is finally in place.

If the company can execute flawlessly on those lofty projections, it wouldn't shock me to see shares double from here.

Waiting for the smoke to clear 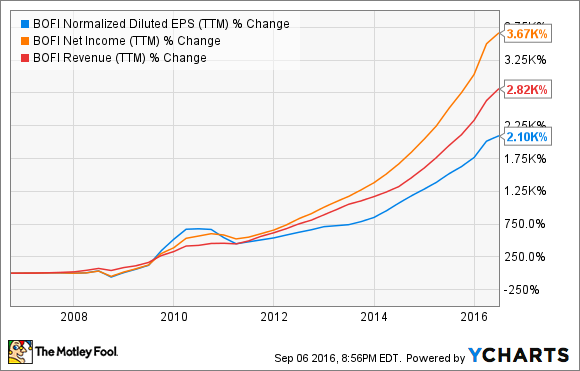 But short attacks and a lawsuit alleging all sorts of improprieties -- and even illegal activities -- have weighed heavily on the company's stock price for nearly a year now: 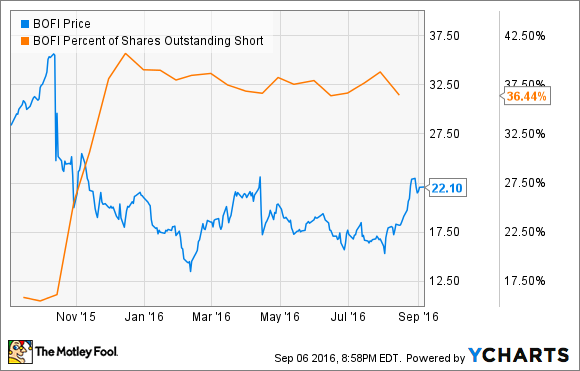 Frankly, I find little reason to believe even a fraction of the allegations made against the bank. It has gone through more than one year of its regular regulatory oversight and examinations, made multiple acquisitions that require even further regulatory scrutiny, and seen a former employee who led the allegations against the company be denied whistleblower status. It's incredibly hard to imagine bank regulators not going after any bank accused of the things BofI has been accused of with both barrels, but that hasn't happened.

What has happened is that BofI has continued to deliver strong growth and some of the lowest costs in the banking sector, due to its internet-only model. Not only have profits continued to go up, but the bank's book value per share -- a measure of the value of its assets -- has also continued increasing at double-digit rates.

If BofI can move beyond the uncertainty of the current short-seller-driven allegations, while also continuing to execute on its strong growth, it's not hard to see its stock price more than doubling, and within a few years' time.

Don't miss out on this revolution

Sean Williams: If you're looking for a growth stock that could double, and you're a patient investor, my suggestion would be to take a closer look at wireless communications solutions company CalAmp.

Because of CalAmp's relatively small size, it tends not to get a lot of analyst coverage, making it prone to volatility come earnings time, especially when it comes up short of the few estimates available. Making matters more precarious recently was the announcement in April that customer EchoStar (SATS -0.30%) was planning to discontinue purchasing from CalAmp, which led CalAmp to announce that it would wind down its satellite segment in the coming months. Although EchoStar represented only around a tenth of CalAmp's revenue, investors slammed the stock.

Despite these concerns, there are numerous reasons to be excited about CalAmp's future. In February, CalAmp agreed to buy car-tracking service LoJack for $134 million, with the expectation that it would add $0.15 to $0.25 in adjusted earnings per share in fiscal 2017, as well as build new relationships with auto dealers and companies that deal with vehicle telematics technologies and applications. In other words, LoJack would add profits, and be yet another opportunity to get CalAmp's foot in the door of the Internet of Things (IoT) for automobiles. In fact, $27.9 million of first-quarter 2017 revenue was derived from LoJack, with management noting that revenue-recognition synergies are running ahead of schedule.

Beyond just inorganic growth, the elephant in the room is CalAmp's opportunity to benefit from the explosion in Internet of Things growth. According to BI Intelligence, the number of IoT devices installed is set to grow by a compound annual rate of 41% between 2015 and 2020, with 24 billion IoT devices installed by 2020. Some $6 trillion is set to be invested in IoT over the next five years, with the bulk of that money going toward the hardware and software solutions that CalAmp specializes in.

Analysts jumped the gun a bit in predicting IoT growth, but long-term investors who are patient should be amply rewarded by hanging onto the fast-growing CalAmp.

Brian Feroldi owns shares of BofI Holding and Vertex Pharmaceuticals. Like this article? Follow him on Twitter where he goes by the handle @Longtermmindset or connect with him on LinkedIn to see more articles like this.