Finding a high-quality company that pays a dividend is easy. The hard part is finding one that offers exceptional value, with an above-average yield and an attractive valuation. With the market near all-time highs, finding attractive dividend stocks has become more difficult. Thankfully, we're here to help.

We asked five of our contributors to each discuss a dividend stock that they think should be on every dividend investors' shopping list. Here's what they had to say about Home Depot Inc. (NYSE:HD), General Motors Company (NYSE:GM), Hanesbrands Inc. (NYSE:HBI), Nucor Corporation (NYSE:NUE), and Pfizer, Inc. (NYSE:PFE).

A retailer built to last

Brian Feroldi: The retail industry is undergoing massive changes right now, given intense competition from online-only sellers. That's making it increasingly difficult for investors to identify winning concepts that can stand the test of time. However, one dividend-paying retail company that I believe is truly built to last is Home Depot, which makes this a great company to put on your radar.

Home Depot has turned itself into the world's largest home-improvement retailer, and in the process has built itself a durable moat that will keep it safe against online competition. The company's decades-long focus on both contractors and the do-it-yourself crowd continues to pay off. Same-store sales rose by a strong 4.7% last quarter, which is a result most retailers would kill to put up.

Over the long term, I believe that company has several trends working in its favor. For one, millions of baby boomers are set to retire, and one obvious way for them to pass the time is to renovate their homes. Two, housing demand from the millennial generation should pick up in the years ahead, as they continue to form new households after getting married and having kids. Finally, Home Depot's online sales should continue to rise at above-average rates, since more customers will choose to buy online but pick up or return their orders in the stores. Doing so avoids the need to pay shipping costs, which is an attractive benefit on both sides of the transaction that online-only retailers can't match.

The only knock against Home Depot's stock is that it's priced at nearly 23 times trailing earnings, which has pushed its dividend yield down to 2%. That's a tad expensive, but given the trends that are working in this company's favor, this is a great company to add to your watch list now and buy on any dips.

Tim Green: With auto sales in the U.S. showing signs of peaking, investors are no doubt concerned that heavy promotions aimed at moving metal will begin to eat away at General Motors' profits. For dividend investors, the prospect of declining earnings generally means that the dividend could be in danger. But that's not really the case with General Motors.

General Motors expects to earn at least $5.50 per share in adjusted profits this year. Whether the company can sustain that level of earnings next year depends on demand for automobiles, but the good news for dividend investors is that even a steep drop in earnings wouldn't threaten the payout. Currently, General Motors pays a quarterly dividend of $0.38 per share, putting the payout ratio at a scant 28%. Earnings would need to fall precipitously for the dividend to be at risk.

Get your Hanes on this

Daniel Miller: When looking for dividend stocks to throw on my shopping list, I take note of companies that have the potential to start ramping up dividend payouts. One stock that I believe is well positioned to begin increasing its current 1.6% dividend yield is none other than Hanesbrands Inc.

Whether you know the company because of Michael Jordan's commercials for its namesake Hanes brand, or through other well-known brands such as Champion, Playtex, or L'eggs, you've likely purchased its products before -- Hanesbrands products are found in 80% of American households, according to HBI Equity Tracker.

Those well-known and well-established brands, in combination with the company's extensive and efficient manufacturing and distribution network, provide solid margins and profitability. Over the past few years, Hanesbrands' focus was to deleverage its balance sheet, which it did very well; the company was upgraded by Moody's in late 2014.

Then Hanesbrands took on more debt to make six acquisitions over the past three years, but again, plans to pay down debt over the next 12 to 18 months. That's when the doors should open for the company to focus its cash on increasing its dividend, in my opinion, with a better group of brands and stronger bottom line due to the synergies created.

Hanesbrands has proven it can successfully take on acquisitions and utilize its existing manufacturing to create synergies, and we know that the company can pay down debt quickly and efficiently. If it continues to do that over the next year, I think the company will show it can also return value to shareholders by increasing its dividend over the next decade.

A dividend stock as true as steel

Neha Chamaria: One dividend stock I'm eyeing right now is Nucor Corporation, especially after its 10% drop in August. Being in a commodity-centric business like steel isn't an easy job these days, but Nucor has managed to keep its head above water by operating at the lowest possible costs. Nucor's net earnings jumped a staggering 87% year over year during the second quarter, as its core steel mills segment benefited from higher volumes, better prices, and lower input costs.

An interesting aspect of Nucor that's often overlooked is its recycling business. As North America's largest recycler, Nucor can recycle tons of scrap metal into saleable steel and steel products at low costs. That's a huge competitive advantage that should keep Nucor ahead in the race.

Aside from that, Nucor is adding more high-margin value-added steel products to its portfolio, which should help offset the volatility in its upstream business. The company's also expanding aggressively, as evidenced by its recent acquisition of Joy Global's steel-plate mill in Texas, and a joint venture with Japan-based JFE Steel to build a plant targeting Mexico's growing automotive market.

Given Nucor's low-cost advantage and focus on growth, you can almost vouch for its capability to maintain its dividend streak: Nucor has now paid out a dividend for 42 consecutive years. In 2015, Nucor earned $5.55 in free cash flow per share, but paid out only about $1.49 per share in dividends.

You may ask: "Oh, but isn't Nucor pricey at a trailing P/E of 33?" That is steep, but Nucor is also trading at a forward P/E of only 18, suggesting strong earnings growth going forward. Combine that with a dividend yield of 3%, and Nucor looks like a good choice for income investors today.

Todd Campbell: Pfizer, Inc.'s streak of sliding sales is about to change. Since losing patent protection on its $13 billion-per-year cholesterol drug Lipitor, Pfizer's sales have sunk from over $65 billion to less than $50 billion. However, a restructuring, new product launches, and savvy acquisitions have the company forecasting its first full-year sales growth in years, and that should grab dividend investors' attention. 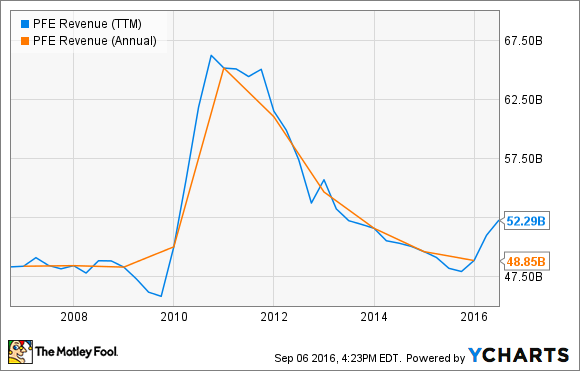 Pfizer's revenue was up 15% year over year to $26.1 billion in the first six months of this year, and its second-quarter sales improved $13% to $13.1 billion. Hospira, a specialty drug company Pfizer bought last year, is responsible for a lot of that growth, but not all of it. After removing Hospira's impact, Pfizer's second-quarter revenue was still up 4% year over year thanks to fast-growing sales of recently launched drugs, including the cancer drug Ibrance. Revenue at Pfizer's Innovative Health business, which includes Ibrance, reached $14.1 billion in the first two quarters of this year, up 18% from the same period a year ago.

Pfizer's operational growth over the past six consecutive quarters has management targeting sales of at least $51 billion this year, up from $49 billion last year. Leveraging sales against its fixed costs should allow for even faster bottom-line growth at the company. In the first six months of the year, earnings per share grew 21% to $1.30, and Pfizer estimates EPS will be between $2.38 and $2.48 in 2016, up nicely from $2.28 in 2015.

Improving top and bottom lines should provide plenty of financial firepower to support shareholder-friendly dividends. If so, then in coming years this dividend stock could pay off nicely for income portfolios.