Colgate-Palmolive reported a decline in sales in the most recent quarter, and that could continue for the rest of the year. Still, earnings continue to rise.

Colgate-Palmolive Co. (CL -0.01%) sales dropped 5% in the most recent quarter year over year, a trend that has held in the past few quarters as global sales look weak. For the coming third quarter and full year 2016, those sales are likely to keep falling. Still, income is growing steadily and seems poised to continue rising even in the face of revenue decline. Here's why Colgate still looks like a great addition to a stable portfolio, even with falling sales.

Sales fall -- but it's not as bad as it looks

Colgate management blamed the second-quarter sales drop mostly on foreign currency fluctuations. Colgate gets nearly 80% of its sales internationally, so sales in those currencies, which have continued to lose value relative to the U.S. dollar, have looked weaker than last year. For the rest of 2016, don't expect much to change -- CEO Ian Cook said during the recent earnings call that sales were likely to continue falling the rest of this year as global currencies remain depressed. 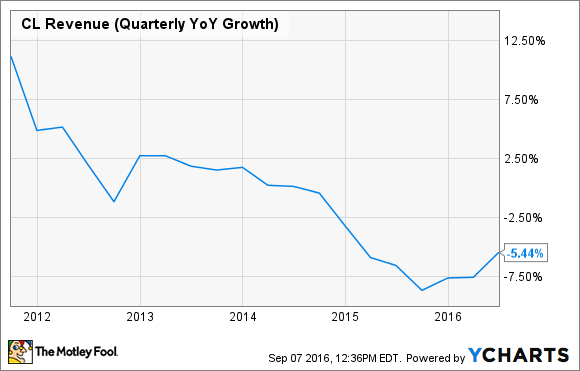 Even though reported revenue fell year over year, management noted that organic sales growth was still positive and is expected to continue to rise in the second half of the year. Adjusting for currency fluctuations and divestments (including the deconsolidation of its Venezuelan operations), Colgate's Q2 sales would have risen 4.5%.

Sales growth does appear to be turning around for the better. The following chart shows that sales had been falling from quarter to quarter from 2015 Q2 to 2016 Q1 but finally turned positive in Q2 of this year over Q1. Even though full-year 2016 will likely still result in a decline over 2015, estimates for Q4 of this year are positive for what would be the first time in two years. Furthermore, estimates for full-year 2017 sales are $16.17 billion, which would be a 4.5% increase over expected 2016 sales.

Despite these currency and sales issues, earnings are rising. As sales fell during the recent quarter, gross margin grew from 58.3% to 60.2%, which helped operating profit to grow 1.3% year over year. Net income rose 4.5% to $600 million. The company expects earnings to continue rising throughout the year and to see double-digit income growth for full-year 2016 over 2015.

Part of the reason earnings are expected to jump so much in 2016 year over year is that during the fourth quarter of 2015, Colgate wrote off its Venezuelan operations, which caused a loss for that quarter and lowered full-year income. However, the 2016 income growth will also be driven by increased margins through higher selling prices and cost-cutting initiatives. Colgate started a "Global Growth and Efficiency Program" in 2012 that sought to reduce structural costs by streamlining and updating its supply chain and other processes, which has helped to steadily increase earnings. The company continues to focus on these initiatives, which should give investors confidence in Colgate's continued earnings growth potential.

Regardless of sales headwinds, Colgate is a solid investment

Colgate's sales will continue to struggle this year as foreign currency headwinds continue to affect the nearly 80% of its business that's outside the United States. When these currency fluctuations bottom out or turn the other way, as cyclical currency swings do, then year-over-year sales growth will look as positive as organic sales growth suggests.

But don't invest in Colgate for a possible change in short-term currency -- invest in Colgate for its long-term earnings growth potential, its proven operational efficiency program, and its global market leadership in its most important categories (such as 34% in manual toothbrushes and 44% in toothpaste). Even though Colgate's price-to-earnings ratio of around 48 looks somewhat expensive now, its forward P/E of just 24 times estimated 2017 earnings means this could be a great time to buy Colgate for continued future earnings growth.

Could This Sleepy Dividend King Suddenly Wake Up?

If You Like Dividends, You Should Love These 3 Stocks
366%