Please ensure Javascript is enabled for purposes of website accessibility
Log In Help Join The Motley Fool
Free Article Join Over 1 Million Premium Members And Get More In-Depth Stock Guidance and Research
By Dan Caplinger - Updated Apr 5, 2018 at 11:14AM

The entertainment giant has been a pioneer in its industry, but just how big is Disney's net worth?

Entertainment giant Disney (DIS 2.56%) has built itself up from its historical start in movies to become a huge media conglomerate, encompassing television, cinema, theme parks, retail outlets, and interactive entertainment. Much-loved characters from its foundation still remain popular, but Disney has also worked hard to buy up sources of new content, with acquisitions like Pixar, Marvel, and Lucasfilm dramatically bolstering its media library. Long-term investors have profited handsomely from owning Disney stock. Yet some of those who follow Disney want to know if its stock accurately reflects its actual worth. Below, we'll take a closer look at the net worth of Disney by several different measures to see whether the current share price is consistent with the entertainment conglomerate's true value.

The simplest measure of Disney's worth

The first place to look for a simple valuation of a company is the price that the stock market puts on it. Disney currently has about 1.61 billion shares outstanding. With a share price of around $94 per share, that puts Disney's market capitalization at roughly $150 billion. 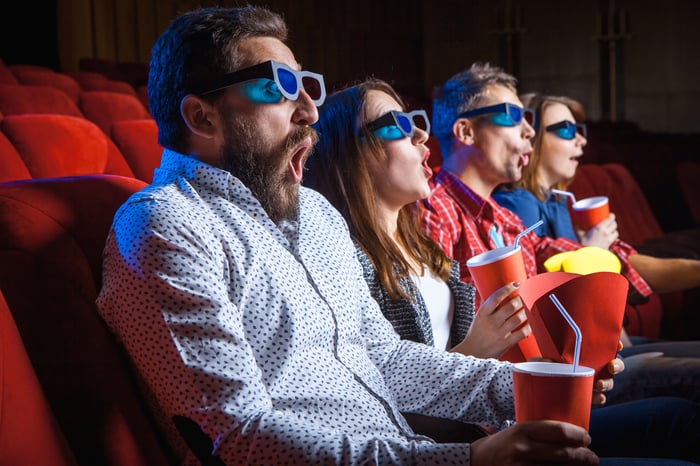 As an alternative to market cap, some investors prefer to account differently for the cash and debt held within a company's capital structure. Enterprise value looks only at the value of the actual business assets that go toward bringing in revenue and net income for a company. In Disney's case, when you take into account the cash on its balance sheet and its outstanding debt, you'll get an enterprise value that puts Disney's worth at $165 billion.

What the accountants see as Disney's true value

The stock market gives one perspective of a company's value. When you look at financial statements, you can get a much different picture of the net worth of a company. For Disney, a look at the balance sheet shows some disparities between the market's perception of the stock and what accountants would focus on in their analysis.

Disney's most recent financial statements put a value of about $91 billion on its assets. That includes roughly $5 billion in cash and short-term investments, another $9 billion in accounts receivable, and about $3 billion in inventory and other current assets. In addition, Disney's plants, property, and equipment make up almost $27 billion after taking accumulated depreciation into account. Goodwill and other intangibles account for roughly $35 billion, and the remaining $12 billion is made up of long-term investments, receivables, and other assets.

Against those assets, Disney has large liabilities. Debt amounts to about $20 billion, of which $15 billion is long-term and the rest either short-term borrowings or the current portion of longer-term obligations. Accounts payable and unearned revenue add another $13 billion, and deferred tax liability and other longer-term liabilities contribute more than $9 billion to the total. In all, Disney has almost $43 billion in liabilities on its balance sheet.

That leaves $48 billion in total shareholder equity. Roughly $4 billion of that is attributable to Disney's minority interests, leaving the remaining $44 billion for common shareholders. When you divide by the number of shares outstanding as of June 30, Disney's book value comes out to $26 per share. That's barely over a quarter of the company's stock price, showing the premium that investors put on the company above its accounting-based value.

Part of the reason for the difference is that Disney has value that its accounting doesn't entirely reflect. For example, Disney has built up a huge asset in its brand. In its most recent annual survey of major global brands late last year, Interbrand ranked Disney No. 13 in the world, and the report valued the brand alone at $36.5 billion, up 13% from year-earlier levels. Disney has to keep spending in order to support its brand value, but past marketing efforts have already paid off with name recognition and customer loyalty that will serve as a strong foundation for future growth efforts.

Finally, one way to look at Disney's value is to compare it to its peers. High-quality companies trade at higher valuations, but sometimes, differences in valuation expose potential dangers or reveal opportunities.

For Disney, the stock's current valuation looks very similar to some of its peers in the media business, as you can see below:

For the most part, these three companies have similar characteristics. They all trade with earnings multiples in the mid-teens, and they have similar dividend yields. Disney has the slowest anticipated growth rate of the three, but it's also the largest of the companies, making it harder to produce high-speed growth.

Given the high regard and strong reputation that the company has, Disney's net worth accurately reflects the fact that it is the leader in its industry. Despite some concerns about trends that could challenge its position in the cable television arena, Disney's efforts to capture as much high-value content as possible should pay off for decades to come.