The clothing retailer had another tough three-month stretch. What should investors think?

Shares of Abercrombie & Fitch (ANF 1.80%) are down double digits after reporting quarterly results earlier this week. The company posted decreasing foot traffic, leading to losses across the board. What are the implications -- not just for A&F, but other clothing retailers?

The slow end of cool kids and shopping malls

It has been a rough go for the young adult luxury clothier. Sales and profits have been on the decline for years as the company's target market loses interest in both shopping malls and A&F's risque image. 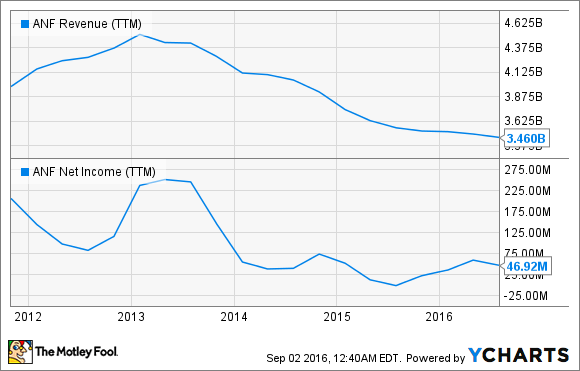 The last quarter showed the trend continuing, with revenue declining 4.2% and the company's quarterly loss widening to $12 million. The reason cited was comparable sales declines of 4%, on top of another 4% drop during the first quarter. Company management said foot traffic at "flagship and tourist locations" continued to struggle.

Somewhat offsetting the dismal shopping mall results was decent performance from the online direct-to-consumer business. Total sales for A&F were $783 million, with 23% of those sales coming from online. Twenty-one percent of sales were online the same period last year, representing a 9.5% increase.

However, digital increases will have to be better than that to offset the decay in physical stores. While a 9.5% year-over-year gain looks robust, it actually trails the online retail industry average of 14% that has been notched in 2016 and for the last half a decade. Anything less than double-digits is just not making the cut these days.

A&F management said to expect more of the same business performance during the second half of the year. With the company's clothing and selling style falling out of favor with teens and 20-somethings, there doesn't appear to be much to look forward to yet.

What other retailers are doing

During the earnings call, A&F President and Chief Merchandising Officer Fran Horowitz-Bonadies talked about changes in young consumer preferences and what the company is doing to keep up"

Research into today's young adult consumer demonstrates a shift in what confidence means. It is no longer outer directed but center directed. Image is less important than character and it is more important to feel confident than to appear confident.

In response, the Abercrombie brand is shifting to a casual luxury look, rather than what has become the company's historical "sex sells" approach to clothing. For A&F, that means quality and style at an appropriate price. New marketing is under way, especially pushing denim and other classic and more comfortable looks.

In contrast, fellow shopping mall retailer American Eagle Outfitters (AEO 4.10%) is posting new records for revenue and earnings this year. The company is having success opening new stores not just in the U.S. but internationally as well. What is the difference?

The company has focused on its online presence, and has the ability to ship direct-to-consumer in 81 countries without necessarily needing the physical presence to do so. American Eagle's online brand-building has paved the way for physical store entrance into foreign markets.

Another big differentiator is American Eagle's high-quality fashion at affordable prices. This contrasts with A&F's "appropriate price" message. Abercrombie's problems don't end with shopping mall woes. Consumer trends now prefer a cheaper alternative. While the company acknowledges self-confidence has shifted away from outward appearances, it seems to be missing the point that young shoppers don't need the accompanying price tag as well.

I see two big takeaways from Abercrombie's last quarterly results. First, although the shopping mall experience may be in global decline, former darlings of that arena can still thrive if their traditional business is complemented with strong growth online. Second, today's global consumer is more price conscious than ever.

Combining those two factors together makes me doubt A&F's ability to thrive in the retail industry of the future. Competitors like American Eagle, on the other hand, have already come up with a strategy to win over young fashion enthusiasts. Until Abercrombie & Fitch figures out how to properly use its website and recaptures young fashionista interest, I'm staying away from the stock.