Please ensure Javascript is enabled for purposes of website accessibility
Log In Help Join The Motley Fool
Free Article Join Over 1 Million Premium Members And Get More In-Depth Stock Guidance and Research
By Jeremy Bowman – Sep 8, 2016 at 11:12AM

The crafty online marketplace jumped on a strong earnings report and a bullish analyst recommendation.

Shares of Etsy Inc. (ETSY -0.69%) were marching higher in August, following a bullish recommendation and a strong earnings report. The stock gained 34%, according to S&P Global Market Intelligence, as the good news came at the beginning of the month. 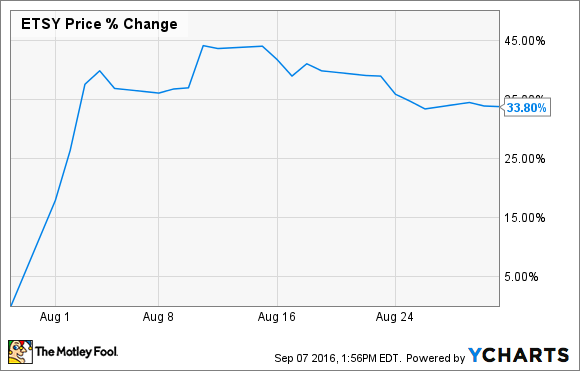 The online artisan marketplace first popped on Aug. 1 when it got a bullish note from Citigroup's Mark Kelley who called it a buy and put a $14 price target on it. Kelley said the company had carved out a niche in the larger e-commerce space, creating a brand name for itself, making it the first place to go for crafty, artisan products. He also credited the stickiness of its seller base.

The stock surged 18% that day and continued to move higher over that week following a strong earnings report, which seemed to confirm Kelley's recommendation.

In its second-quarter report, Etsy's revenue jumped 39% to $85 million, fueled by 58% growth in seller services revenue, which is now the company's biggest top-line contributor and includes features like promoted listings and direct payment. Etsy's community also expanded briskly in the quarter with buyers increasing 20% and sellers growing 11%, indicating that the fundamentals of the business remain strong.

E-commerce is a competitive business. But Etsy has made a name for itself in the craft marketplace, and its business model should eventually deliver profits if it grows large enough, although it's still operating at a loss. Considering that revenue has jumped 39% through the first half of the year, I'd expect management to raise its guidance again when it next reports earnings in November.

Jeremy Bowman has no position in any stocks mentioned. The Motley Fool owns shares of Etsy. We Fools may not all hold the same opinions, but we all believe that considering a diverse range of insights makes us better investors. The Motley Fool has a disclosure policy.