When a CEO only lasts a year on the job, investors are right to be concerned.

Shares of bookseller Barnes & Noble (BKS) dropped 12.4% in August, according to data provided by S&P Global Market Intelligence, driven by the surprise announcement that CEO Ronald Boire had been fired.

On Aug. 16, Barnes & Noble issued a press release announcing the departure of its CEO. According to the release, the board of directors determined that Boire was not a good fit for the company and that it was in the best interests of all parties for him to be replaced. Executive Chairman Leonard Riggio and other members of the executive management team will assume the duties of the CEO during the search for a replacement.

Barnes & Noble has been suffering from declining revenue for years as book sales moved online. Boire joined Barnes & Noble in September of last year following the company's spinoff of its college bookstore unit. The move to replace him just one year after his hiring came as a surprise to investors, suggesting that the company may be in worse shape than previously assumed.

Barnes & Noble stock has gained back some ground so far in September, surging on a favorable assessment in Barron's and news that sales at bookstores grew by 6.1% during the first six months of the year. 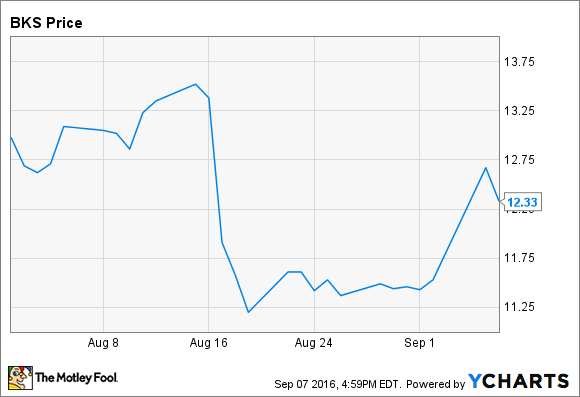 It's unclear exactly why Boire was dismissed, with uncertainty surrounding his departure no doubt adding fuel to the fire. The new CEO will have the challenge of returning the bookseller to growth, a task that will not be easy.

Timothy Green has no position in any stocks mentioned. The Motley Fool owns shares of Barnes and Noble. We Fools may not all hold the same opinions, but we all believe that considering a diverse range of insights makes us better investors. The Motley Fool has a disclosure policy.