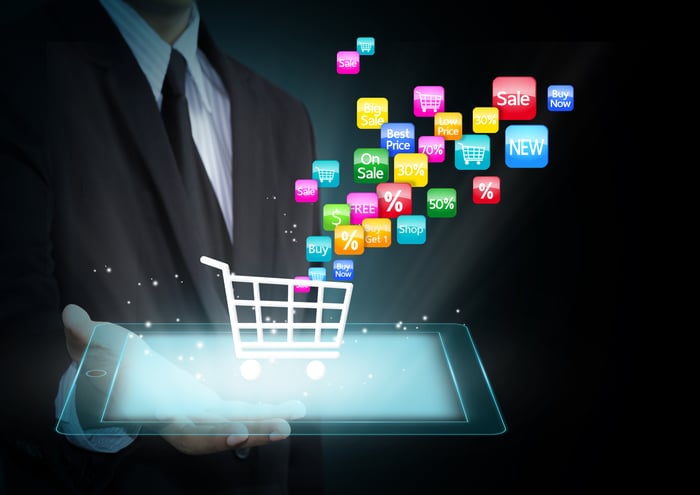 MercadoLibre (NASDAQ:MELI) stock received a massive upgrade last week, as JPMorgan promoted the company from neutral to overweight and raised its price target by more than 50%, from $133 to $200 per share. MercadoLibre stock is trading above $186 per share as of the time of this writing, so JP Morgan's price target is only 7.5% above the current price.

Since MercadoLibre stock has gained over 60% year to date, we could say that the recommendation comes behind the curve. However, the research note from JPMorgan highlights the fact that growth is accelerating, and this is a major positive for investors in the company.

As a general rule, growth tends to slow down as a company gains size and market penetration levels increase over the years. This is just a natural phenomenon in the business world, since sustaining rapid growth in percentage terms is relatively easier when the business is still young and the revenue base is small. In MercadoLibre's particular case, the company operates 100% in Latin America, and many countries in the region are struggling with economic instability lately.

However, you wouldn't have guessed that by looking at MercadoLibre's financial reports for the second quarter of 2016. Not only is the business firing on all cylinders, but growth is even accelerating under challenging conditions.

Items sold in the company's e-commerce platform reached 43.7 million units during the second quarter of 2016, an increase of 44.7% versus the same period one year ago. This is the fastest growth rate that MercadoLibre has reported since 2009.

MercadoLibre owns a digital payments platform called MercadoPago, and performance in this business looks stronger than ever. Total payment transactions were 31.9 million last quarter, a 76% increase versus the second quarter in 2015. Total payment volume reached $1.8 billion, growing 50.6% in dollars and 101.6% in local currencies. MercadoPago's on-platform penetration reached a record high of 75% last quarter, almost 20% points higher than in the second quarter of 2015.

Brazil is MercadoLibre's biggest market, and its economy has been under considerable pressure over the past several years. According to estimates from OECD, Brazil's GDP is expected to contract by 4.3% in 2016, while inflation is forecasted to be in the area of 9.2% during the year.

In spite of these difficulties, MercadoLibre is producing record performance in this key market, and this is one of the main reasons why JPMorgan upgraded the stock. According to analyst Andre Baggio, as quoted by Barron's:

MercadoLibre's best performing operation is Brazil, despite being its largest and likely most penetrated market, signaling that e-commerce is still at initial stages, given 4% of retail penetration. Revenue growth in the country reached 61% year-over-year, reaching one of the highest levels on disclosed record, which we attribute to increased confidence from Brazilian consumers on e-commerce and marketplace platforms in general.

MercadoLibre is the undisputed market leader in all of the main countries where it operates, and the company is consolidating its competitive position on the back of brand recognition generating customer trust. Besides, an expanding ecosystem of services in areas such as payments, shipping, and advertising make the platform increasingly valuable to both buyers and sellers.

The economy in Latin America tends to be particularly unstable, but the e-commerce industry is gaining acceptance among customers, and growth is accelerating. Management calculates that nearly 9.9% of all retail sales in the U.S. will happen online in 2016, while the number is a much lower 3% in Latin America. This indicates that the Latin America e-commerce industry should be fertile ground for growth going forward, and no company is better positioned than MercadoLibre to profit from such opportunity.

MercadoLibre stock is aggressively priced in terms of current earnings, but valuation doesn't look too excessive when factoring growth into the equation. In terms of PEG ratio, which measures price-to-earnings ratio adjusted by growth expectations, MercadoLibre looks, in fact, cheaper than bigger industry players such as Amazon (NASDAQ:AMZN) and eBay (NASDAQ:EBAY).

Looking at the table below, the Latin American player looks fairly priced versus Amazon and eBay, and its market value still has room to run.

In a nutshell, MercadoLibre is gaining steam in spite of growing market penetration and difficult economic conditions in Latin America. The stock is priced for demanding expectations, but its valuation doesn't seem unreasonable for such a promising growth business. With this in mind, it's not too hard to understand why Wall Street analysts are increasingly bullish on MercadoLibre stock.