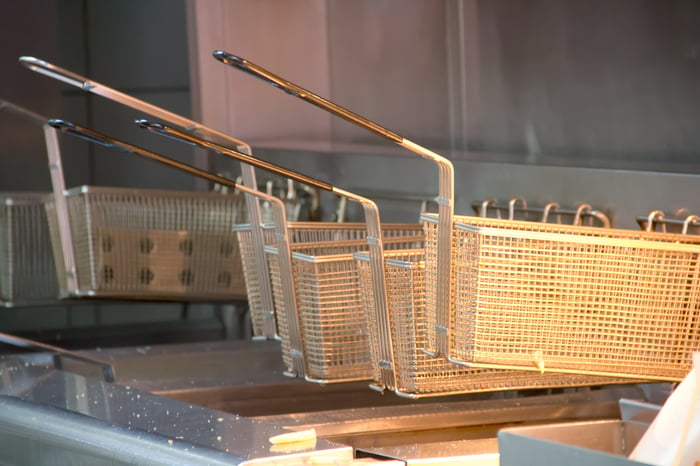 Sales of fryers and other foodservice equipment aren't growing as Manitowoc Foodservice investors may have hoped. Image source: Getty Images.

Sales fell 9.6% to $368.4 million, partly due to the loss of $35.1 million in sales from Kysor Panel Systems, which was sold late last year. But even after one-time adjustments, organic sales still fell 1.5%.

Earnings were particularly bad for Manitowoc, with net income falling from $36.9 million a year ago to $15.1 million, or $0.11 per share, in the quarter. Management said a focus on costs has helped improve gross profits, which is true because gross profit was up 6.1% to $134.7 million in the quarter. But SG&A (or selling, general, and administrative expenses) costs and interest expenses more than offset the gain in margins, which is a cause for concern long term. There's a lot of work to do to de-leverage a balance sheet with $1.4 billion in debt.

The sheer debt load at Manitowoc Foodservice is enough to scare investors away right now. Gross margins may be improving, but they aren't growing fast enough to offset debt or even pay it down in a meaningful way. Management said they paid down $38.3 million in debt during the quarter, but that was only 2.7% of total debt.

Until we see leverage fall in a meaningful way and profitability rise, I don't think this is a stock worth jumping into. There are simply too many risks facing the company, and with organic sales falling and income shrinking, I don't like the trajectory right now.