A multi-decade record as the banking industry's best customers could come to an end for American farmers.

The banking industry is defined by inherent cyclicality. Loan losses generally follow the economy, a reality best painted by banks' collective charge-offs in commercial and industrial (C&I) loans, which rise and fall rapidly with economic growth or decline. 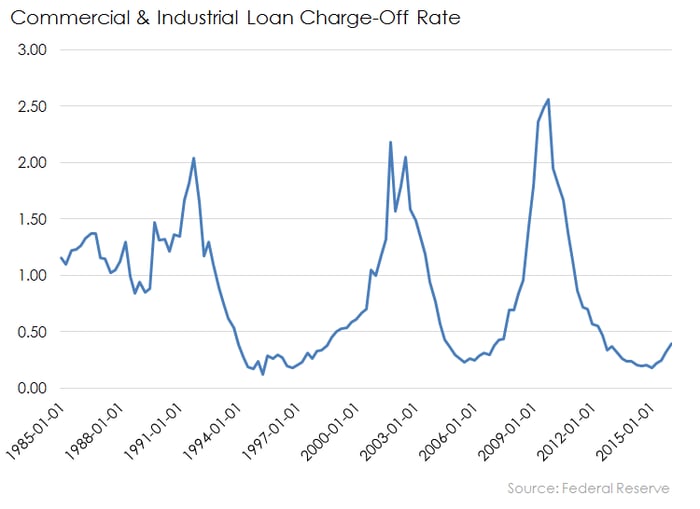 But some loans seemingly escape any relationship with the broader business and credit cycle, at least for a time.

And while the Great Recession brought multidecade underwriting records to an end, one group escaped relatively unscathed: the American farmer.

The truth is that agricultural lending has been good for nearly 30 years. You have to go all the way back to the "Farm Crisis" of the 1980s to see truly elevated charge-offs. (The Farm Crisis was primarily driven by rapidly rising interest rates and declining per-acre profitability, decimating the income of the American farming industry.) 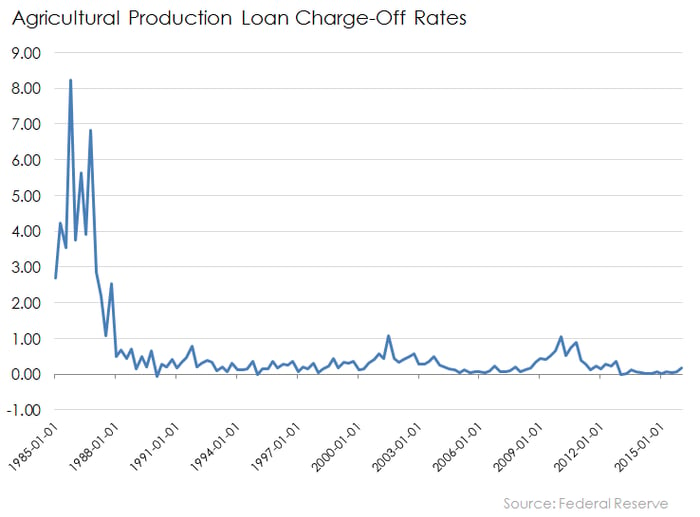 Note that while charge-offs of agricultural production loans rose as high as 1.05% in early 2010, loan losses were considerably lower than losses for generic business loans, which saw charge-off rates peak at 2.5% in 2009. This is especially remarkable when you consider that the primary use for an agriculture production loan is to finance ongoing operating expenses of running a farm, not unlike a C&I loan, which finances similar working capital needs for non-farm industries.

Many of the underlying themes of the housing crisis are at play in the agricultural industry. Falling interest rates and rocketing commodity prices led to rapid increases in the value of farmland, which bailed out would-be bad loans. Meanwhile, banks have experienced decades of exceptional credit performance in agricultural lending, giving them the confidence to extend more and more credit to the industry.

But whether we're talking about single-family homes or loans to cover a farm's operating expenses, all good credit records eventually come to an end. Already, agricultural production loan delinquency rates -- the amount of past-due loans as a percentage of all production loans -- has increased from a seasonally adjusted post-crisis low of 0.67% in 2014 to a recent reading of 1.09%.

Future delinquencies and losses could be headed higher, as Midwest farmland prices fell by 4% from a year ago, the biggest quarterly drop since 1987, according to a recent article by The Wall Street Journal citing Chicago Fed data.

The Kansas City Fed piggybacked weak data from the Chicago Fed with a concerning statistic. Its most-recent report suggested that as many as 22% of farm loans have at least minor repayment problems. The share of farm loans with major or severe repayment problems jumped to 7%, well above the 3% average from 2011 to 2013. Meanwhile, Deere & Company, by far one of the largest beneficiaries of farm profitability, referred to a "global farm recession" on its most recent conference call. Falling prices in everything from corn and soybeans to milk are negatively impacting farms and related industries.

How it affects you

To be fair, outsize farm loan losses wouldn't be an economic disaster in the way the housing market collapse was. Commercial banks hold less than $165 billion in farm-related loans on their collective balance sheets. But bad loans don't need to cause Great Financial Crisis-like economic catastrophe to hurt bank investors.

The most meaningful losses would be seen in the most-exposed community banks, which are largely concentrated in the midwest. A BatchGeo map suggests that more than 1,800 banks have agriculture exposures greater than 20% of their total loans.

All this is to say that investing in banks requires that investors pay more attention to seemingly trivial portions of an income statement or balance sheet than they might for...say, a tech stock or utility. A loan portfolio equal to 5% of assets can effectively make up 50% of a bank's net worth when leveraged 10 times over.

And while future performance in agriculture lending will vary by lender -- loan loss experience is never uniform across the industry -- community bank investors in particular should give agriculture loans on bank balance sheets much more scrutiny than they might have just a few years ago.

Jordan Wathen has no position in any stocks mentioned. The Motley Fool is short John Deere. We Fools may not all hold the same opinions, but we all believe that considering a diverse range of insights makes us better investors. The Motley Fool has a disclosure policy.