Please ensure Javascript is enabled for purposes of website accessibility
Log In Help Join The Motley Fool
Free Article Join Over 1 Million Premium Members And Get More In-Depth Stock Guidance and Research
By Brian Feroldi – Sep 10, 2016 at 7:41AM

Shares rose in response to the company posting a surprise quarterly profit.

Investors in Xencor (XNCR -1.30%), a small-cap clinical-stage biopharmaceutical company, enjoyed a healthy amount of share price appreciation in August. Thanks in large part to the company reporting a surprise quarterly profit, traders bid up the company's stock more than 11% during the month, according to data from S&P Global Market Intelligence. 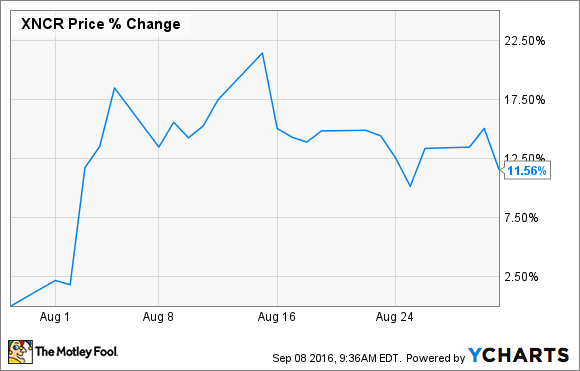 Xencor reported second-quarter revenue of $66 million, which was much higher than the $58.6 million that Wall Street had expected. As a clinical-stage biotech, Xencor earns its revenue primarily through collaboration agreements and milestone payments, and this quarter the company's top line was supported primarily by its partnerships with Novartis and Amgen.

Xencor's quarterly spending on research, development, and corporate overhead were substantially higher than in the year-ago period, but those numbers were quite modest when compared to the company's revenue. Those factors allowed Xencor to book a strong quarterly profit of $47.2 million, or $1.13 per share. That was far better than the $0.18 per share loss that analysts had projected.

Xencor looks to be on solid financial footing, too. The company ended the quarter with $168.8 million in cash on its balance, but that number doesn't yet include the $150 million up-front payment that it just received from Novartis. Adding those numbers together gives the company well over $300 million in cash and equivalents, which the management believes should be enough to fund operations beyond 2019.

Given the surprise quarterly profit and the huge financial runway it's easy to see why shares moved higher in August.

Xencor has done a great job at convincing some of the biggest healthcare companies on the planet to sign on as partners. Currently the company has agreements with the likes of Novartis, Amgen, Johnson & Johnson, Alexion Pharmaceuticals, Merck, Novo Nordisk, and others to develop compounds based on the company's XmAb antibody technology. In total, Xencor believes that it should have 13 company-owned or partnered antibodies in the clinic by 2018, which could give Xencor's investors several shots on goal in the years ahead for indications including Lupus, Asthma, and cancer.

There's no doubt that Xencor exhibits many of the qualities that clinical-stage biotech investors find attractive, but potential shareholders should remember that this company's most advanced compound is still just in phase 2 clinical trials. That means that it will still be several years of additional development work before the company could start generating revenue from product sales. For that reason, I personally plan on keeping Xencor as just a watch list candidate, but I must admit that I'll be following this company with great interest.