Advanced Micro Devices (NASDAQ:AMD) is certainly an alluring company right now. Its shares have gained more than 100% year-to-date, with much of the bullish sentiment riding on the growing popularity and opportunity behind virtual reality.

To help put the recent stock run in perspective -- and to point out some potential pitfalls at the company -- let's take a look at three charts that paint a fuller picture of AMD and the state of its business.

Revenue has fallen fast, but it's improving

Longtime AMD shareholders will know that the company's revenue has been anything but encouraging over the past few years. Since 2014, the top line has declined by about 39% from its high. 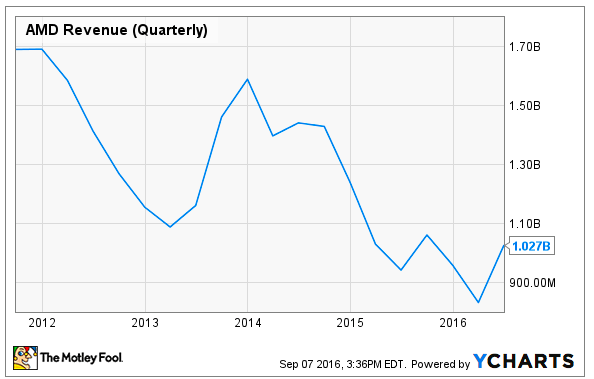 The main reason for the decline came from slowing sales of AMD's PC processors, particularly in notebooks. PC chips are among the company's biggest revenue drivers, and a slowdown in the PC market over the past few years has hurt AMD tremendously.

Despite the bad times, the company is starting to see revenue growth return, thanks to increased demand for chips and a new licensing deal with Tianjin Haiguang Advanced Technology. The latter adds about $52 million to AMD's revenue this year, while the former should help the company's long-term prospects.

AMD certainly isn't out of the woods yet, and investors will need to see the company deliver on promising new chips (like its upcoming Zen processor for servers) and new GPUs to see if the recent rebound is sustainable.

This is changing AMD's focus

A couple of years ago, the company highlighted a few key areas that it would pursue in order to turn around its business. One of those areas of focus is what the company calls immersive platforms, which include PC components and the growing augmented reality (AR) and virtual reality (VR) markets.

The total addressable market for immersive platforms is $20 billion, according to the company, and much of that will come from the AR and VR segments.

At AMD, we frankly aim to directly impact that adoption rate. That's why, for instance, we brought that $200 price point for the RX 480. That broke the paradigm -- that is a VR-ready graphics card. You can have a wonderful VR experience, 90 frames per second, very low latency with that graphics card.

The graph below shows exactly why AMD is pinning some of its future revenue prospects on the AR and VR markets -- because they'll be worth potentially $150 billion by 2020. 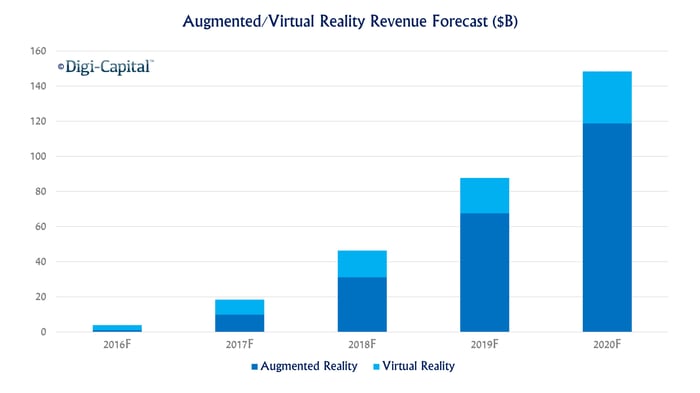 AR and VR certainly aren't the only markets that AMD is focusing on, of course, but with immersive platforms marked as one of the top three focuses for the company over the next few years, it's clear the company is expecting its GPUs to be a major part of its growth story.

This stock is on the move

It's hard to write an article showing some of the most important AMD charts without including the company's massive bull run this year. The stock has already more than doubled in 2016, with a nearly 220% gain over the past 12 months. 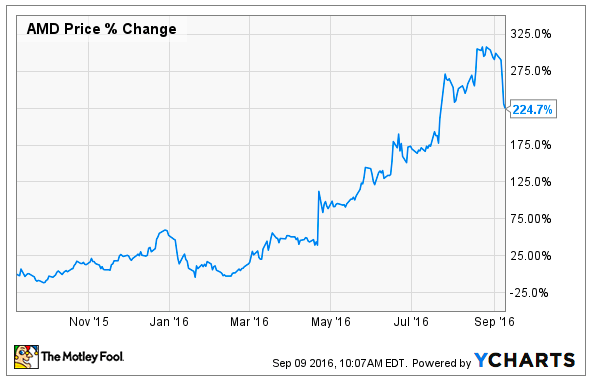 Management and shareholders hope that the upcoming Zen release could steal some of the $18 billion server market away from rival Intel. The company says it has already secured several design wins with original equipment manufacturers and that it will officially launch the chip in the first half of 2017.

AMD certainly has a lot going for it in the GPU, VR, and PC markets -- management is wisely pursuing new areas of growth and re-entering markets where they believe the company can succeed (like server processors).

But without stable revenue, the incredible share price gains would make me hesitant to invest in the company right now. It definitely appears that there are brighter days ahead for the company, but investors should be careful not to overestimate the success AMD will enjoy based on such early efforts with little to show for them.