This article was originally published to Motley Fool Rule Breakers on Aug. 31, 2016.

This Monday, Aug. 29, was an important day for unmanned aerial vehicles. After years of deliberation, the Federal Aviation Administration finalized and enacted its new regulations for the use of unmanned aircraft in commercial operations. In layman's terms, that means the ground rules -- er, air rules -- have been set for companies to begin using drones.

Having this legal framework in place is crucial. Companies now know what's fair game for drones to do, which opens a floodgate of opportunities. Investors have certainly taken notice as well. Goldman Sachs estimates the potential market for drones is $100 billion, while PricewaterhouseCoopers thinks it's worth more like $127 billion.

Regardless of which of these huge numbers ends up being more accurate, it's safe to assume we'll see a lot more aerial machines buzzing around. In my latest Innovation and Industries feature, we'll look at three key areas where we expect drones will have the greatest impact: hardware, data, and e-commerce. We'll also reveal a few drone-related companies that are -- quite literally -- on our radar.

Hardware: the drones themselves 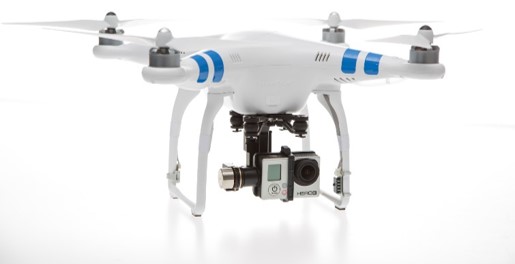 The value chain for unmanned aircraft is still developing, but the first step is the hardware providers. We'll begin by looking at companies that build the internal components, which provide the essential features of the drones themselves.

One of these important features will almost certainly be the capture of high-definition video. Ambarella (NASDAQ:AMBA) has been in this game for years -- it's made systems-on-a-chip to capture and play hi-def video in the earliest DVD codecs, in GoPro's (NASDAQ:GPRO) action sports cameras, and now in autonomous vehicles. Ambarella is making quite a scene in drones as well, with "flying cameras" representing one of its fastest-growing segments.

The ability to maintain an upright position is another key feature, which InvenSense will likely play a role in fulfilling. The company's motion sensors monitor movement, acceleration, and rotation in three dimensions. Just as we've seen augmented reality catching on with smartphones (thanks, Pokemon Go), spacial positioning will help drones make sense of where they are.

Another play could be the companies selling fully assembled drones themselves. French company Parrot and China-based DJI are already well-known global leaders, but GoPro could also be a highly motivated player. Hungry to expand beyond action-sports cameras, the company plans to release its own Karma drone in time for this year's holiday season. Keep all of these in mind for your kids' Christmas lists.

More generally, I believe we'll start to see consolidation. There is less value to a customer in having 1,000 fragmented drone suppliers than in having 100 -- which each provide standardized, software-integrated drones and a greater level of support.

Semiconductor hardware is, historically, a difficult place to be in the value chain. It's fraught with competition, which makes it notoriously difficult for companies to differentiate themselves or avoid pricing pressure. But with the regulatory veil lifted and drones becoming mass-market affordable, we should certainly expect to see volumes take off in the coming years.

Data and analytics: the value of information

With thousands of drones soon hitting the skies, our next question might be "Why are they up there?"

To hobbyists, the answer is likely because they're fun. But businesses are deploying drones to drive profits. For instance, drones can replace human labor. Unmanned aircraft can cover distances more quickly, collect a greater amount of information, and "see" things that a human being cannot (such as infrared or multispectral images).

The data collected will take on many forms, and we expect drones will become embedded within customers' existing workflows. Insurance companies might use drones to survey a home or take detailed pictures of an accident. Utility companies, which need to provide uninterrupted gas or power service, might want to monitor the condition of their assets. These customers aren't necessarily software developers, so there is a huge amount of value in other companies analyzing and interpreting the data collected by drones. Even better if they can also make it understandable and easy to base decisions on.

Alphabet (NASDAQ:GOOG) (NASDAQ:GOOGL) is perhaps the best data-analyzer in the world. To complement its new and growing cloud-computing business, Google will likely find a way to make airspace the next platform for it to collect data from and innovate on.

But it appears Big G also intends to use drones outside of data analytics. The company's somewhat secretive and awesomely named Project Skybender is testing solar-powered drones to deliver millimeter-wave radio transmissions, which could provide internet speeds 40 times faster than what is commercially available today. Alongside Project Loon, Google aims to bring high-speed internet to developing areas of the world without paying for expensive fiber cable or overburdening the already crowded cellular spectrum.

Whatever the application, the data collected by drones could provide new revenue streams and unlock quite a few business efficiencies.

E-commerce: along for the ride 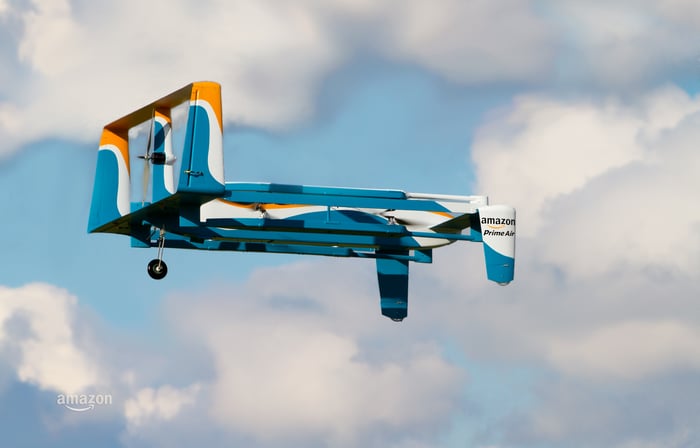 Amazon plans to take to the skies for faster delivery. Source: Amazon Air.

One industry that could certainly benefit from those business efficiencies is e-commerce. Amazon.com (NASDAQ:AMZN) ships over three million packages every day, burning a ton of fuel and requiring countless hours of drivers just sitting in traffic.

Become a member of Motley Fool Rule Breakers, and you get access to other Innovation and Industries articles, including:

CEO Jeff Bezos believes there is a better way. Bezos revealed in late 2013 that his company had been heavily investing in air delivery, which could use electric drones to deliver 5-pound packages within a 10-mile radius in 30 minutes. Just last month, Amazon was granted non-line-of-sight permissions to use drones to deliver packages in the U.K.

This could be a huge development for the king of e-commerce. Amazon paid $13 billion in fulfillment costs in 2015 -- nearly 12% of total sales and 24% more than it spent the previous year. Yet 86% of the company's shipments are less than five pounds. Analysts already predict that drones could eventually deliver packages for less than $1, which would be about one-eighth the cost of FedEx and roughly one-thirteenth the cost of UPS on the ground.

Even a 10% improvement in shipping efficiency would equate to a billion-dollar opportunity for Amazon. Expect drones to widen the stream of the company's bottom line.

We've highlighted three areas where we see drones adding significant value in the coming years. But the applications won't end there. Surfers can now film themselves on Hawaii's Banzai Pipeline. Paramedics can send first aid before they reach the scene of an emergency. The military can minimize lives put at risk. And restaurants can give us a reason to go out to eat again.

Things are really looking up for the drones industry. Keep an eye on the skies for the next generation of flying machines.