It has been a rough year-long stretch for the company, but things are starting to look up again.

High-definition video chip maker Ambarella (AMBA 3.63%) released earnings on September 1, and results showed that declines in revenue and profit over the last year may be bottoming out. What were the highlights from the report, and what should investors take away?

The last page of a difficult chapter

During its second quarter, Ambarella posted revenue of $65 million and profit of $8.6 million. This represents a year-over-year decrease of 23% and 63%, respectively. While those numbers look atrocious compared with last year, declines have come to a stop when measured sequentially quarter-over-quarter.

The company has taken a hit because of a slowdown in high-definition video cameras. Action sport camera maker GoPro (NASDAQ: GPRO) has seen sales take a step back, and orders for Ambarella's chips that power the cameras suffered accordingly.

With the slide in wearable camera sales starting to slow down, progress on the company's other projects was key during the last quarter. Ambarella did not disappoint. With the company's bread-and-butter struggling, the drone, security, and automotive markets picked up the slack.

Our ability to run many of these functions simultaneously provides us with sustainable competitive advantages versus competing solutions. As a result, Ambarella is increasing its market share in all drone categories where HD or Ultra HD video is a requirement.

In IP security, the company had multiple wins during the quarter, especially in China where several new cameras featuring Ambarella chips were released. Apple and Comcast also released new home security products based on the Ambarella hardware platform.

To round out highlights from the quarter, the stock repurchase program that began in June has proven to be a good investment. The company purchased a total of $20.2 million worth of its shares at an average cost per share of $49.80. At the time of this writing, shares are now trading at $68.60, or about a 38% gain on the average purchase price. The board has authorized as much as $75 million to be repurchased through the end of October.

Ambarella avoided giving a detailed outlook for the second quarter because of a drop in orders from a major business partner due to an earthquake in Japan. After getting through the bulk of the disruption from the earthquake, the company resumed guidance again for the rest of the year. Investors were flying blind during the nearly doubling of share value in the last few months, but fortunately, the company's outlook has justified the optimism.

Despite revenue being down 21% over the first six months of the year, management still sees full-year revenue coming in flat to down 5% compared with last year. That would imply strong year-over-year revenue growth in the next two quarters.

The current quarter that ends in October is expected to pull in $95 to $99 million in total revenue. That would be a 2% to 6% gain over the same period last year and would help with offsetting declines in the first six months of the year.

During the last reported quarter, the April earthquake in Japan was having a significant impact on the business. Key partner Sony had a plant that makes image sensing chips with Ambarella parts go offline as a result of the disaster. The recovery efforts are now almost complete, and the plant is expected to be back online by the end of the current quarter in October, which would also aid with revenue recovery through the end of the year.

Wearable cameras have been the main drag on business for a year now, but strong order growth was reported during the earnings call, as sales at GoPro and other end manufacturers pick up again. The security division, which has already begun to grow again, is also notching increases during the quarter under way. The Chinese market for these products is an especially bright spot through the end of 2016.

What investors should do next

With shares pulling back only modestly since the report, investors are feeling optimistic in spite of the year-over-year declines. In what could have been an ugly second quarter for Ambarella, an outlook that was optimistic and in-line with expectations makes gains in shares over the last three months look less absurd -- even warranted. 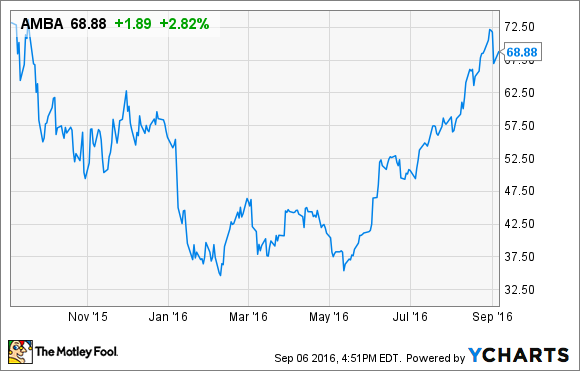 It has been a rough year-long stretch, but investors should be feeling confident again in the company. Any further pullback that may occur in the stock is another opportunity to buy more shares of a company with a bright future ahead.

3 Things to Watch in the Stock Market This Week
357%