Crude oil prices hit the skids today, with the U.S. benchmark WTI slumping 3% to below $45 per barrel. That pushed crude to its lowest settlement in a week, and when combined with a market sell-off, sent oil stocks tumbling. Several slumped by double digits at one point in the day, led by Cobalt International Energy (NYSE: CIE), Chesapeake Energy (CHKA.Q), Nabors (NBR -1.63%), and CONSOL Energy (CNX -1.88%). 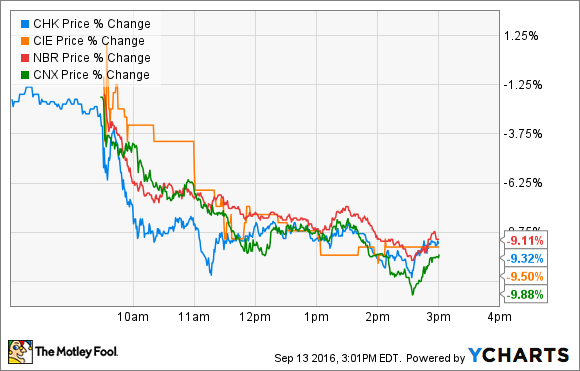 Driving the downdraft in the oil market was a gloomy report from the International Energy Agency (IEA), which projects an unexpected slowdown in oil demand growth. The IEA revised its 2016 demand growth outlook downward by 100,000 barrels per day to 1.3 million BPD. In addition, it revised its 2017 forecast lower by 200,000 BPD to 1.2 million BPD. This data came on top of a bearish report from OPEC this week in which the cartel upwardly revised its outlook for supplies. These two reports combined to suggest that the ongoing oil glut could persist well into next year.

This bearish data walloped Cobalt, Nabors, and CONSOL Energy, which are relying on an improving oil market to drive future results. As an offshore oil project developer, Cobalt International Energy needs higher oil prices so that it can sell its Angolan assets for top dollar, which would give it the cash it needs to reinvest in its Gulf of Mexico development projects. Meanwhile, oil-field service company Nabors needs higher oil prices so that its customers will restart their drilling activities, which would re-energize demand for its services. Finally, CONSOL might be known for its natural gas production, but prices for the NGLs it produces correlate with the price of oil, not gas, so slumping oil impacts its NGL margins.

Unfortunately, sliding crude wasn't the only weight on Chesapeake Energy's stock today. That stock got hammered after FBR Capital initiated shares at underperform and slapped it with a $5 price target, which was $3 per share below where the stock started the day. While FBR praised Chesapeake's efforts to get its debt under control, it said that the company's current hole is "too deep to dig out of." It believes Chesapeake will remain under stress for quite some time, especially if the oil glut persists.

The oil market just is not healing as fast as analysts were predicting, which is weighing on the stocks of energy companies that need prices to go higher. Until this glut abates, investors can rest assured that oil prices and oil stocks will remain very volatile, especially whenever new data gets released.