Are the billionaire bulls or bears right about Gilead Sciences? 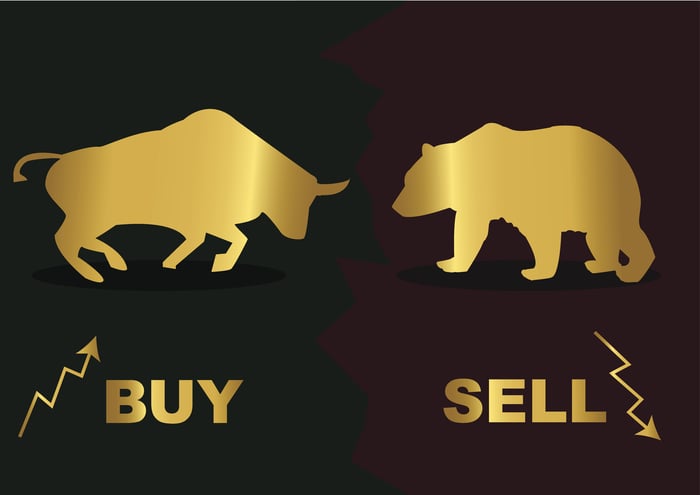 I don't subscribe to blindly following what investment firms with billions in their portfolios do. However, it is interesting why they might have such differing views about Gilead Sciences. Is now really the time to buy Gilead -- or should investors sell?

Let's first look at why investors might want to consider selling their Gilead Sciences stock. It's no secret that Gilead's powerhouse hepatitis C drug, Harvoni, has lost momentum. Sales for Harvoni in the second quarter declined almost 29% year over year.

Gilead's shares soared over the past several years on the strength of its hepatitis C franchise, including Sovaldi and Harvoni. However, sluggish sales for Harvoni in 2016 have caused Gilead's stock to fall more than 20% since January. The reason behind this sales weakness could make some investors think that the biotech's best days are behind it.

What about Gilead's other drugs? Its HIV franchise is doing well overall, but sales for Atripla and Stribild were down in the second quarter compared to the prior-year period. Even with its HIV drugs and other products rocking along, though, Harvoni and Sovaldi account for over half of Gilead's total sales. Weakness with hep C means weakness for Gilead as a whole.

Wall Street analysts, recognizing the competitive realities for Gilead in hepatitis C, now project that the big biotech will see anemic earnings growth over the next five years. Investors looking for the kind of stock returns provided by Gilead before this year probably can't be blamed if they look elsewhere.

On the other hand, Gilead is trading at a super-low price-to-earnings multiple of 6.85. You can count the number of biotech stocks with billions of dollars in annual sales with that low of an earnings multiple on one hand -- and still have several fingers left over.This low valuation seems to largely discount the prospects for Gilead's pipeline. But those prospects appear to be quite good.

Gilead currently claims 33 clinical trials in progress plus one chronic hepatitis B drug --tenofovir alafenamide (TAF) -- awaiting regulatory approval. Seven of those clinical studies are in phase 3. One of those late-stage drugs that should be key to Gilead's continued success in the HIV market is bictegravir.

Perhaps the biggest potential winner in the pipeline, however, is in phase 2 right now. Simtuzumab, which targets treatment of nonalcoholic steatohepatitis (NASH), could hit peak annual sales of $12 billion, according to BMO analyst Ian Somaiya. Anti-inflammatory drug filgotinib, soon to commence a phase 3 trial, could be another possible blockbuster drug waiting in the wings.

The biotech doesn't have to wait for positive results from some of its newest drugs on the market. HIV drug Genvoya won FDA approval in Nov. 2015 and generated sales of $460 million in the first half of this year. Hepatitis C drug Epclusa roared out of the gate, making $64 million in three days of selling during the second quarter. Epclusa could prove to be a big help to Gilead in battling Merck. Unlike Zepatier (or Harvoni), Epclusa addresses all major genotypes of hepatitis C. Gilead has also priced the drug more competitively than Harvoni or Sovaldi.

Get paid to wait

Investors who are bearish on Gilead's prospects can point to the company's current hepatitis C challenges. Those who are bullish can underscore the biotech's cheap share price and promising pipeline. I think the bulls can also add a few other points to their case for Gilead.

First, Gilead's dividend currently yields 2.45%. The company increased its dividend by 10% in February. With Gilead's payout ratio below 16%, I think more dividend hikes will come.

Second, Gilead bought $9 billion of its stock back in the first half of 2016. Around $8 billion of that total came under a stock repurchase authorized last year. Gilead approved another $12 billion stock buyback in February, so investors should reap the benefits over the next few quarters.

You could look at Gilead Sciences as a lost cause and sell the stock like Omega Advisors and Two Sigma Investments. However, I suspect that Highbridge Capital Management and Platinum Investment Management have the better idea. At current valuations, I think investors are getting a bargain on Gilead with its still-impressive earnings, solid new drugs on the market, and promising pipeline. Let Gilead pay you (through dividends and share buybacks) to wait on its pipeline products to blossom.