Please ensure Javascript is enabled for purposes of website accessibility
Log In Help Join The Motley Fool
Free Article Join Over 1 Million Premium Members And Get More In-Depth Stock Guidance and Research
By Travis Hoium – Sep 13, 2016 at 10:00AM

More visitors are going to Macau each year, which could show some surprising strength in the region.

Gaming stocks with exposure to Macau have had a rough ride the last two years, decimated by falling gaming revenue in the region. Wynn Resorts (WYNN 4.36%) and Melco Crown (MLCO 9.86%), who make a majority of their revenue in Macau, have fallen the most, but Las Vegas Sands (LVS 1.11%) and MGM Resorts (MGM -2.27%) have seen operations suffer as well. Amid all of the turmoil, there's still a reason to love Macau's gaming stocks. 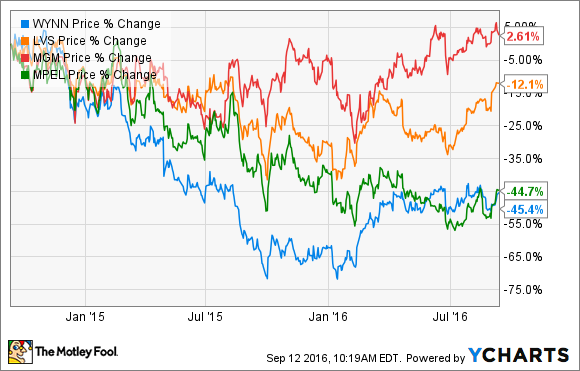 The narrative in Macau over the past two years has been about the decline in gamblers, but it hasn't focused much on those who aren't gambling. The majority of the decline comes from the VIP market, which used to account for about 70% of all gambling in Macau. But a combination of a crackdown on corruption in China, less bullish wealthy Chinese gamblers, and the collapse of some junkets has really hit the VIP market hard.

What gets less coverage is that mass-market consumers from China are still flocking to Macau. According to the China Tourism Academy and UnionPay International, China's visitors to Macau grew 17.1% in 2015 and was among the top three tourist spots with Hong Kong and Taiwan. VIP gamblers may not be visiting Macau in the numbers they used to, but people are still traveling there, and that's good for gaming companies.

Why the mass market is great for Macau

You can see the different trends in mass-market and VIP gaming in the chart below. Mass market baccarat play has fallen 33% in the first half of 2016 compared to two years ago, but VIP play is down 52%. And mass-market play has stabilized over the past year. 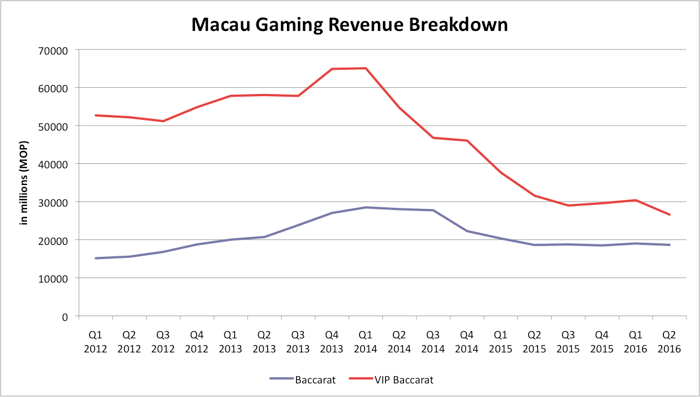 There are a couple of reasons the mass-market trend is important. The first is that there are far more mass-market players than VIP players, so the above trend will help diversify Macau's customer base.

More importantly, mass-market players are much higher margin than VIP players. Like in Las Vegas, VIPs can demand perks for playing like hotel rooms, free entertainment, and even discounts on their gaming losses. Plus, the junket is compensated for bringing players in. Growth in mass market should mean more of the gambling dollars will flow to the bottom line.

A shift in how investors should look at Macau

Macau has long been judged by its top-line gaming revenue numbers, which were dominated by VIP players. But the trend is shifting toward mass-market players, and that's actually good news for Las Vegas Sands, Wynn Resorts, Melco Crown, and MGM Resorts. It could mean financial results will start to improve in the region over the next few quarters. Maybe now is the time to get bullish on Macau and its growing mass market.