Apple (AAPL 0.99%) introduced its new iPhone 7 and iPhone 7 Plus smartphones during its Sept. 7 launch event. The new phones, as I've written about previously, appear to be quite strong offerings, with substantial improvements made across the board.

Interestingly, along with a flurry of feature improvements, Apple also rolled out two new finishes -- an elegant-looking black model and a glossy jet black. It would seem, however, that Apple may have substantially underestimated the demand it would enjoy for the jet-black variants of its new iPhones.

Let's take a closer look at what's going on and what the implications could be for Apple's business.

According to Apple's website, orders placed for the iPhone 7 Plus in jet black -- whether they're for the 128 gigabyte model or the 256 -- won't even ship to customers until sometime in November: 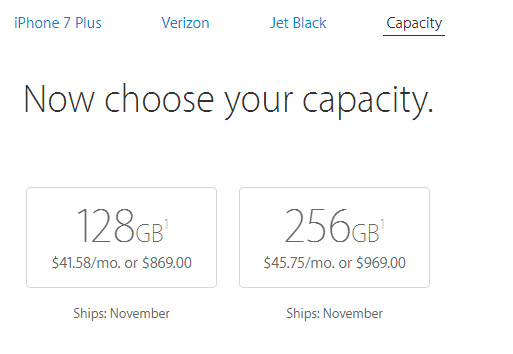 The good news and the bad news

The bad news, though, is that Apple seems to have grossly underestimated the demand it would see for this particular variant of the iPhone 7 Plus. Barring that, Apple simply can't make enough of these phones to meet demand in a timely fashion, perhaps because the device is simply more difficult to manufacture than the other versions.

In the best cases for Apple, potential jet-black iPhone 7 Plus buyers will either place their orders and choose to wait the additional two months for the device or simply choose a more readily available iPhone 7 Plus variant.

In a not-so-good case for Apple, frustrated potential buyers could opt to buy smartphones from a competitor. That could account for a reasonable amount of the popularity that Samsung (NASDAQOTH: SSNLF) is apparently enjoying.

Not the end of the world, but a suboptimal situation

At the end of the day, being supply constrained on a particular iPhone 7 Plus model is hardly cause to proclaim doom and gloom for the iDevice maker. However, given that Apple really needs to pull out all the stops to try to drive iPhone growth during this product cycle -- and the new iPhone 7 and 7 Plus might be good enough to do just that -- supply constraints are simply less than ideal.

Apple's job now will be to scale up production of the jet-black iPhones to try to bring supply in line with demand as quickly as possible.