After the company reported second-quarter revenue that was shy of industry watchers' estimates, shares in Diplomat Pharmacy (DPLO) fell 12.9% in August, according to S&P Global Market Intelligence. 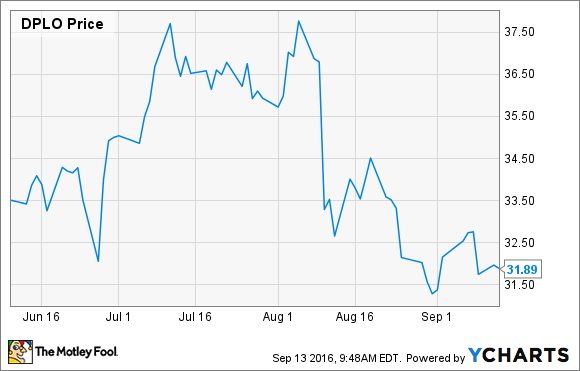 The pure-play specialty-pharmacy operator reported second-quarter sales of $1.09 billion, up 34.7% year over year, and non-GAAP earning per share of $0.23, up from $0.16 per share in the prior-year period. Sales were $20 million shy of consensus estimates. However, EPS was 9.5% better than Wall Street was guessing.

Mergers and acquisitions, not volume growth, contributed heavily to the top-line increase; however, organic growth was still solid at 23%.

Prescription volume inched up only 3% year over year, but that figure doesn't tell the whole story. Diplomat Pharmacy exited the high-volume, low-profit compound business in 2015, and that move offset rising demand in the company's oncology and specialty infusion businesses. Oncology revenue grew 38% and the specialty infusion segment grew 22% year over year during the quarter, and if we exclude the impact of the compounding business, volume increased 13% from a year ago.

Diplomat Pharmacy has been riding tailwinds associated with growing demand for high-price biologics, but second-quarter results suggest there's some slowing this year from 2015. Organic sales growth totaled 31% and prescription growth was 14% in 2015, both of which were better than the second-quarter results. Investors will also want to keep an eye on gross margin to see if it stabilizes. Last quarter, it fell to 7.6% from 8.6% in the same quarter of 2015.

Nevertheless, there are a ton of biologics in development industrywide, and Diplomat Pharmacy's 3% market share suggests there's plenty of expansion opportunity. Furthermore, there's a limited supply of pure plays in the industry, which could make Diplomat Pharmacy an attractive takeover candidate someday.

Overall, the stock's 27.4 forward P/E ratio means it isn't cheap, but I think this company's potential to capture more market share and expand earnings makes it a savvy buy for growth investors.

Todd Campbell has no position in any stocks mentioned. Todd owns E.B. Capital Markets, LLC. E.B. Capital's clients may have positions in the companies mentioned. Like this article? Follow him on Twitter where he goes by the handle @ebcapital to see more articles like this. The Motley Fool recommends Diplomat Pharmacy. We Fools may not all hold the same opinions, but we all believe that considering a diverse range of insights makes us better investors. The Motley Fool has a disclosure policy.