Apple (AAPL -0.34%) has now officially posted two back-to-back quarters with year-over-year iPhone unit sales declines. This inevitability has been expected for quite some time as the product matures and smartphone adoption has soared in developed markets. There's still quite a bit of work for the Mac maker to do on the emerging market front, but I think it's safe to say that there's no more low-hanging fruit left in the global smartphone market.

But are iPhone unit sales really peaking, or can the iPhone 7 (and future models) potentially return Apple back to growth one day?

If you look back at the past couple of upgrade cycles, you'll notice that iPhone launches tend to perform in pairs due to Apple's "s" cycles. A redesigned new model is introduced, pushes unit sales to new highs, and the subsequent "s" cycle roughly matches it the following year. This makes sense considering the average user upgrades their phone every two years, and this two-year "s" cycle was timed perfectly to capture most users in alternating years. 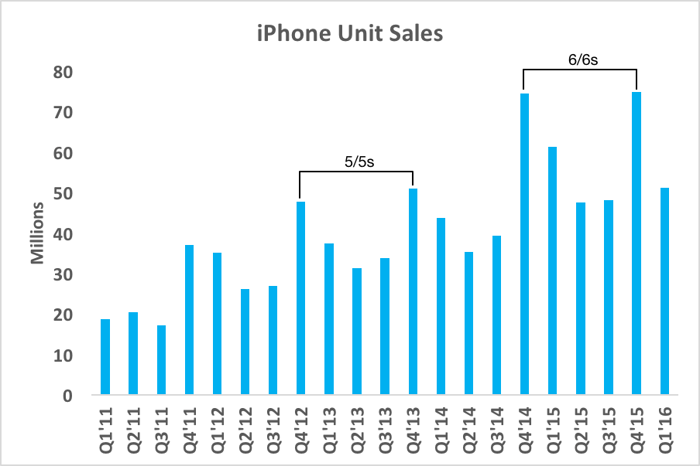 The 4s cycle in 2011 was a bit different for a couple of reasons. At that time, Apple was still expanding carrier relationships, making year-over-year comparisons less comparable. On top of that, Steve Jobs died the day after the 4s was introduced, triggering a global outpouring of support and sympathy for Apple's fallen founder. This likely resulted in additional sales. iPhone unit sales more than doubled year over year in Q4 2011 (up 128%) following Jobs' passing.

The pattern for the 5/5s and 6/6s launches is apparent, though. If it continues, all of the people that upgraded to the iPhone 6 in 2014 are all due for an upgrade to the iPhone 7. By the looks of it, initial demand is quite strong as well, with numerous carrier partners touting strong preorder activity. Optimism around the iPhone 7 has even now pushed Apple shares to fresh 2016 highs.

However, there is a curve ball. This is the first time that Apple will use the same overall design for a third year. As unheard of as keeping designs around for two years was in the smartphone industry (no other OEM could get away with this), keeping a design for three is unprecedented. It's not clear how much value the market allocates to fresh designs, since Apple is offering other reasons to upgrade. The iPhone 7 is a home run for people that loathe headphone jacks, for instance.

All of the aforementioned considerations about growth constraints still apply, so Apple still needs to focus on winning over Android switchers in developed markets while also catering to first-time adopters in emerging markets. But if iPhone launches continue to perform in pairs, the iPhone 7 may be able to reclaim growth.