Please ensure Javascript is enabled for purposes of website accessibility
Log In Help Join The Motley Fool
Free Article Join Over 1 Million Premium Members And Get More In-Depth Stock Guidance and Research
By Matthew DiLallo – Sep 14, 2016 at 8:10AM

It's larger than rival streamers Royal Gold and Franco-Nevada, but that doesn't mean it outpaces them in every metric.

Silver Wheaton (WPM -1.95%) calls itself the world's largest precious metals streaming company -- and justly so: It clearly ranks ahead of competitors Royal Gold (RGLD -1.64%) and Franco-Nevada (FNV -0.83%) in size. Further, it also ranks first in several key valuation metrics. That said, there are a couple of metrics were it's not No. 1 in its space, and it is in those differences that we see that there is still some room for the company to improve in the future.

Taking the gold on size

As the slide below shows, Silver Wheaton is the largest precious metal streaming company by all the key metrics: 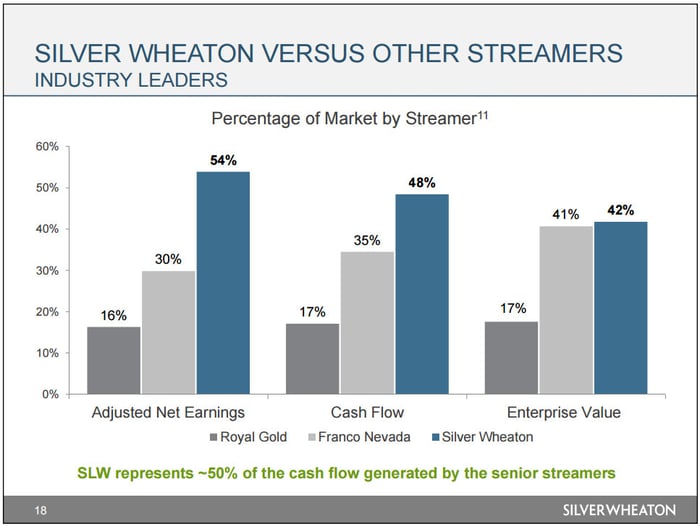 As you can see, Silver Wheaton produces a whopping 54% of the adjusted net earnings within the senior streaming group, and delivers 48% of the trio's cash flow. Finally, it is the largest streamer by enterprise value, with its $12.6 billion value slightly eclipsing Franco-Nevada's $12.54 billion total.

That small margin of difference in enterprise value is worth noting, though, because Franco-Nevada produces roughly a third of the adjusted earnings and cash flow of the segment. It implies that Franco-Nevada is overvalued relative to Silver Wheaton, all else being equal.

Taking the gold on valuation

That over-valuation is what this next slide seems to indicate: The data shows that Silver Wheaton has the lowest valuation of the trio: 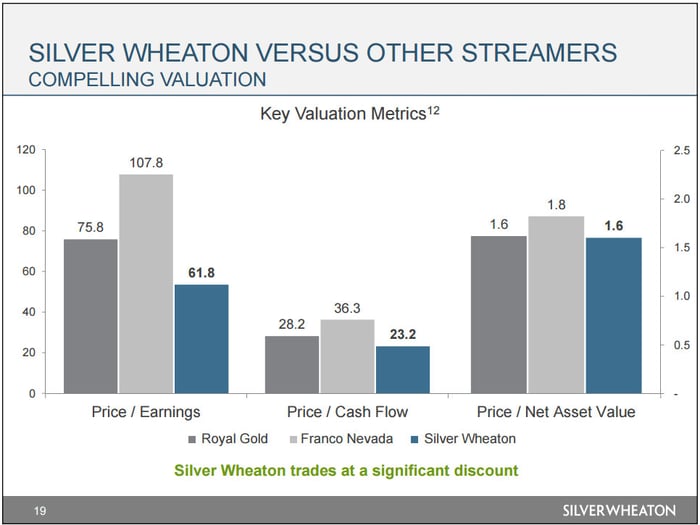 Both Franco-Nevada and Royal Gold trade at a premium valuation based on earnings and cash flow multiples. Meanwhile, Silver Wheaton's stock valuation based on asset value is in line with Royal Gold, while Franco-Nevada trades at a premium. All this despite the fact that Silver Wheaton has the highest cash flow and earnings of the group, along with the highest-quality asset portfolio due to its diversification across several high-quality mines.

Further, unlike its rivals, Silver Wheaton has 100% exposure to precious metals. Contrast this with Franco-Nevada, which derives 5% of its revenue from oil and gas, 6% from platinum group metals (PGMs), and 1% from other sources. Royal Gold, likewise, is exposed to other commodities like zinc, lead, nickel, and copper, though its aim is to get 75% of its revenue from gold going forward. This exposure to other commodities has the potential to act as a drag on earnings because they tend not to be as correlated to silver and gold prices.

While Silver Wheaton is the largest streamer by size and the cheapest by valuation, it does not rank at the top in every category. One area where it finished last is dividends: 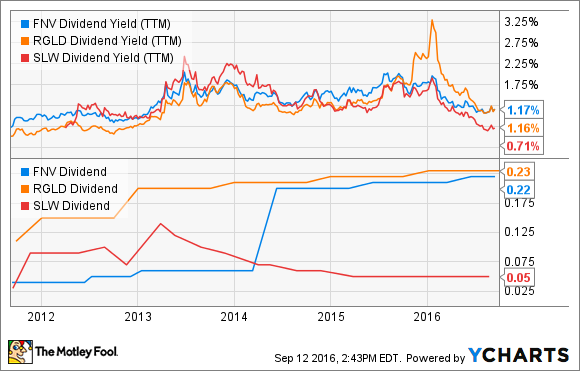 Not only does it have the lowest current yield of the trio, but its payout declined in recent years while both Royal Gold and Franco-Nevada have steadily increased theirs. This is partially due to Silver Wheaton's policy to pay out 20% of its trailing twelve-month cash flow in dividends, while Royal Gold's dividend, for example, represented 27% of its adjusted operating cash flow last year.

Meanwhile, Silver Wheaton's net gold equivalent ounces per million shares ranks at the bottom of the pack as the chart on the right-hand side of the slide below shows: 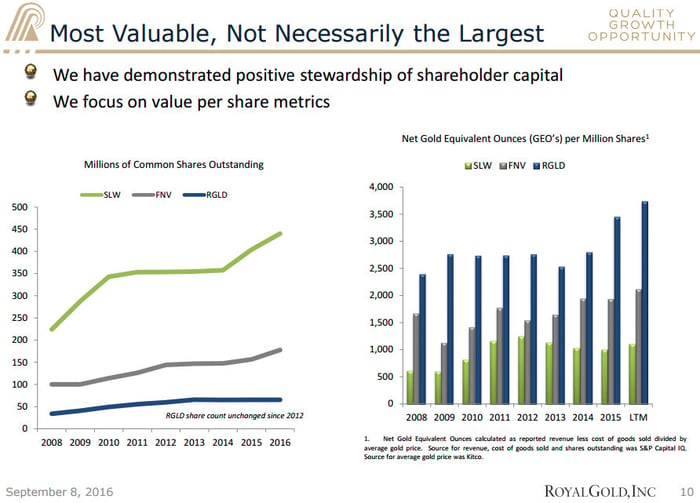 This last-place finish is partially due to Silver Wheaton's liberal use of stock issuances to fund acquisitions over the years, as can be discerned from the chart on the left-hand side. Further, the calculation Royal Gold uses to obtain the net gold equivalent slightly skews the numbers for gold-focused streamers because the margins on gold are wider than those on silver, which is where Silver Wheaton earns roughly half of its revenue. Still, this ranking shows that Silver Wheaton is not as good at its rivals at creating value on a per share basis.

While Silver Wheaton clearly ranks as the largest precious metal streamer, it is not necessarily the best company among its peers at creating value for shareholders. That along with its smaller, inconsistent dividend could explain why it has a cheaper valuation relative to them. This shows why it is important to dig deeper into the data behind such rankings, because they often don't tell the whole story.

Matt DiLallo has no position in any stocks mentioned. The Motley Fool owns shares of Silver Wheaton. Try any of our Foolish newsletter services free for 30 days. We Fools may not all hold the same opinions, but we all believe that considering a diverse range of insights makes us better investors. The Motley Fool has a disclosure policy.