Unlike Apache these oil and gas stocks deliver consistent dividend growth along with a compelling current yield.

Apache (APA -3.17%) does many things well, but paying a compelling dividend is not one of them. That is why income investors should not give Apache much thought because there are better dividends to be had elsewhere in the oil and gas sector. Three that stand out are ExxonMobil (XOM -3.00%), Occidental Petroleum (OXY -2.92%), and Suncor Energy (SU -3.42%).

Drilling down into Apache's dividend

Apache has paid dividends every year since 1965, however, as the chart below shows, the company does tend to hold its payout flat when oil prices slump: 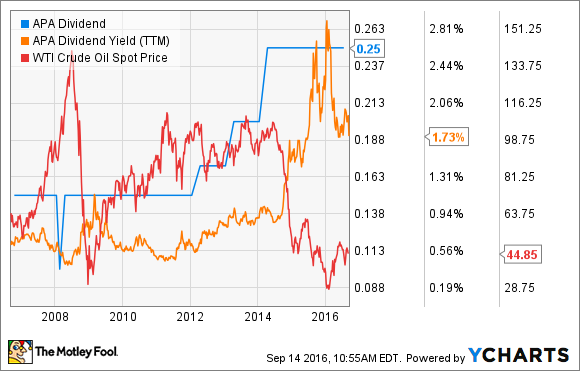 While that stability is admirable and better than many of its rivals, the company's lack of consistent growth is a big reason why its payout is a pretty paltry 1.7%. For most income investors a low yielding dividend with inconsistent growth just isn't very compelling.

Contrast this with oil giant ExxonMobil, which has not only paid uninterrupted dividends for more than 100 years, but its recent 2.7% increase marked its 34th consecutive annual payout increase. That puts it in an elite class of dividend aristocrats. ExxonMobil's steady increases have added up over the years with its current yield a much more generous 3.5%.

Two factors drive ExxonMobil's ability to pay a compelling and growing dividend. First, unlike Apache, it is a fully integrated oil company, which means it owns refining and chemical assets that tend to act as a cash flow hedge when oil prices decline. Second, ExxonMobil is an excellent capital allocator and leads the industry in returns on capital employed. Those higher returns along with stabilizing cash flow from its integrated assets provide it with more cash flow, enabling it to pay a better dividend.

Like ExxonMobil, Occidental Petroleum is committed to growing its payout on an annual basis. Earlier this year it announced its 14th consecutive dividend increase, boosting the payout by 1.3%. While that was not a big increase, Occidental Petroleum was one of the few oil companies to announce an increase amid a sea of decreases. As a result, the company currently pays a very lucrative 4.15%.

One of the reasons Occidental Petroleum is in the position to pay a growing dividend is that it too is an integrated oil company. While it does not own refineries like ExxonMobil, it does operate chemical and midstream businesses, which generate steady cash flow. Meanwhile, several of its foundational assets are cash flowing assets. For example, its Al Hosen gas project in the Middle East should generate $300 million to $600 million in annual operating cash flow. Further, it also owns several high-margin mature assets such as its enhanced oil recovery business in the Permian Basin. These assets generate an ample supply of cash flow to support the dividend.

Leading Canadian oil producer Suncor Energy also pays a pretty compelling dividend, which currently yields 3.36%. While it has not increased its payout during any of the past four quarters, the company does have a long history of dividend increases, with its payout up 150% in the last five years. Further, it has grown its dividend for 14 consecutive years, and there is still time in 2016 to keep that streak alive as long as it increases the payout by year-end.

Driving Suncor Energy's ability to pay a growing dividend is its integrated business model. Like ExxonMobil, it owns several refineries, which helps it capture more value per barrel. Further, the bulk of its production comes from low decline oil sands assets, meaning Suncor's production is very stable. Because of that, the company does not have to invest as much capital to offset declining production from its legacy assets. That frees up more of its cash flow for dividends or investments that drive growth. With several major projects already under way the company estimates that its production will grow by a 6% compound annual rate through 2019. That increasing output should take Suncor Energy's dividend up with it.

Apache's lack of integrated assets hinders its ability to pay a generously growing dividend. Because of that, investors looking for yield should forget about its stock and instead look at its integrated peers that have a history of increasing their lucrative payouts each year. Those companies will likely supply investors with far more income over the long-term.

Matt DiLallo has no position in any stocks mentioned. The Motley Fool owns shares of ExxonMobil. We Fools may not all hold the same opinions, but we all believe that considering a diverse range of insights makes us better investors. The Motley Fool has a disclosure policy.