Square Capital has proved incredibly successful, but growing outside its customer base could pose significant risks. 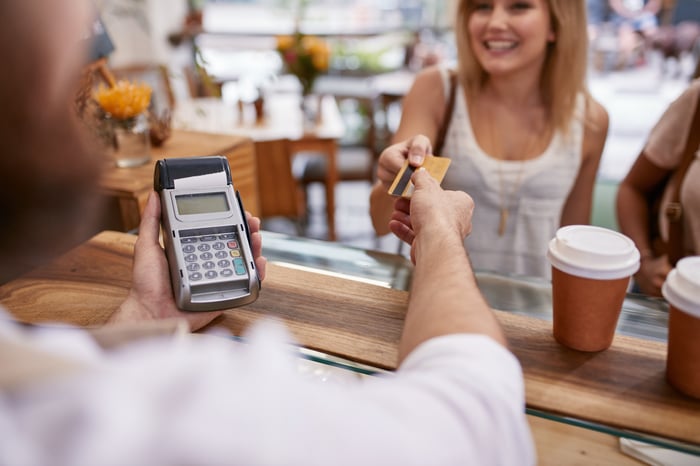 When Square (SQ -0.84%) CFO Sarah Friar was asked in the company's most recent earnings call about the prospect of extending Square Capital beyond the company's current customer base, she said the company needs to "look at all alternatives" on "how can we grow the overall portfolio." She elaborated:

It may be using the muscle of what we know in terms of if we have payments data, how we are able to underwrite merchants? Does that need to be our payments data? Not necessarily.

"Not necessarily" using Square's own payments data? That seems like a big red flag to me.

Giving away an advantage

As a payment service processor, Square analyzes payment data that it has unique access to, and it uses that information to offer what's usually a micro-loan to its customers. Rather than fronting the loans, Square is a conduit matching outside investors with small businesses. The loans are usually repaid by automatic deduction, as a percentage of the customer's daily gross payment volume.

This system has produced great results for both the small companies involved and for Square, with a 4% default rate that beats August's national average rate of 8.7% for business loans. In the past year, the amount lent through Square Capital has grown 123%, and now the "software and data" division -- of which Square Capital is a part -- accounts for 18% of Square's adjusted revenue.

Square is inextricably linked to the companies it serves by virtue of being inside their day-to-day operations -- not just through transaction services but also with its many software offerings, such as Payroll, which handles employee remuneration, and Invoices, which facilitates business-to-business transactions. Though Square has not recently updated its customer numbers, at the time of the company's IPO (November 2015), it had 2 million active customers using its products. Every time each of those 2 million customers accepts a payment, Square receives a cut of the transaction and, just as importantly, it gains vital insight into that merchant. Moreover, the data Square uses to analyze loan eligibility is easy to obtain, accurate, and up to date.

That amounts to a perfect recipe for making small-business loans. So if Square doesn't "necessarily" need to use its own data, as Friar suggested, it seems as if the company could be sacrificing its most crucial advantage.

The "muscle" that Friar said Square has at its disposal is essentially the system it uses for underwriting -- the data-analysis algorithms that review candidates for loans and weigh risk. Her statement suggests that Friar views this system as a core advantage.

And it could be it is more important than even the data itself or Square's relationship with its customers. Small-business loans are traditionally risky and unprofitable, which is why Square has such a great opportunity if it can be successful in this niche. Financial institutions have been trying to perfect underwriting for years and still struggle to identify the winners -- the recent average 8.7% default rate speaks for itself.

Earlier this year, Friar described Square as "a commerce ecosystem at the end of the day, not a financial institution." The company does seem to have the banks beat in terms of finding good loan candidates within its customer pool, but outside of the company's sphere of influence could it beat the banks at their own game?

Either way, going outside its customer base would mean using data from a third party, the quality of which could vary. Square has already partnered with Intuit (NASDAQ: INTU) on the company's QuickBooks service, but this type of data would potentially be out of date and not to the same level of granularity as the company's own information. Upserve is another possibility. Offering payment service processing to the restaurant trade, much like Square but without a lot of the added features, Upserve could provide data similar to Square's and so possibly could replicate Square's underwriting success. But repayments wouldn't be as slick, and it would still add a third party that would take its own cut.

Two key questions arise. First, could Square work successfully with data from other sources, some of it potentially of lower quality? Second (a multipart question), would Square's investors like this move? Would they trust the data, and would they be content to have customers outside Square's sphere of control?

If the average default rate rose or Square found it difficult to attract the lenders it matches with its customers, such a move could be detrimental. Being literally inside its customers' operations creates symbiotic relationships. Intelligent analysis of data leads to informed offers of capital to its customers, and its customers in turn use the capital to expand, buy inventory, and grow, thus increasing gross payment volume and, consequently, Square's profits. This system is Square's greatest asset. In an underserved and traditionally overlooked segment of commerce, Square is offering uniquely value-added services that are enabling small and medium-sized companies to keep pace with, if not accelerate past, big businesses.

That's why the idea of offering loans outside the company's customer base seems shortsighted, especially given the demand potential within its current customer base. Square might overplay its best hand if it gives away this key advantage.

TMFSarahp has no position in any stocks mentioned. The Motley Fool owns shares of and recommends Intuit. We Fools may not all hold the same opinions, but we all believe that considering a diverse range of insights makes us better investors. The Motley Fool has a disclosure policy.